Owners of expensive family homes are being forced to cut prices as they struggle to sell them, a new report from industry insiders revealed today.

Homes in the middle to high-end tiers of the market are causing the most problems when it comes to sluggish house price growth, says the monthly Royal Institution of Chartered Surveyors report.

A net balance of 75 per cent of surveyors who responded to the Rics’ latest survey said properties on sale for between £500,000 to £1million are being sold for less than the original asking price. 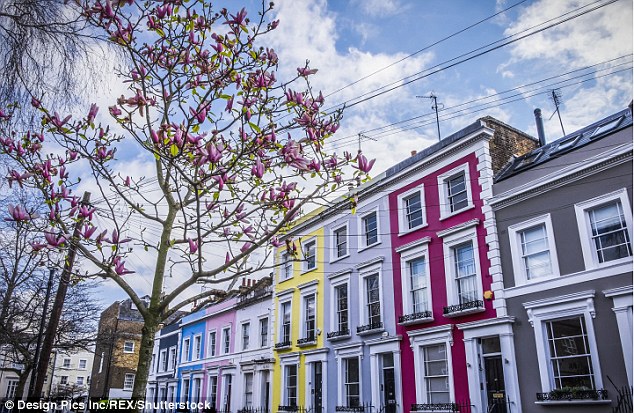 Sluggish: Property price growth across the country fell to its lowest since 2012 last month

Sixty-nine per cent of respondents said homes with initial asking prices of £1million or more are being sold for less than they went on the market for.

In contrast, nearly 60 per cent of experts said sales prices were either at the same level or slightly above asking prices for properties initially on sale for £500,000 or less.

Property price growth across the country fell to its lowest level since 2012 last month, RICS said.

April saw a slight decline in prices, but it is dwindling values in London that are having a large effect on the overall picture across Britain.

In London, a net balance of 65 per cent of respondents said they had seen prices in the capital fall last month, marking the weakest reading since February 2009.

Lower prices were also still being recorded in the South East. Overall, a net balance of eight per cent say prices are falling across the country – the lowest reading since November 2012.

Barry Bhalla, founder of Acrewoods Chartered Surveyors, said: ‘The level of demand since the start of the year has been lower.

‘There is uncertainly within the market including Brexit, interest rates, as well as job security. Properties are generally overpriced, but stocks are low. Hence stalemate.’

For the first time since May 2013, the cost of a home in the South West has also started to fall, Rics said.

But, in Scotland and Northern Ireland, property prices are on the up. 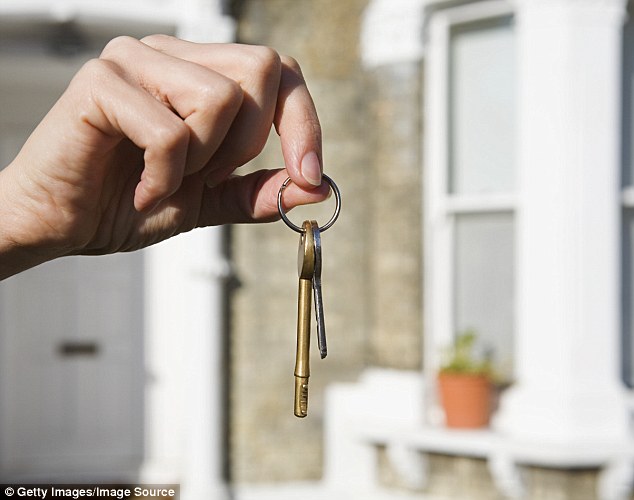 Capital problems: In London, over 60 per cent of respondents said they saw prices in the capital fall last month 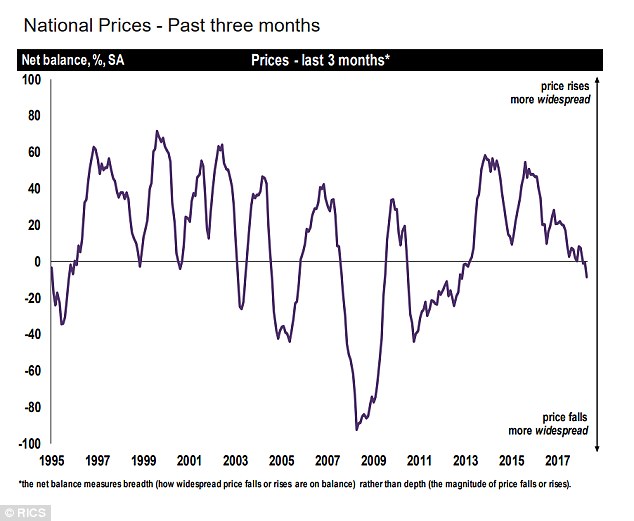 Data: Average national property price movements since 1995, according to RICS

Looking ahead, 31 per cent of respondents said they expect house prices to be higher in a year’s time, with the strongest growth predicted for Scotland and the North West.

With growth remaining sluggish in the capital, a sizable portion of experts in London are expecting prices to continue falling over the next year.

In terms of buyer demand and sales, both remained broadly stable last month, with sales figures in Scotland looking particularly strong for the year ahead.

Simon Rubinsohn, chief economist at Rics, said the UK’s housing market usually sees an upturn in activity at this time of year.

He added: ‘However, once this seasonal pattern has been allowed for the underlying trend in transactions still remains broadly flat.’

Just weeks ago, the UK’s markets were gearing up for a rise in interest rates by the Bank of England’s Monetary Policy Committee today, which would be good news for savers, but less welcome for mortgage holders.

Now, following a string of disappointing economic results across some of the country’s most important sectors, as well as falling inflation and calls for caution by the Bank’s governor Mark Carney, a rate rise is almost certainly off the cards. 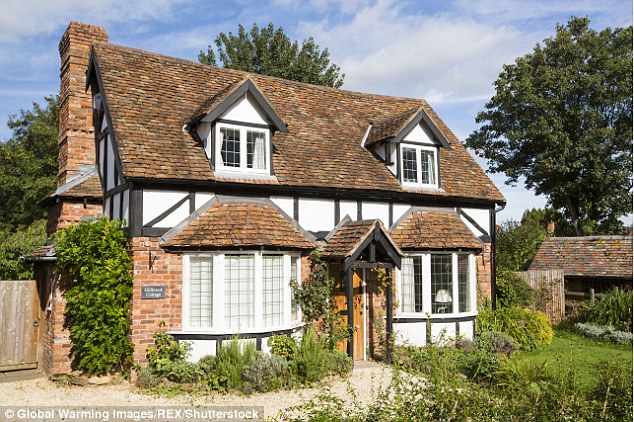 Predictions: Looking ahead, 31 per cent of respondents said they expect house prices to be higher in a year’s time

Brian Murphy, head of lending for Mortgage Advice Bureau, said: ‘Following on from reports earlier this week that the average house price had cooled last month, it’s not a huge surprise to find that the opinion amongst Rics members points to the market cooling last month.

‘This is not just in areas that were already seeing values recede, such as London and the South East, but in the South West which previously had seen significant increases.

‘It’s also interesting to note that the middle and upper levels of the market are seeing asking prices not being achieved in many areas, both in the super-prime multi-million league, but also in the £500,000 to million category.

‘This is, realistically, the cost of a family home in many areas of the South East and London.

‘This is potentially a combination of mortgage affordability and the cost of stamp duty in the “middle tier”, both of which are proving challenging for those wishing to move up the ladder. ‘

‘Elsewhere, the survey findings point to the fact that whilst buyer demand has remained consistent, the ongoing lack of available properties is still at near all-time record lows.

‘In practical terms, this translates into less buyer choice, and those who want to purchase taking longer to find what they are looking for.’