FCA chief asks… I don’t say this out of bloodlust, but NO ONE has been properly punished. Why?

Being chief executive of the Financial Conduct Authority, regulating 58,000 firms and protecting consumers from the latest scams and misdeeds, must be one of the toughest jobs in the UK.

Yet it probably feels almost an oasis of calm for Andrew Bailey compared with this time ten years ago, when he was one of a small band of men and women desperately battling to save Britain from the crisis created by the banks.

His role then was chief cashier at the Bank of England – his signature was on our banknotes – and he was at the heart of the efforts to save the financial system, which came close to a catastrophic failure that would have plunged the country into unimaginable chaos. 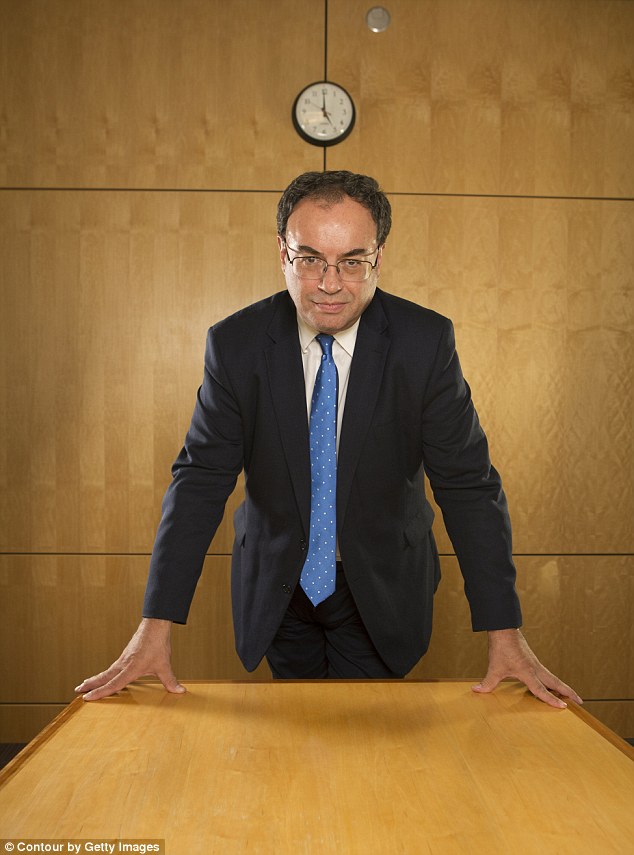 New role: Andrew Bailey was chief cashier at the Bank of England during the financial crisis

Perched in the FCA’s new offices in Stratford, East London, near the Olympic swimming pool, the 59-year-old muses on the fact that none of the senior bankers involved suffered any meaningful punishment.

‘It is a very difficult part of the story. I say that not out of bloodlust, but if you look at it from the point of view of the public, they say, ‘Well, you have this regulatory regime but it doesn’t deliver personal accountability,’ ‘ he says.

It certainly hasn’t. Fred Goodwin, the man who led RBS over the cliff, was relieved of his knighthood but suffered no other sanction. Andy Hornby, who was chief executive of HBOS, has gone on to make millions at subsequent jobs and is currently adding to his fortune with a senior post at betting firm GVC.

‘Fred is on a golf course somewhere getting his pension,’ says Bailey. Does that feel right? ‘No,’ he says. ‘The senior management of HBOS – to this day – they don’t accept responsibility.’

Would it be different now? ‘There is now personal accountability and responsibility so I hope the answer is yes,’ he says. ‘I met Goodwin a few times. He was openly contemptuous of regulation. He may have been an extreme case but he wasn’t unusual. Attitudes are very different today.’

As he says, though, the bosses of failed banks could have been punished under existing rules – but they weren’t.

‘In the wake of the failure of Barings Bank, the main people there were banned as directors. I don’t think anyone has been banned as a consequence of the financial crisis. I don’t know why not. I have never got an answer to that.’

Saving the financial system was a round-the-clock job in 2008. ‘It was gruelling. There were a lot of all-nighters. I didn’t have a weekend off for at least two months.’

There were, he points out, no tried and tested procedures to deal with a crisis of that magnitude – so he and his colleagues were obliged to invent solutions on the hoof.

‘We were making it up as we went along, in the best sense. You never knew what would happen next, apart from it wasn’t going to be good,’ he says. ‘I remember John Cummins, the treasurer of RBS, coming to see me. He looked like death and said, ‘We can’t survive the day. Can you get us £25 billion without anyone knowing?’ I said: ‘Yeah, we can do that.’

‘I knew we could because we had done it for HBOS the week before,’ he laughs. ‘This was the sort of thing we did in those days.’ Bailey went to Wyggeston Grammar School in Leicester, where he has to concede the laurel for most famous Old Boy to Sir David Attenborough. He then went on to Queen’s College, Cambridge.

Friends say he was influenced by his headmaster father, who instilled in him a strong sense of right and wrong. A no-nonsense character, he has a reputation for being unflappable in a crisis and unafraid to speak his mind.

One tale about him is that he helped his wife, the American political scientist Cheryl Schonhardt-Bailey, fend off a bear at their holiday home in Idaho, while simultaneously working on the rescue of Northern Rock. The truth is slightly less dramatic: he was on the phone to her from the UK and she saw off the Bruin herself.

He insists the banks are a lot safer now than in the run-up to the crisis. ‘What we learned ten years ago was how little capital they had, how little loss absorbency they had and how poorly they understood some of the risks they had on their balance sheets.’

Were the Bank of England and the other regulators to blame? ‘This was the era of light touch regulation. The degree of scrutiny of balance sheets wasn’t there really. There was a kind of complacency.’ He adds that the Bank’s role in maintaining financial stability was somewhat sidelined under the governorship of Mervyn, now Lord, King. ‘Financial stability was not the place to work in the bank if you wanted to make a name with Mervyn. It got downgraded in a way, so we arrived at 2008 badly prepared.’

Before the FCA, Bailey spent his entire career at the Bank and has navigated the snakes and ladders of that notoriously political institution with aplomb, so he is now a leading candidate to be the next governor when Mark Carney leaves next year.

Bankers who cross him are given short shrift. Jes Staley, the boss of Barclays who was recently fined for trying to expose a whistle-blower, is a recent target. Bailey described Staley’s behaviour as ‘negligent, stupid and grossly wrong’ to MPs. ‘I was at the Treasury Select Committee a few weeks ago and the Staley case came up.

Someone asked a really good question: why was a guy who cheated on his train fares banned from the industry, but not Staley? It allowed me to explain the difference between stupidity and dishonesty. The train fare man was deliberately dishonest for years. Staley was stupid but not dishonest.’

Bailey himself has been under fire for deciding not to take action against Royal Bank of Scotland for its mistreatment of small firms. He believes there should have been public inquiries into behaviour at RBS and Lloyds, though ‘it is a bit late now’.

He supports The Mail on Sunday’s campaign for a tribunal or beefed-up ombudsman to resolve small firms’ disputes with their banks.

In the recession, he said, the number of firms going into the banks’ rescue units ‘just ballooned’ and lenders ‘lost control of their ability to manage cases. There was a degree of machismo in how they were handling borrowers.’

Another legacy of the crisis is that young people have lost out due to low interest rates and Quantitative Easing, when the Bank pumped billions of pounds into the system to stimulate the economy.

‘There have been big intergenerational effects. It has benefited older people who already owned housing and financial assets. But younger generations are more indebted.’

The ‘Goldilocks’ level of interest rates that will make sure the economy doesn’t get either too hot or too cold in the longer term is significantly lower than in the past, Bailey believes.

‘Rates will go up somewhat but they will be lower relative to history. Real rates at 2 to 2.5 per cent, that is a good place to be.’

‘Are households and businesses prepared for a gradual increase in rates? Well, probably yes.’

The system may be safer now but there are plenty of challenges including Brexit. ‘There is a lack of clarity at the moment,’ he says.

He doesn’t fear a repeat of the financial crisis, but concedes there could be one of a different variety. In the past ten years, he says, the risks have shifted from reckless behaviour by bankers to cyber-fraud and IT risks. ‘We are much better placed to cope today – unless it is a completely different kind of crisis,’ he says.