The supply of vital vaccines could be at risk in a hard Brexit, the head of one of the UK’s leading healthcare research bodies has warned.

Steve Bates, chief executive of the British BioIndustry Association, said ‘there is no legal certainty about the future regulation of vaccines and medicines in a hard Brexit.’

‘The worst case scenario is that vaccines may not be available,’ he said. 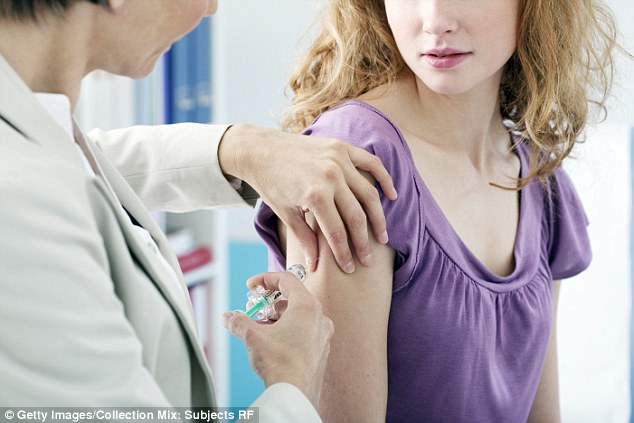 Threat: A hard Brexit could lead to a shortage of vaccines, claims the British BioIndustry Association

There are already concerns that pharmaceutical companies based here such as GlaxoSmithKline and AstraZeneca may scale back on research in the U.K. and cut jobs here post Brexit. The availability of medicines and vaccines is an additional worry, industry sources say.

Most jabs, including those for childhood illnesses and the potentially life-saving anti-HPV injections that protect against cervical and throat cancers, are imported from overseas including from EU countries.

More than 650,000 babies were vaccinated in the UK in the last year and over a lifetime people typically have around twenty jabs to protect them against a host of diseases including diphtheria, whooping cough and measles.

However, virtually the only major vaccines produced in the UK are the seasonal flu jab and the anthrax vaccine.

At present, vaccines produced in the EU are authorised by the European Medicines Agency (EMA) for use in Britain, but it is not certain whether the UK will remain a member after Brexit.

The headquarters of the EMA, which is currently in London, is relocating to Amsterdam next year.

The UK government and leading drugs companies want Britain to remain part of the EMA, but Bates said it is not clear whether that goal can be achieved.

‘We are working very hard and we believe the government’s position is for close regulatory co-operation, but time is running short.’

He added that if the UK is no longer part of the EMA, we would have to set up new testing laboratories and a whole new bureaucracy of our own.

‘Vaccines are a regulated product which, by and large, we import. They face the same issues as any other products under Brexit, that is delays at customs and tariffs, and additional issues because they are licensed products policed by the EMA.

If we are no longer part of that regime, there are questions on what are the rules.’

MPs are this week debating amendments put forward by the Lords to the legislation covering the UK’s exit from the EU. These include one seeking to ensure that Britain can remain a member of agencies such as the EMA after Brexit.