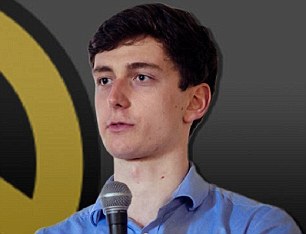 Tom Dupre, 23, has been dismissed by Standard Chartered

A banker has been fired after he was outed as co-leader of an extremist anti-immigration group.

Tom Dupre, 23, has been dismissed by Standard Chartered over potential damage to its reputation.

His role with Generation Identity was flagged up by campaigners Hope not Hate.

Dupre’s involvement was exposed last weekend in a newspaper.

The clarinet player who studied at Bristol University and went to school in Kent, said he did not think the mayor of London, Sadiq Khan, is European.

The bank yesterday said: ‘We can confirm Tom Dupre no longer works at Standard Chartered.’