Fast Ford fans – this is a car that will set your pulses racing. But it also might make you shudder when you see the estimated selling fee.

The motor that’s up for grabs is the hugely collectible Ford Sierra Cosworth RS500, of which just 499 were ever built.

And this example, registered in 1987, is more special than arguably any other. That’s because it’s chassis number 001. The original. The one that set the tone for one of the most desirable performance cars of the 1980s.

For that reason alone, experts predict it will set a new record as the most expensive Sierra Cossie ever sold with a predicted price that could surpass £120,000. 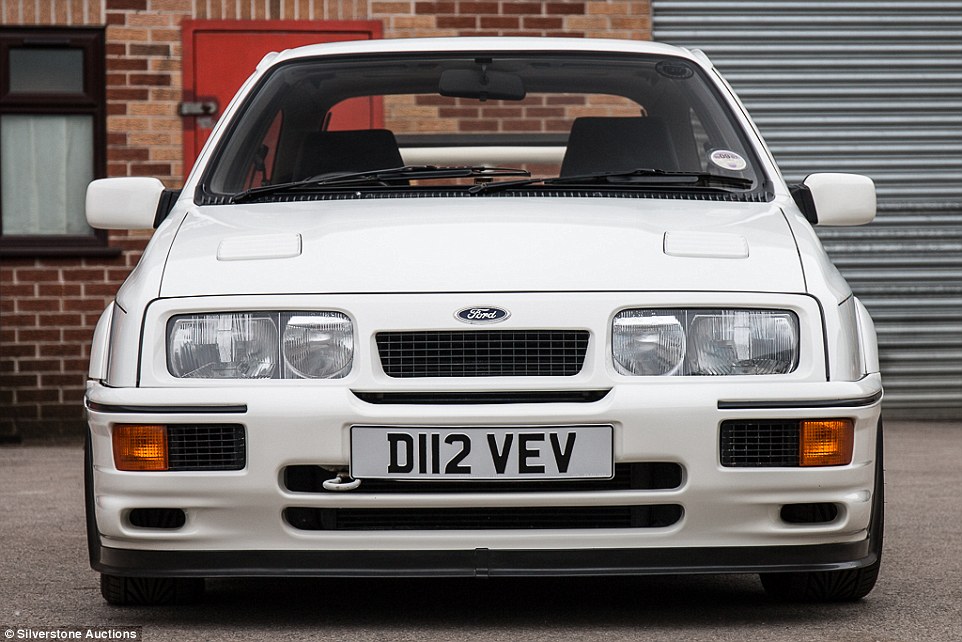 Fast Ford heaven: This car has been described as the ‘Holy Grail’ of all fast Fords – it’s chassis number 001, the first ever example of the hugely desirable Sierra Cosworth RS500

The Sierra Cosworth RS500 is fondly remember as the hottest of all fast Fords.

In recent years the demand for them has sky-rocketed, with auction figures reaching astronomical heights as the fight for the ones that have avoided the scrapheap has intensified.

The record currently sits at £114,750 for an example that changed hands last year – but Silverstone Auctions reckons this one will obliterate that figure.

That’s because it’s the first of the limited run of 499 Sierra Cosworth RS500s to come off the specialist production line at the factory in Tickford.

It will be offered to the highest bidder on 19 May at a sale held at Silverstone circuit.

Chassis 001 has been rubber-stamped as the original Sierra Cosworth RS500 by Paul Linfoot, an expert in models with the blue oval badge who gave the thumbs up to its authenticity. 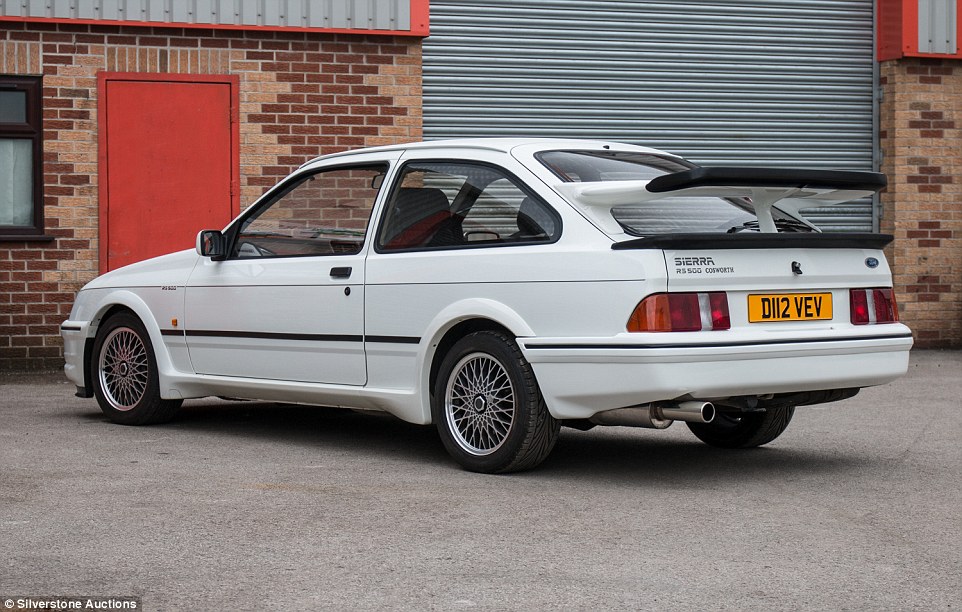 It will be sold by Silverstone Auctions on 19 May for a what is expected to be a world record fee for Sierra. It will need to eclipse the £114,750 paid for one last year 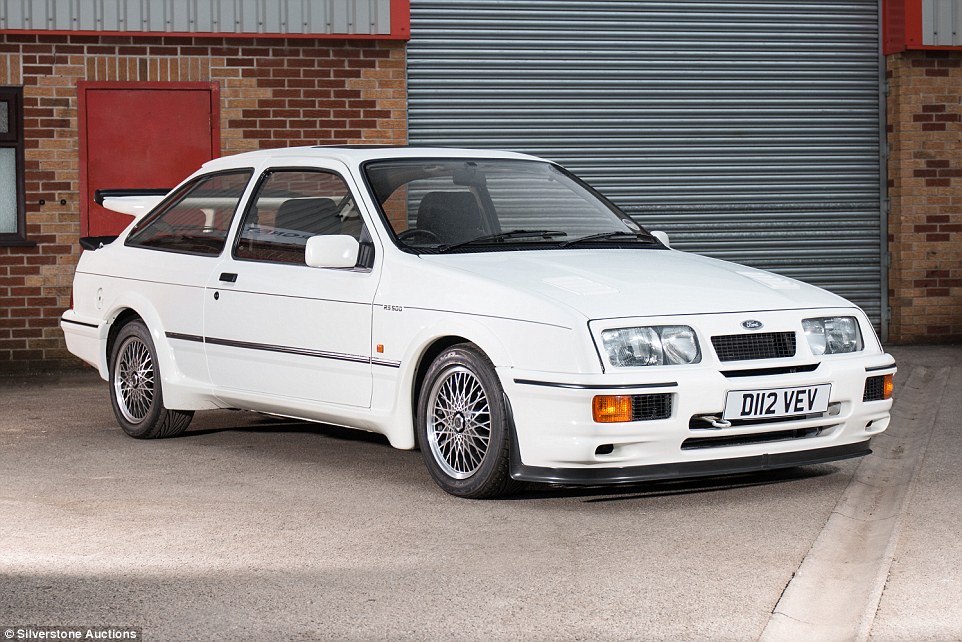 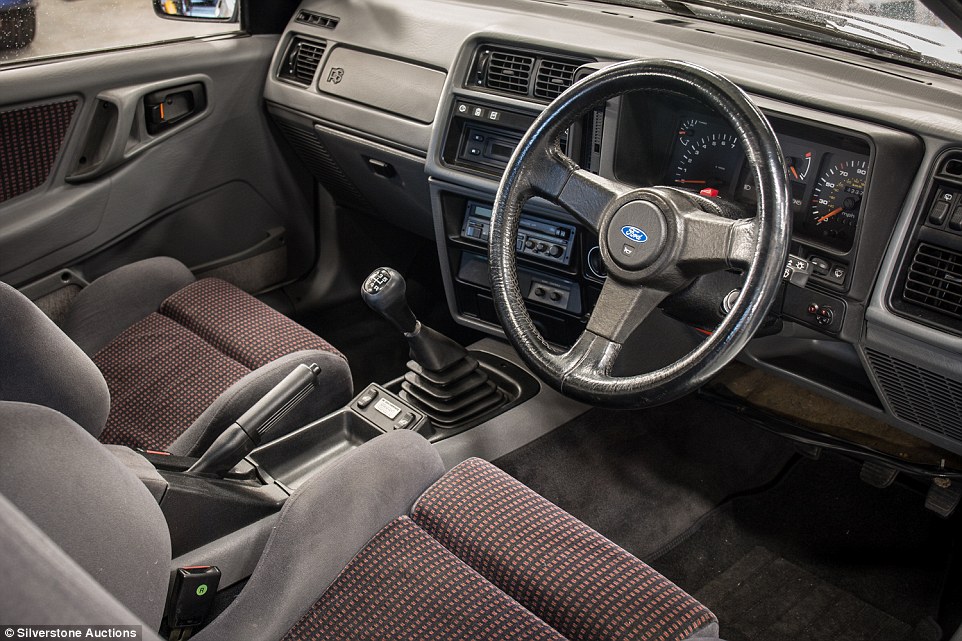 Linfoot confirmed that it’s the first of four pre-production models and described it as the ‘Holy Grail’ of all Fast Fords.

That’s no small sum for a 1980s family hatchback and is six times its original asking price of £20,000 three decades ago.

The simple fact that it is car number one will almost certainly see it eclipse all prices paid for one of the ’80s icons until now, said Nick Whale, managing director of Silverstone Auctions.

‘It’s chassis number one, the first Sierra Cosworth RS500 ever built,’ he commented.

‘This car is truly a one-off, and for any serious Ford collector, this must be the car to have – the one that started it all.’ 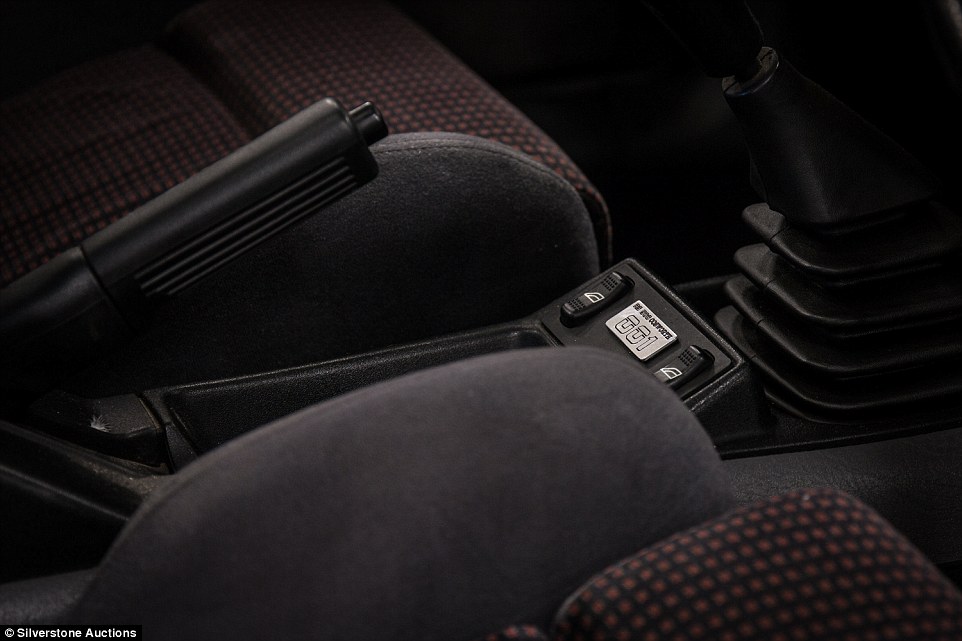 The plaque in the centre console of the car confirms that it is chassis 001. A Ford specialist was also brought in to confirm the authenticity of the vehicle 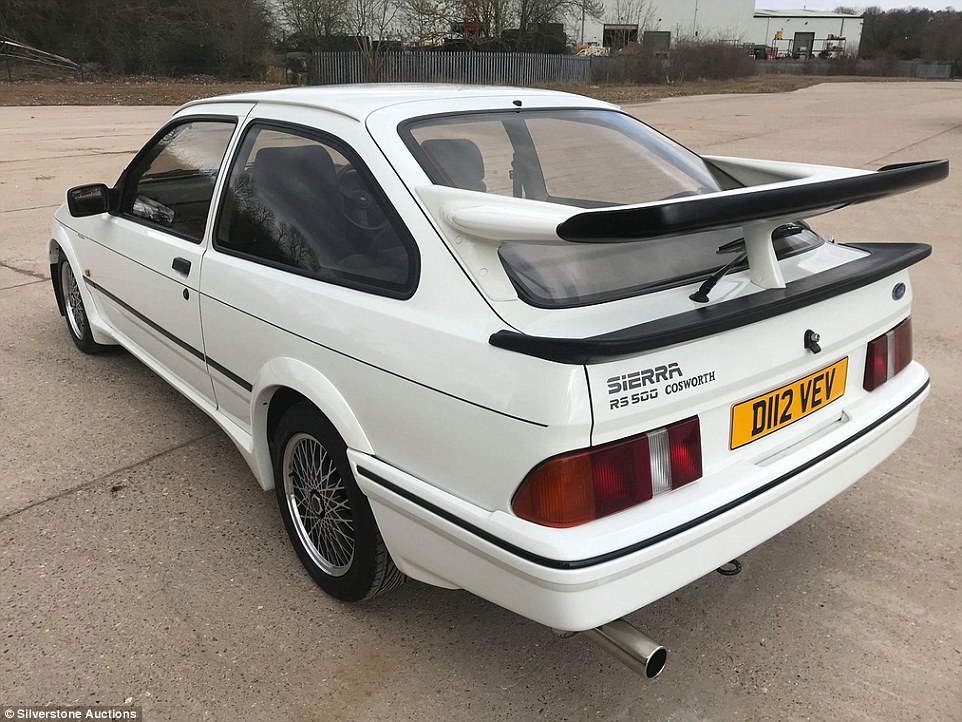 Ford Sierra Cosworth RS500: What is it? 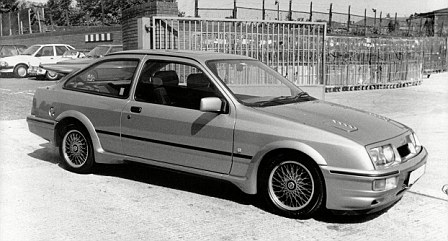 The Ford Sierra Cosworth RS500 uses a specially-built 2.0-litre turbocharged Cosworth engine producing 224bhp – which could be upped to 400bhp when modified for competition.

The car maker needed to produce at least 500 examples for road and race use in order to qualify to run in Touring Car series’ and other championships that used road-going models.

These cars featured numerous aerodynamic enhancements that have since become a thing of legend among collectors.

That includes the 30mm lip spoiler applied to the tailgate to increase downforce, sweeping front splitter, and larger cooling ducts for both the brakes and the engine intercooler.

The cars were exclusively available through 90 nominated RS specialist dealers and went on sale in Britain on August 1st, 1987 at a price of £19,950.

Linfoot, who inspected the car before the sale, said this car is like no other because chassis number one was the original test vehicle, driven by Ford to understand all aspects of the special components it had fitted before the final sign-off could be agreed.

That means it had a fairly hard life in its early days.

This car is truly a one-off, and for any serious Ford collector, this must be the car to have – the one that started it all

As with most prototypes, it was driven to the limit by the test team, and as a consequence had to be ‘re-shelled’ by Ford.

That didn’t stop them selling their test car to a customer, though, with it being handed to its first owner in March 1987.

In the next 20 years it had no less than five more custodians in the UK before being exported to Norway in October 2007.

That’s where it stayed for the next decade until February of this year when it was purchased by the current owner.

Despite being ragged by Ford’s testing department and changing hands no less than seven times in its lifetime, the unique RS500 parts are all still present and correct.

The RS500 pinstripe and commemorative 500 badges – which are always looked for by collectors – are also present. 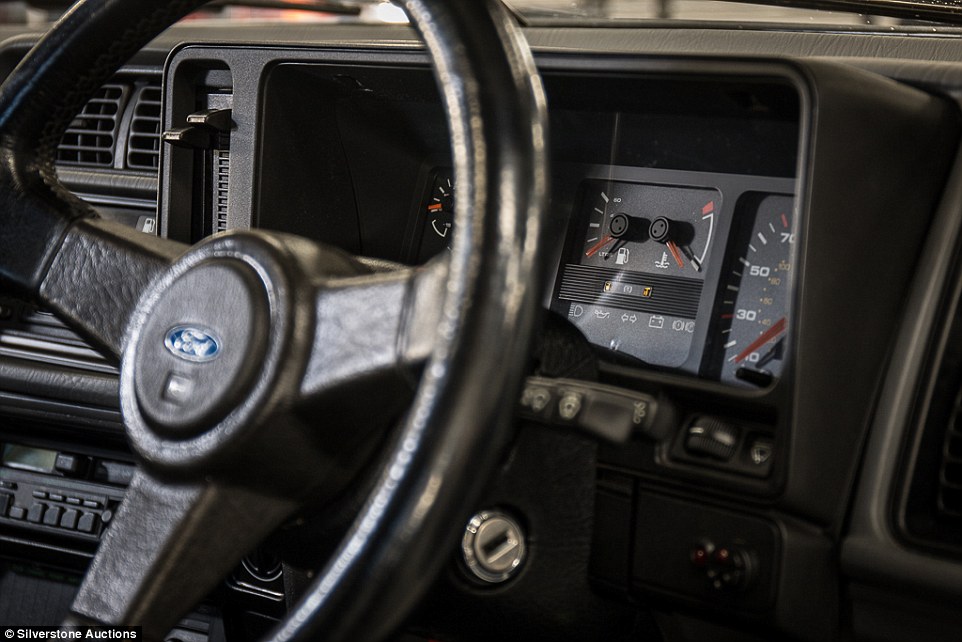 The car has had 8 owners in total. It spent a decade in Norway before being tracked down and bought by a collectible-car hunter in February this year 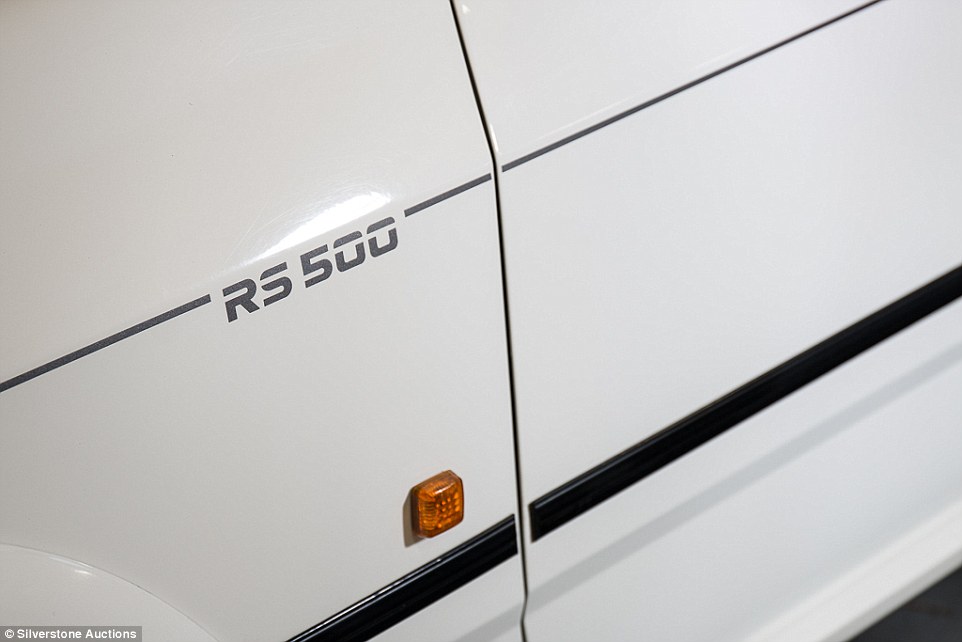 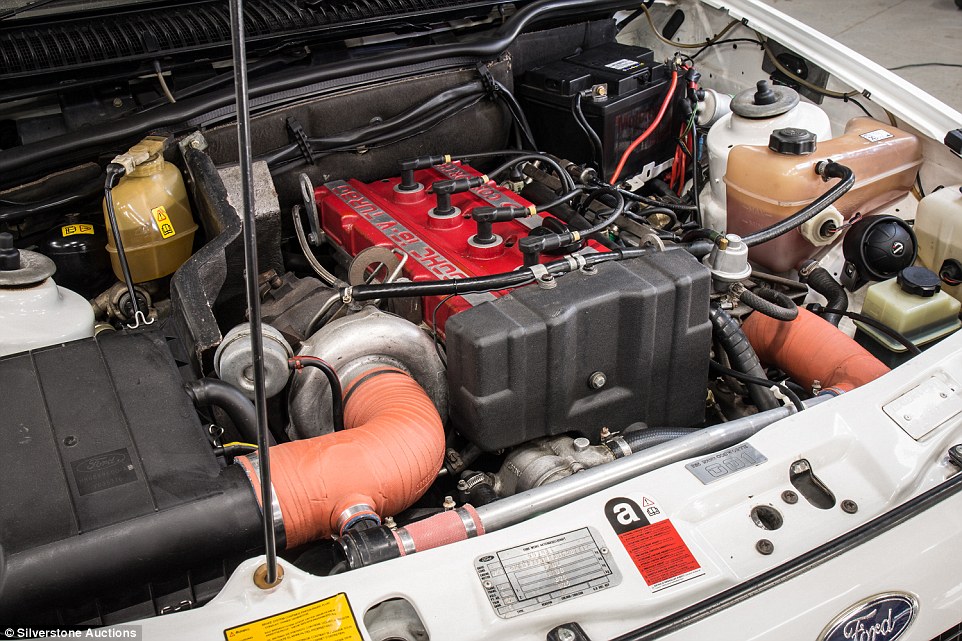 The Ford Sierra Cosworth RS500 uses a specially-built 2.0-litre turbocharged Cosworth engine producing 224bhp – which could be upped to 400bhp when modified for competition

The only aspects of the car that have been replaced are the top section of the dashboard and the exhaust, the latter of which has made way for a high-performance stainless steel Magnex system.

Nick Whale said the chances of it setting a new record are very strong, especially as it’s the first time he can recall a pre-production prototype being offered on the market since Fast Fords became popular among the most passionate car collectors as the ’80s car to have in their garage.

‘Recently we have seen a growing interest in fast Fords, and the prices have risen to record-busting levels,’ he added.

‘I can’t recall there ever being a Ford prototype coming to auction, and I can’t see this happening again.

‘This is a very special and rare RS500 that presents very well and is a car that can be driven, enjoyed and is a great addition to any collection.’

The unqiue Ford Sierra Cosworth RS500 will be sold with a comprehensive history file which includes a number of old MOTs, some early tax discs and the usual registration and ownership information, as well as the report by Paul Linfoot.

It’s not without a blemish on its record, though.

Silverstone Auctions said it appears to have suffered accident damage in 1988. However, the alert on the Condition Register was subsequently removed. Something you might want to think about before raising your paddle in a few days. 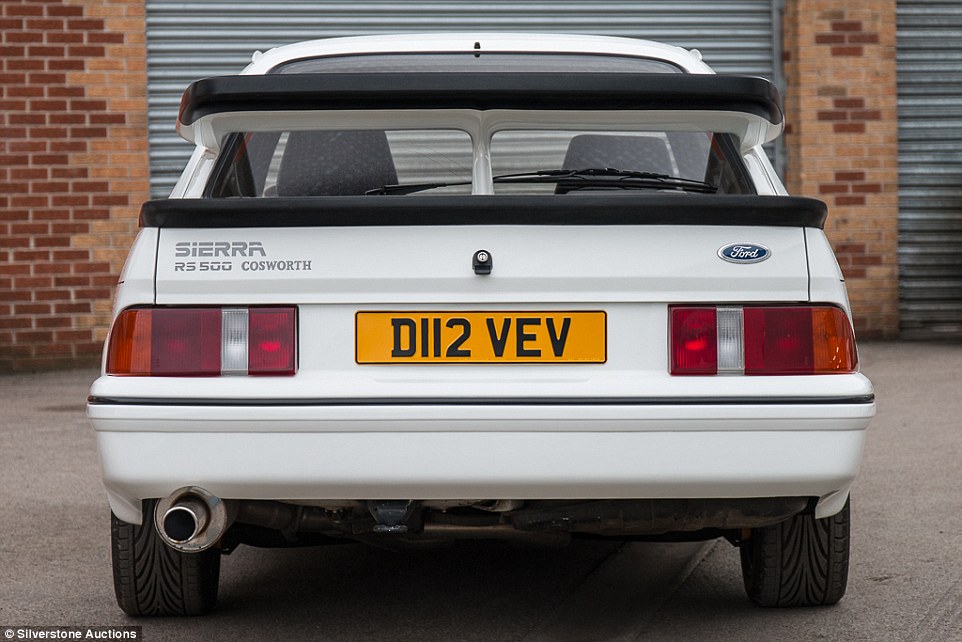 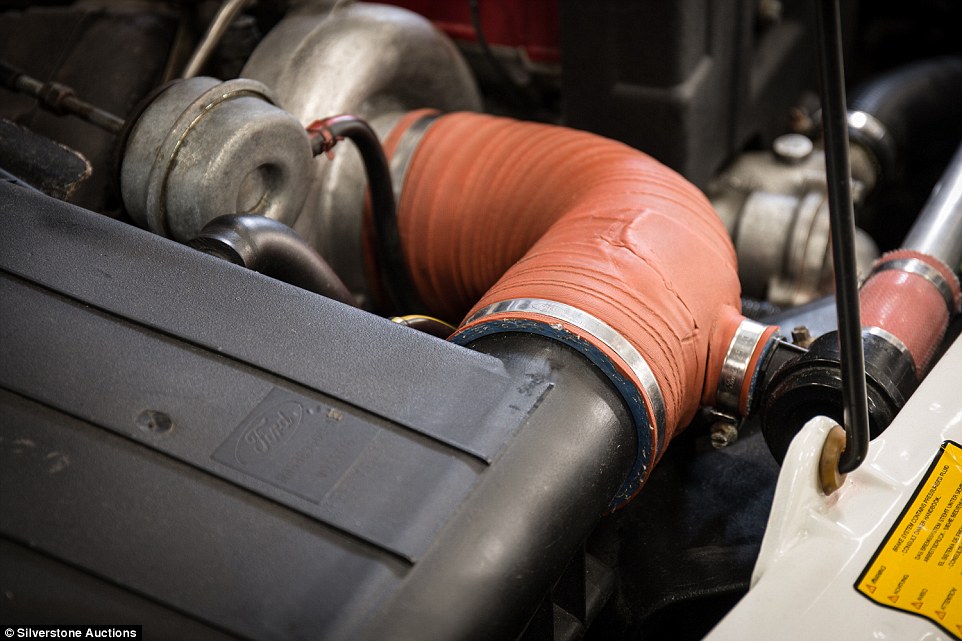 The cars were exclusively available through 90 nominated RS specialist dealers and went on sale in Britain on August 1st, 1987 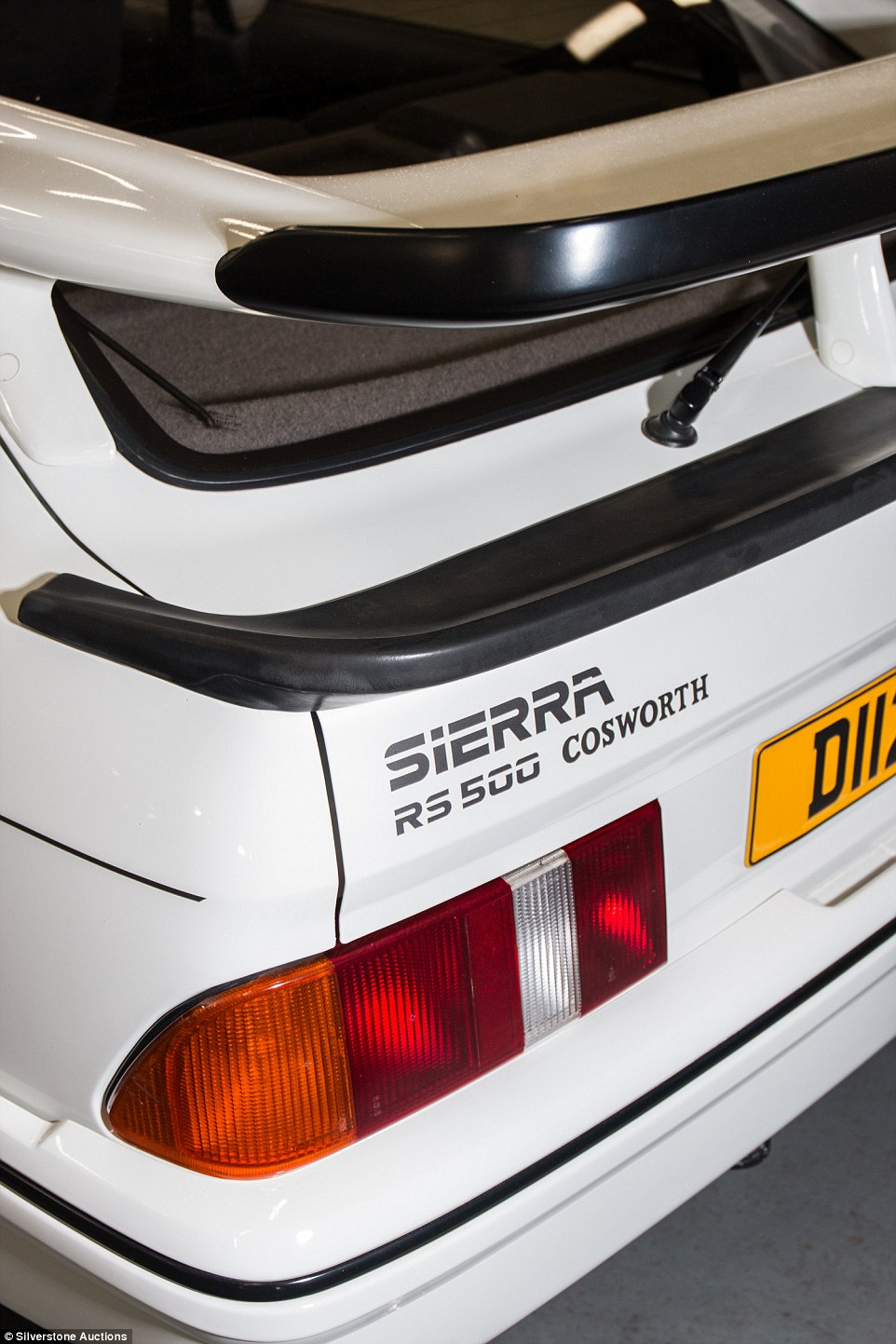