Follow our six-step home loan health check for savings and it could cut your bills by over £3,000 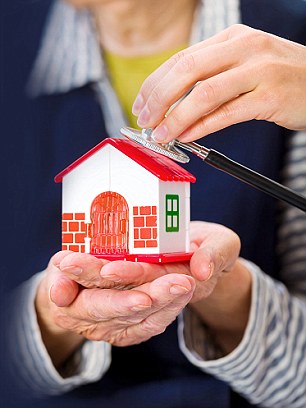 Although there is no certainty that a rise in Base Rate will come before the summer is out, there is little doubt that mortgage rates will not get any lower.

At a time of heightened economic uncertainty, JEFF PRESTRIDGE looks at the steps that can be taken to control what is for many people their biggest household expense.

Low interest rates, which have prevailed for the past ten years, breed complacency among many homeowners. This results in some people paying more for their home loan than they need to.

David Hollingworth is a director of mortgage broker London & Country. He says: ‘If you are worried about rising mortgage costs after a Base Rate rise, then you should be questioning whether you are paying too much already.

‘If you have not shopped around for a home loan for some time then there is a danger that you might have slipped on to your lender’s standard variable rate, a mortgage interest rate way higher than the best deals available.’

Many homeowners end up on a standard variable rate because a special deal they were on, such as a fixed or discounted rate, has come to an end and they have just not looked to move on to a new deal. These rates can be as high as 5.5per cent, especially among some of the smaller lenders such as local building societies. 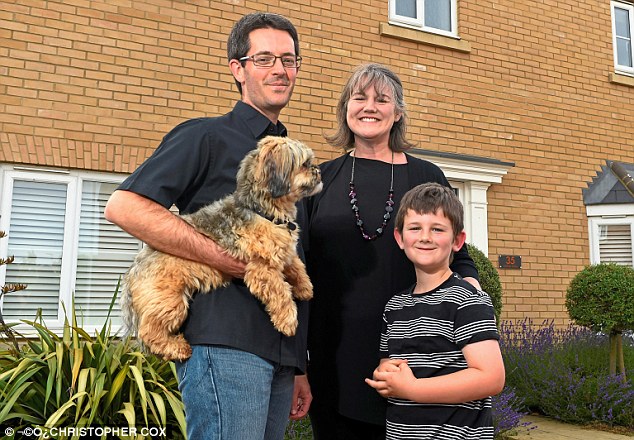 Low rate: Daniel and Elizabeth Jeans, with son Samuel, have locked in to a five-year deal

By remortgaging to a two-year fixed rate loan priced at 1.5 per cent, the monthly cost would fall to £599, a saving of more than £255.

Hollingworth adds: ‘The savings as a result of moving away from a standard variable rate loan – and on to a fixed rate loan – would provide a buffer against any increase in both interest rates and living costs.’

CASE STUDY: We knocked £500 off our monthly costs

Daniel and Elizabeth Jeans are cutting their monthly mortgage costs by some £500 as a result of remortgaging from Santander to HSBC.

The couple, who live in Blunham, near Bedford, have secured a five-year fixed rate loan priced at 1.74 per cent on their four-bedroom detached home. They were able to secure such a keen price because they have some 40 per cent of equity in their home.

The loan, arranged on a 25-year repayment basis, will kick in this month as their current deal, another five-year fix priced at 4.49 per cent, comes to an end.

‘I enjoy getting a deal,’ says 38-year-old Daniel who is an IT consultant.

Elizabeth, aged 40, also works in IT for a travel company. Daniel adds: ‘All I can see is interest rates going up so the opportunity to lock in to a rate of 1.74 per cent was one we could not afford to miss.’ The loan cost £999 to arrange with no valuation or legal fees.

The couple, who have a seven-year-old son, Samuel, plan to use most of their £500-a-month savings to overpay on their HSBC loan.

The remortgage was arranged through broker London & Country.

LOOK OUT FOR PENALTIES

Not everyone with a home loan will be able to remortgage to a cheaper deal without incurring a penalty from their existing lender.

Although early redemption penalties are rare with standard variable rate loans, you must find out if they are levied by your existing lender before you go down the remortgage path. Such penalties are more common with fixed rate loans.

These charges are a deterrent to remortgaging. Ray Boulger is senior mortgage technical manager at broker John Charcol. He says: ‘It is unlikely to be worth paying such a charge to switch to a new deal but if in doubt speak to an independent mortgage broker who can advise.’

But you do not have to wait until such charges expire before taking action. For borrowers whose existing loan deal is drawing to an end, it can pay to start the hunt for a new mortgage early.

This is because most lenders are prepared to keep mortgage offers open for three to six months. So, you could get a new loan agreed now – before any Base Rate hike – which would kick in to coincide with the end of your existing deal. This would ensure you do not end up temporarily on a standard variable rate loan.

In shopping around, you do not have to remortgage to a new lender. Your existing lender should offer you a range of deals to persuade you to stay. They may not be the best value in the market but they will be less hassle to arrange.

Given any future movements in Base Rate are likely to be up rather than down, opting for a fixed rate loan makes the most sense.

Boulger says: ‘A good way to look at a fixed interest rate is as an insurance policy against rates rising. Even if Base Rate rises during the fixed period, homeowners have the comfort and benefit of a guaranteed mortgage rate and the ease that brings to household budgeting.’ 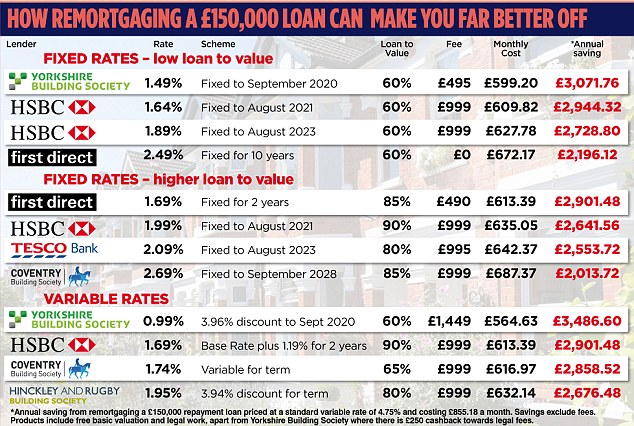 Boulger says borrowers should not fix beyond the period they are realistically looking to stay in their existing property. Also, with the fixed costs associated with remortgaging – application, legal and valuation fees – a longer fix (five years) is a smarter move than a short-term one (two years). Hollingworth says: ‘We are seeing more borrowers opt for the medium term security of a five-year fixed rate.’ 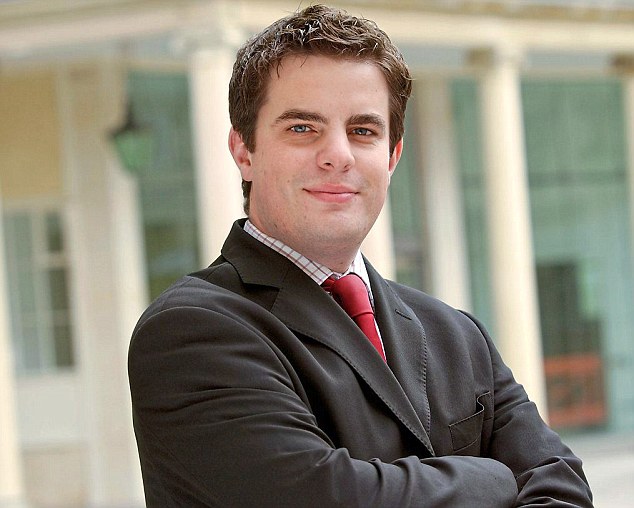 ‘Shop around’: London & Country’s David Hollingworth says: ‘If you are worried about rising mortgage costs after a Base Rate rise, then you should be questioning whether you are paying too much already’

Ten-year fixed rate loans are an option for those with a lot of equity in their home – and who are not looking to move in the foreseeable future. Although the rate may be higher than a five-year fix, it could be a reasonable trade-off for the extra five years of interest rate security. Some ten-year fixed rate providers, such as Coventry Building Society, only apply early redemption penalties in the first five years, thereby allowing borrowers to move penalty-free thereafter.

Such long-term deals are not a good idea for those who have little equity – 10 per cent for example – in their home. They are better off opting for a shorter term fix and then remortgaging to take advantage of the fact their loan repayments will have reduced the loan to value, enabling them to access improved rates.

Fees are a key consideration and need to be factored into the mathematics. Loans with low or no arrangement fees – plus a free valuation and free basic legal work – are best suited for those with small loans to remortgage. For example, someone remortgaging a £100,000 25-year loan on to a two-year fix would opt for Yorkshire Building Society’s 1.49 per cent deal on rate alone. But the equivalent 1.94 per cent two-year fix from Nationwide Building Society would work out cheaper. This is because of lower remortgagecosts.

So, over two years, Yorkshire’s fix would cost £10,132 compared to £9,902 if the Nationwide was taken. But if the remortgage was for £250,000, Yorkshire’s fix ends up £543 cheaper over the two years – £24,513 compared to £25,056 from Nationwide. This is because the higher fixed costs related to the Yorkshire deal are more than offset by the lower mortgage payments.

Discounted rate loans may appeal to some people on both cost and flexibility grounds. Such rates are keenly priced and often cheaper than those available on many fixed rate loans. Also, early redemption penalties are not as prevalent, making these loans attractive to homeowners who are planning to move in the near future. Of course, such loans provide no protection against any future Base Rate rises.

With savings rates at rock bottom, homeowners might be better employing any surplus household income – or freed-up income as a result of remortgaging – to overpaying the mortgage. This will result in the loan shrinking more quickly and it being repaid earlier than originally anticipated. It will also result in a smaller loan to remortgage in the future – maybe at a time of higher interest rates.

Taking a £150,000, 25-year repayment mortgage at two per cent, the monthly cost would be just over £635. Overpaying by £50 a month would result in the loan being repaid two years and two months early. Hollingworth warns: ‘It is important to realise that your loan gives you the flexibility to overpay. Most lenders now offer penalty free overpayments from the word go, typically up to 10 per cent of the outstanding balance per annum.’

Although your existing lender is the best starting point in terms of looking for a cheaper loan, the biggest savings will be made by using a broker who will shop around the market in search of the best deal.

Independent, whole of market, brokers include John Charcol and London & Country. There is also a new breed of online broker that includes the likes of Habito and Trussle.