An undisguised photograph of Ford’s new fourth-generation Focus family car has been leaked ahead of its official global launch in London tomorrow.

Ford bosses have confirmed that the new Focus will be officially revealed at a gala event on Tuesday April 10 and have released a ‘teaser’ video showing key elements of the car.

It comes 20 years after the first Focus was launched to become one of Britain and the world’s best-selling cars with nearly 2million UK customers so far. 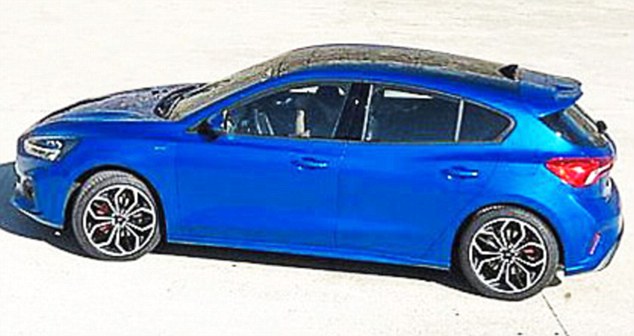 Driving force: A photograph of the undisguised new Ford Focus leaked out ahead of the car’s official global launch in London on Tuesday

The leaked photograph of the undisguised Focus appeared first on a Hungarian website and seems to show the car being photographed on a location photo-shoot in Portugal.

The company has released earlier official images of the Focus in disguise with the social media tag #TimeToFocus.

There is also intense speculation that a petrol-electric hybrid hot-hatch ‘RS’ version of the new Focus will be launched in 2020. 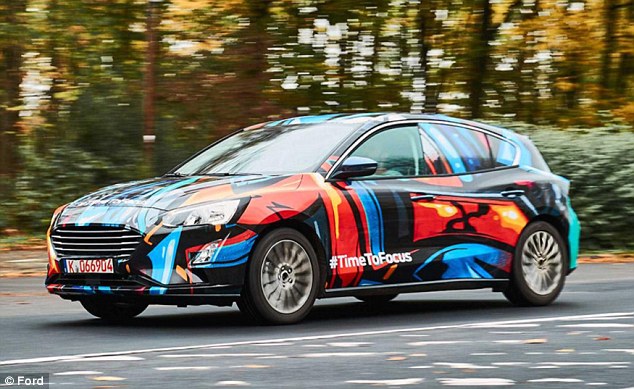 The first Focus was launched in 1998 as a successor to and replacement for the long-running Ford Escort. It was originally going to be called ‘Fusion’ but that name leaked out.

The Ford chief executive Jacques Nasser was so incensed that he changed the name to ‘Focus’ and only revealed the name as the covers came off the car at a launch dinner at the Geneva Motor Show. So intense was the secrecy that paper press releases were printed on site – with the name added only at the very last minute.

The new Focus heralded a bold new chapter for Ford with its then quite radical ‘New Edge’ design bringing some excitement to the family car sector. 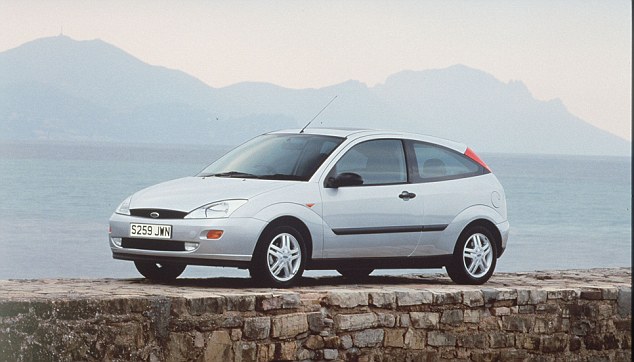 20th birthday: The first Focus, pictured, was launched in 1998

The car benefited from a woman’s touch. Project manager for the launch of the original Focus was engineer Rose Mary Farenden, based at the car firm’s engineering centre at Dunton in Essex, who graduated in mechanical engineering from Queen’s University Belfast.

Ford also subjected the design to various female ‘clinics’ to ensure that the vehicle was user-friendly and female-friendly – including door handles that didn’t break nails.

Focus became the best-selling vehicle nameplate in the world 2012 and 2013 and nearly 2million have been sold in total in the UK. The UK’s 1,500,000th Focus went to Essex cricketer Jaik Mickleburgh in 2012.

Last year Ford sold 70,000, making it the UK’s third-best-selling car after the Ford Fiesta and the Volkswagen Golf.

In trim level terms, Ford currently sells 27 per cent Zetec , 28 per cent ST-Line and 30 per cent in the upmarket Titanium.

Hundreds of thousands of young learner drivers have gained their first experience on the road in a Focus has been used as an AA Driving School car since 2011.

To mark the run out of the existing third generation Focus – and the 50th anniversary of first Escort – Ford is selling a final 50 ‘RS Heritage’ 375 horse-power editions in deep orange costing £39,895.