At least four restaurants are disappearing from the High Street every day as food chains battle to stay afloat.

Restaurant chains Jamie’s Italian, Prezzo, Byron and Strada have all been forced to announce closures over recent weeks with more considering restructuring.

Around 1,000 restaurants were closed in 2017, an increase of 20 per cent on a year earlier, according to government data.

At least 200 restaurants have been shut or marked for closure since the start of the year with no signs of pressure on the sector letting up. 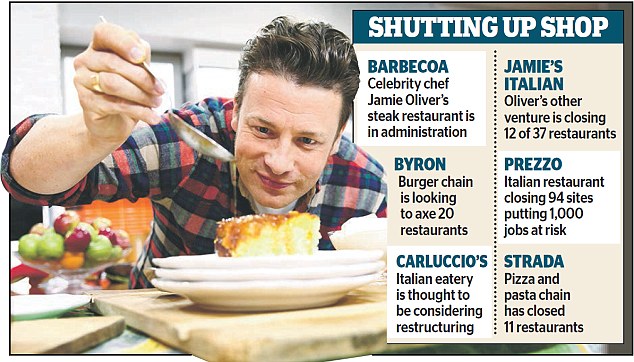 Pizza chain Prezzo is being forced to shut 94 restaurants, costing 1,000 jobs, while celebrity chef Jamie Oliver is closing 12 of his 37 Jamie’s Italian sites.

Burger chain Byron is expected to axe 20 of its stores and pasta restaurant Strada has already called time on 11 of its outlets.

The restaurant sector is dealing with a perfect storm of a rising minimum wage, tighter consumer spending and business rate hikes.

A group of restaurant bosses have written to Chancellor Philip Hammond ahead of Tuesday’s spring statement calling for an urgent reform of business rates.

It urged the Government to take action to avoid ‘damaging closures and job losses’.

The letter has been signed by 15 bosses including the chief executive of Bill’s and the chairman of pub chain Mitchells and Butlers.

It follows recent findings from accountant UHY Hacker Young that 35 of the UK’s top 100 restaurant groups are now loss-making – up 75 per cent since last year.

The restaurant sector’s woes have been further compounded by fierce competition from takeaway firms like Deliveroo and Just Eat which are taking advantage of people’s changing eating habits.

Domino’s Pizza sold a pizza every three seconds in the UK last year, as sales soared to exceed £1billion for the first time.

Chief executive David Wild said the rise of TV subscription services like Netflix and Amazon Prime was encouraging more people to save money by buying a bottle of wine at the supermarket and ordering a pizza at home.

Frankie & Benny’s owner The Restaurant Group is even trialling its own delivery service as it tries to cash in on the growing food delivery market.

But some restaurant chains are bucking the gloomy trend as they continue to lure hungry customers.

Asian-inspired Wagamama has just opened a flagship restaurant in Dubai and ethically sourced fast food chain Leon is preparing to expand into Europe and open an Asian spin-off in the UK later this year.

Sarah Humphreys, lead partner for casual dining at Deloitte, said the restaurants that were doing better were those with a more unique offering. ‘I wouldn’t be surprised if we see more restaurants struggling this year,’ she added.