The stuttering London housing market has pushed Foxtons into its first loss for a decade.

Revenues for the six months to June 30 at the estate agent dropped to £53million – down 9 per cent on a year earlier – as weak house sales took the shine off a more solid rental market.

It meant the firm lost £2.5million, down from a £3.8million profit. 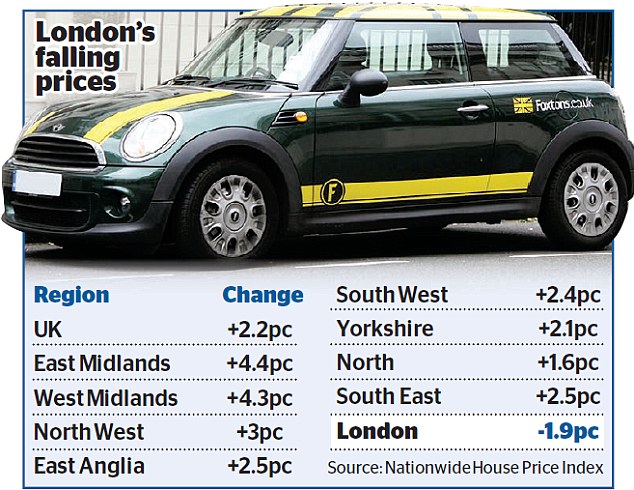 Slump: Foxton’s eevenues for the six months to June 30 at the estate agent dropped to £53m – down 9 per cent on a year earlier

Foxtons last lost money in the financial crisis when it was in private ownership.

House price growth has slowed across the UK in the past year but London has been hit particularly hard.

It was the only English region where average selling prices actually fell, dropping 1.9 per cent to £468,845 according to figures from Nationwide building society.

All but two of Foxtons’ 67 branches are in the capital, so it was hit particularly hard.

Chief executive Nic Budden said: ‘As expected the weak sales market impacted our performance in the first half of 2018.

‘After a slow start to the year, performance in our lettings business improved throughout the period delivering another consistent result for the first six months.

‘The property sales market in London is undergoing a sustained period of very low activity levels with longer and less visible transaction outcomes, which clearly impacts our business.’

Sales revenues dropped 23 per cent to £17.2million as a result of the slump, which follows years of blockbuster growth in property values.

Bosses are not holding out hope for a quick recovery.

A spokesman said that although the properties they have for up sale have increased and are at a similar level to last year’s figures, fewer homes are actually being sold.

Meanwhile, lettings revenue dropped 1 per cent to £31.7million. The average price paid by tenants was flat on a year earlier, figures revealed.

Traders, however, had feared its latest results would be even worse and bought into the stock, sending shares up 9.2 per cent, or 4.4p, to 52p.

The figures follow a tax raid on landlords which some experts have warned could push up prices.

Hikes to stamp duty on second homes and cuts to mortgage tax relief have triggered a sharp fall in available rental stock, the Royal Institution of Chartered Surveyors warned earlier this month.

It means there is more competition among tenants, so landlords still in the market can charge extra.

Landlords will face a fresh assault when the Government bans letting agents from charging fees to tenants, meaning the costs will have to be paid instead by the property’s owner.

Foxtons expects this to happen in 2019 and said it is exploring ways to limit the impact of the rules.