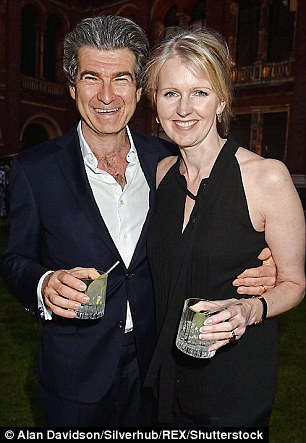 Toasting success: Black and Cash will pocket £24m at the float

Friends of former prime minister David Cameron will cash in from the £145m float of a behavioural science firm.

Old Etonian Octavius Black and his wife, Joanne Cash, who was dubbed a Tatler Tory during Cameron’s time in government, are set to make a combined £24m when Mind Gym makes its debut on the London Stock Exchange this week.

The couple, who founded the firm with psychologist Sebastian Bailey 18 years ago, will be handed 146p per share.

Black, who went to Eton with Cameron, is chief executive while Cash is chairman.

The firm claims it can use psychological techniques to help companies change their culture. It has worked with several blue-chip clients, including Glaxosmithkline and Unilever. Black said yesterday: ‘Today behavioural science comes of age.

‘When we started out 18 years ago at my kitchen table, it was readily dismissed. Now, the way businesses use behavioural science determines their success.

Black, 50, and his wife had close ties to Cameron and his inner circle when the latter was leader of the Conservative Party. At their wedding, Environment Secretary Michael Gove delivered the main speech.

The multi-millionaire businessman is the son of Lady Moorea Hastings, a relative of racehorse trainer the Earl of Huntingdon.

Oxford-educated Cash was one of the glamorous so-called ‘Tory totty’ candidates named by society magazine Tatler ahead of the 2010 general election.

She is a successful barrister who has represented celebrity clients such as Sting’s wife Trudie Styler and Australian model Elle Macpherson. The 48-year-old ran unsuccessfully for the Regent’s Park and Kensington North seat, losing to Labour’s Karen Buck.

The couple, who have a daughter, live in Notting Hill, the West London spiritual home of the Conservative Party under Cameron.

The area is also home to George Osborne, the former Chancellor, and long-time Cameron ally Ed Vaizey, both members of the so-called Notting Hill Set.

Mind Gym’s float is raising £50.8m overall, with Black, Cash and Bailey retaining 64.6 per cent of the stock. About 35m shares will be freely traded on the market from Thursday.

Mind Gym said it had a network of 293 coaches in 29 countries, who offer 90-minute lessons in person or using online video. It reported sales of £37m in the year to March 31 and profits of £7.9m.

Cash raised from the initial public offering will be used by Mind Gym to develop new online services for companies and to expand into more countries.