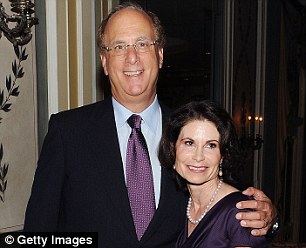 The boss of the world’s biggest fund manager was paid £19.5million last year, up nearly 10 per cent on the previous 12 months.

Larry Fink, who runs US investment giant Blackrock, topped up his £630,000 salary with a £7 million cash bonus and shares worth £11.9million.

The 65-year-old founded BlackRock in 1988 and turned it into the world’s biggest asset manager with £4.4trillion of savers’ cash.

Fink, a married father of three, is a vocal critic of corporate excess and has spoken out about the need for responsible capitalism. But his own huge pay packet has sparked accusations of hypocrisy.

‘Fink is up there with names like Jamie Dimon and Warren Buffett,’ Kyle Sanders, an analyst at Edward Jones & Co, said.

BlackRock saw investors pile record amounts of money into its funds last year, with assets under management up by 22 per cent. Revenues hit £8.7billion.