Furious Virgin Media customers have threatened to cancel their subscriptions after UKTV channels were wiped from four million boxes over a business dispute.

Ten free-to-air and paid-for channels were taken away, meaning fans of Dave and Gold, and shows Judge Romesh, Only Fools and Horses and Red Dwarf, were unable to watch their programmes.

Some customers declared they were cancelling their subscriptions, while others threatened to abandon the digital cable TV provider if the popular channels were not restored. 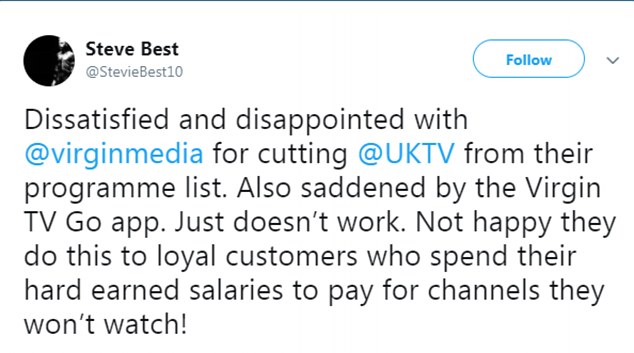 Some viewers declared they were cancelling their subscriptions, while others threatened to abandon the digital cable TV provider if the popular channels were not restored

Talks between the firms failed to solve an impasse over fees and the channels, including five which are free-to-air, disappeared from subscribers’ televisions at midnight on Saturday.

It leaves fans of shows including Taskmaster, Judge Romesh, Harrow and Red Dwarf unable to watch some of their favourite programmes as a result of the dispute.

One Twitter user said: ‘@virginmedia @UKTV Will be cancelling TV, broadband & all phones as soon as we can get through to someone at Virgin!! Think they might be busy with a lot of angry customers.’

Another said: ‘@virginmedia So this looks like the end, 15 years a customer and you’ve messed up big time. Sky shop Wednesday unless you fix it #SaveDave’. 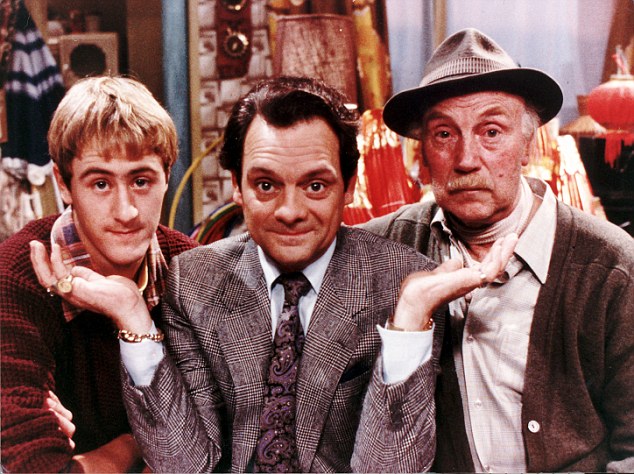 Virgin Media customers no longer have access to 10 UKTV channels, which air reruns of shows such as ‘Only Fools and Horses’ (pictured) 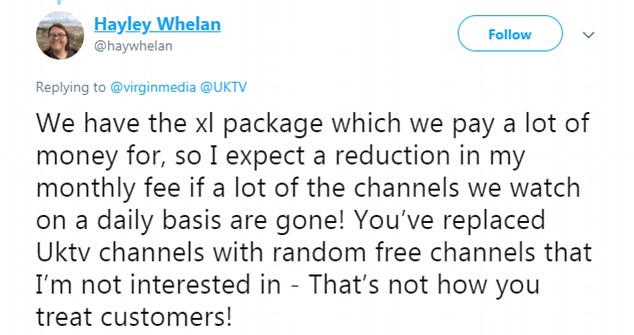 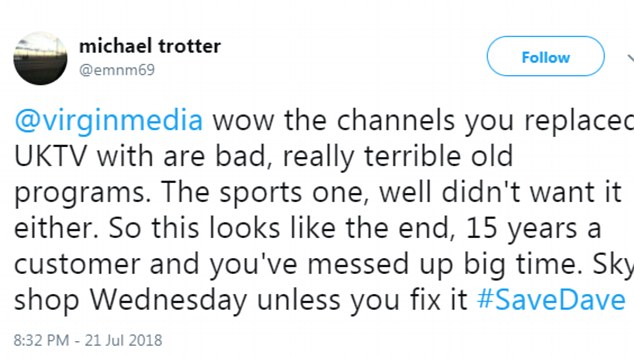 Virgin Media customers are no longer able to watch UKTV channels via the cable television service as a result of a business dispute.

Subscribers are also no longer able to access UKTV on-demand services via their Virgin Media sets.

But if you are a Virgin Media customer and a fan of programmes shown on UKTV channels such as Taskmaster, Judge Romesh, Harrow and Red Dwarf, there are other ways to watch.

All UKTV channels are available on subscription services provided by Sky, BT and Talk Talk.

The free-to-air channels are also available on Freeview and Freesat, which are usually included as standard with new televisions.

Viewers can also catch up on their favourite shows online at UKTV Play – available at uktvplay.uktv.co.uk

Virgin Media has accused the broadcaster of seeking ‘inflated sums’ to provide its paid channels.

‘We have been in extensive discussions with UKTV but we have not been able to reach an agreement which reflects the reality of how people are watching television in the 21st Century.

‘UKTV is insisting on holding back its channels, like Dave, which are freely available over the air and online, unless we pay inflated sums of money for its paid channels like Gold.

‘On top of this, UKTV is unable to provide the extensive on-demand programming which is expected of a modern day broadcaster.’

UKTV chief executive Darren Childs said it could not accept the ‘drastic’ cut in price that Virgin was seeking to show the paid channels on its pay-to-view service.

‘We’re hugely disappointed for the many customers who are losing out because our channels are no longer available through Virgin Media,’ he said.

‘We completely understand their frustration and would love to continue to bring them the shows and channels that they’re so passionate about, but we need a fair price to support our growing investment in programmes.

‘The reality is that we just can’t accept the drastic price cut that Virgin wants.’

According to UKTV, ‘around four million households’ were no longer able to access the channels after the midnight deadline passed.

The 10 channels are still available on other TV platforms including Sky, BT, Talk Talk, as well as Freeview and Freesat.

Viewers can also watch them online via UKTV Play.

UKTV is part-owned by the BBC, and a BBC Studios spokesman said: ‘This is clearly an attempt to negotiate through the press. We are fully supportive of the approach taken by UKTV management, who are leading discussions.’