A gang of fraudsters conned 170 savers out of £2.8million by selling fake development land on the Portuguese island of Madeira.

The six scammers used fictional companies with false brochures to tempt investors, and even adopted disguises to convince them the scheme was genuine.

Five of the group have been sentenced to more than 17 years in prison between them after one of the biggest investigations in City history and a 51-day trial at Southwark Crown Court.

The judge described the gang as ‘repellent’ for targeting the vulnerable and elderly. 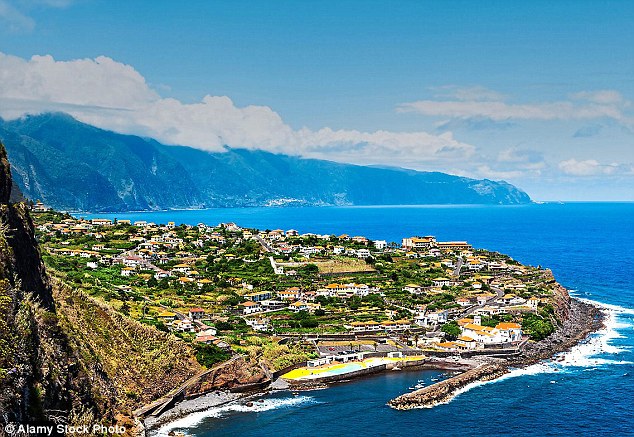 The sixth gang member, and its ringleader, former bouncer Michael Nascimento, will be sentenced next week.

Those jailed yesterday were sales chief Charanjit Sandhu, 28, Hugh Edwards, 36, and Stuart Rea, 50, who both served as senior lieutenants in the gang, and Nascimento’s 50-year-old assistant Jeannine Lewis. Ryan Parker, 25, a junior member, was given a two-year suspended sentence.

It is the second biggest prosecution ever undertaken by the Financial Conduct Authority watchdog, with key evidence seized following a raid on the gang’s offices near Canary Wharf.

Mark Steward, FCA enforcement director, said: ‘These fraudsters callously targeted investors who were often elderly and vulnerable, lying to them to get them to part with significant sums of money.’

Nascimento, 41, is originally from Portugal and had bought 4.3 acres of land on Madeira, previously used for growing potatoes.

Although the plot could never legally be built on, he claimed it was a prime development site.

Investors were sold shares in the land and wrongly told it would generate returns of as much as 228 per cent on their nest eggs, with salesmen pointing out that big banks have offered only tiny savings rates for years.

Nascimento operated through a network of different companies and produced glossy brochures claiming his business was one of the world’s top wealth managers.

He even invented a fictional chairman called David Gregory, using a stolen picture from an innocent businessman’s Linkedin profile.

The fraudster blew £76,000 on fees for his daughter’s private primary school, £23,000 on VIP season tickets for Arsenal – where he was pictured meeting manager Arsene Wenger – and £43,000 on a year’s rent for a house in Chislehurst, Kent.

The FCA is seeking to recoup money lost by the victims, but their investments are not covered by any compensation scheme and they are likely to get little back.

Investigators repeatedly shut down companies set up by Nascimento but he kept opening new ones. They eventually cracked the case through a raid on the company’s offices.

A separate raid at Nascimento’s house uncovered £1,850 in cash stashed among his DVD collection. The gang was arrested and released on bail, but Nascimento, Edwards and Sandhu were later remanded in custody after setting up further scams.

Sentencing the five, Judge Hehir said: ‘Some victims have lost everything they had. These were scams from start to finish.’

The FCA is investigating 29 similar scams and urged savers to be careful if offered an investment that seems too good to be true.

Now watchdog must sink teeth into the big boys

Well done to the bloodhounds at the FCA for bringing to justice the culprits in the Madeira boiler room scam – it’s just a pity the watchdog does not bring the same zeal to bigger scandals.

Those sentenced yesterday took around £2.7million from 170 investors, which plainly qualifies as a substantial fraud – but it’s relatively small beer in banking circles.

To put it in context, TSB boss Paul Pester’s bonus for 2016 was £2.4million. Of course, Pester has not been dishonest, just deeply disappointing.

He turned out to be just as much of a let-down as the rest. The FCA is investigating the tech meltdown at TSB but its findings are likely to be a damp squib.

When faced with a large and powerful target, the regulators become paralysed.

It is leading to a loss of faith in the system. Small-firm owners who lost money in the RBS-GRG and HBOS Reading debacles in particular are frustrated and disillusioned.

There are other cases such as the RBS Shareholder Action Group, which won a £200million settlement from the bank last year.

That seemed like a result until it emerged it had been co-founded by a known fraudster and that there are serious concerns about how it has been run. Yet it appears to have fallen through the regulatory net entirely.

The rationale is that these big cases do not fall within the regulator’s remit, but sticking slavishly to that line is a betrayal of victims. If FCA boss Andrew Bailey feels he does not have the powers he needs, he should fight to get them.