Gaucho steakhouse is the latest restaurant chain to go bust with £50m debts, putting 1,500 jobs on the line

The group, which comprises the Gaucho and Cau restaurant chains, said it intended to appoint administrators after failing to agree a sale of the business.

The Gaucho chain, which has 16 restaurants, could still be salvaged from administration if a buyer is found, although it is thought the 22 Cau sites will close for good. 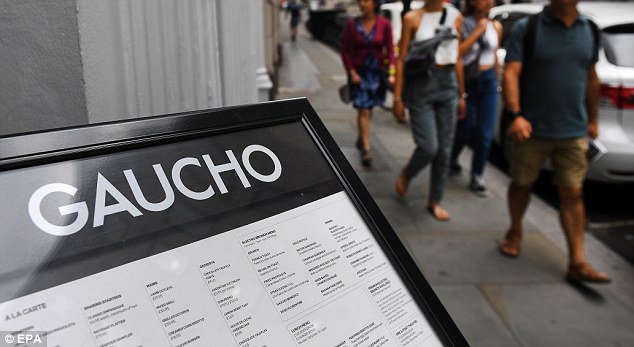 It is thought the firm owed £50million to its banks and faced a seven-figure tax bill.

The group, which is backed by private equity firm Equistone, becomes the latest high-profile restaurant group to hit troubles, after Prezzo, Jamie’s Italian, Byron and Carluccio’s all revealed plans to close outlets this year.

A Gaucho spokesman said last night: ‘Despite an extensive process which attracted proposals from a number of parties, it is with regret that, due to the complexities of the group’s legal structure, ongoing under-performance at Cau and the level of indebtedness, the directors have been unable to find an agreed, solvent solution.’

The UK is going through a crisis on the High Street.

During the first half of the year, around 50,000 jobs have either been axed or are expected to be lost, as retail workers bear the brunt from hundreds of store closures.

In the past few months, House of Fraser has put more than 6,000 jobs at risk with a radical store closure plan, while Poundworld has recently plunged into administration, endangering a further 5,100.

It adds to the jobs lost at Toys R Us and electronics specialist Maplin, which both collapsed earlier this year.

Cau is described as an aspirational casual dining chain. It was launched in 2010 and serves steaks and burgers.

Gaucho specialises in Argentinian steaks and fine wine and mainly has restaurants in London, as well as Leeds, Manchester, Dubai and Hong Kong.