Holidaymakers routinely overpay when buying currency – and there are many ways to get stung.

Often this is because of costs buried in poor exchange rates, time constraints when rushing to get away, misplaced loyalty in high street providers or uncertainty about how to get a better deal.

Follow our guide to how exchange rates work – and where to get the best currency deal. 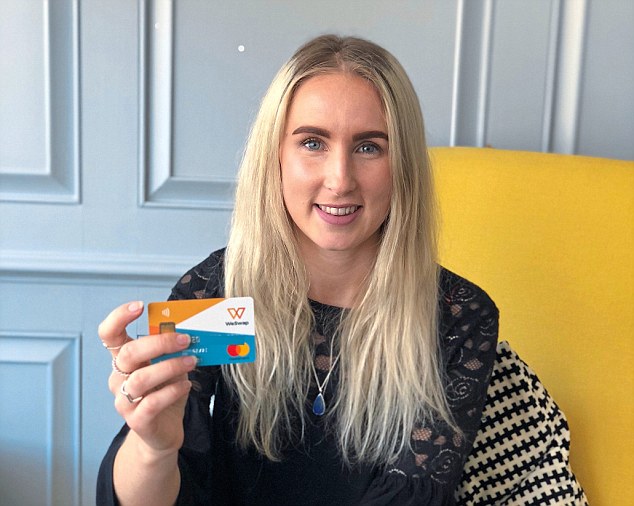 I swapped : Now Jess Hargreaves uses a prepaid WeSwap card to get a better deal on currency

WE WERE CHARGED £60 JUST TO USE BANK CARDS

Jess Hargreaves learned the hard way how to get a better deal on currency.

On a trip last year to Lisbon in Portugal, Jess, 24, and her boyfriend Blake, paid around £60 in charges when using their bank cards for spending and withdrawing cash from ATMs. These fees comprised non-sterling transaction fees, cash withdrawal fees and interest.

Jess, who lives in Acton, West London, and works for an investment firm, says: ‘It was a shock. We had no idea how bad the charges were from using our cards abroad until we got back.

‘It is such an easy way to waste money and the worst thing is most people have no idea. It was our fault for not checking but we decided never to do that again.’

Jess swiftly got a WeSwap prepaid card following a recommendation from a friend. She has since used it for trips to Australia and Bali and says she saved a small fortune as a result. Cash withdrawals of £200 or more are free while the fee for converting currency is capped at two per cent.

Jess adds: ‘Having the right card means that when I book a holiday, travel money is one thing I can now check off my to-do list straight away.’

How are you being ripped off?

In paying to swap pounds for holiday money, it is not always easy to ascertain whether you are getting a good deal or not.

Some also wrongly believe their bank will give them the fairest rate as a reward for loyalty over many years. No way.

In reality, even if your bank gives you a slightly better rate as a valued customer, it may still offer you a poor deal compared to alternatives. Meanwhile, many travellers who believe they have left it too late to buy currency at a competitive rate rely either on their bank or a ‘sucker’s bureau’ – one located at the airport.

The latter will inevitably offer a poor value exchange rate because they are the last chance saloon for those jetting off without overseas currency already in their wallets.

Using the wrong cards abroad and racking up fees, as well as being bamboozled about which currency to pay in while away, also add to the currency rip-off that millions of people experience on holiday every year.

A mid-market exchange rate is the benchmark for all currency deals.

This is the mid-point between the rates at which a trader wants to sell and a buyer wants to purchase.

It might also be referred to as the ‘interbank’ or ‘spot’ rate.

Derek Taylor, director of cash currency provider Travel Money Club, says: ‘The spot rate is the exchange rate you will find advertised on Google or Yahoo.

‘But it is not a rate the average consumer can buy currency at.’ High street banks and foreign exchange bureaux load this rate for consumers – making it worse – to cover costs and make a profit.

Rather than paying close attention to the exchange rate – a confusing set of digits at first glance – many people fall for the ‘zero commission’ marketing ploy.

This simply means there is no additional fee on top of the one already buried in the exchange rate offered.

On a swap of £1,000 to euros, a handful of commission-free high street providers checked by The Mail on Sunday on one day last week showed a difference of 37 euros between the worst and best rate.

This gap widens significantly when compared to the best rates available online or elsewhere.

The difference is even starker for other currencies.

But card providers such as the banks may add their own additional charges on top of this exchange rate when customers use them – usually around 3 per cent.

Taylor adds: ‘Banks who issue these cards may apply their own foreign transaction fees, so many cardholders will not get the exchange rates advertised by the card network.’

Other companies competing with the banks will waive such fees and use the wholesale rates of the card network – offering some of the very best deals on currency conversion.

Adding to currency confusion is how exchange rates differ online and on the high street.

This difference may even exist within the same company – such as the Post Office where rates even vary between branches. 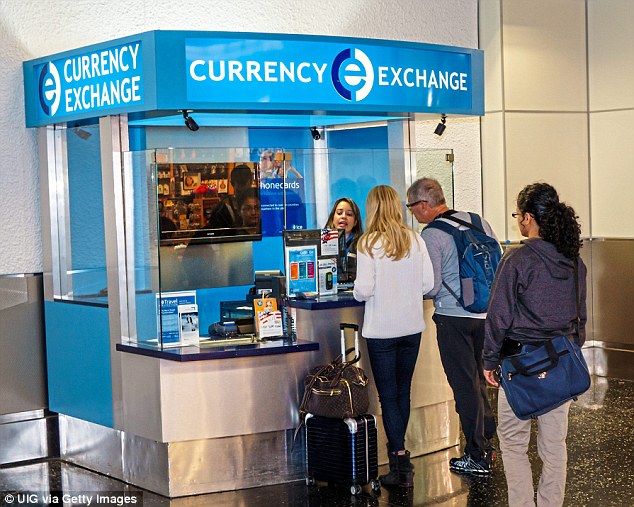 Rip-off: By far the worst place to change your money is at the airport

Similarly, a company offering decent rates on holiday cash might charge a poorer rate for currency loaded on to a prepaid card.

Finally, the mid-market rate is heavily loaded at the airport where you are sure to find the worst walk-up exchange rates.

Anyone keen on maximising the returns on their British pounds should consider modern alternatives to the high street – known as currency disruptors.

Some of these companies use the mid-market rate and then charge a small fee on top. This often works out cheaper for customers.

They include WeSwap which loads currency on to a prepaid card and TransferWise which offers a ‘borderless account’ and debit card for travel.

Travel Money Club is another new way to order holiday cash. It charges members £60 a year or £71.88 for those who pay monthly, but ‘guarantees the best exchange rates’.

After placing an order, holiday money is delivered to your door the next day by Royal Mail Special Delivery. If you do not save at least the sum of your membership each year compared to high street exchange rates, you will be refunded the difference.

The club targets frequent travellers or those exchanging large sums as you need to buy £2,500 worth of currency to benefit from the ‘moneyback guarantee’.

Taylor adds: ‘One customer recently saved £280 on a single Hungarian forint order compared with the high street while another saved £228 on Swiss francs. Last week 35 per cent of customers who used our guest feature to test drive the service would have saved their annual membership fee on their first order. It just shows how much margin is hidden in the exchange rates you find on the high street.’

Online is where you will find the best deals on currency – which is of no use to someone who does not have the internet, lacks the confidence to use it or simply does not want to shop via the web. 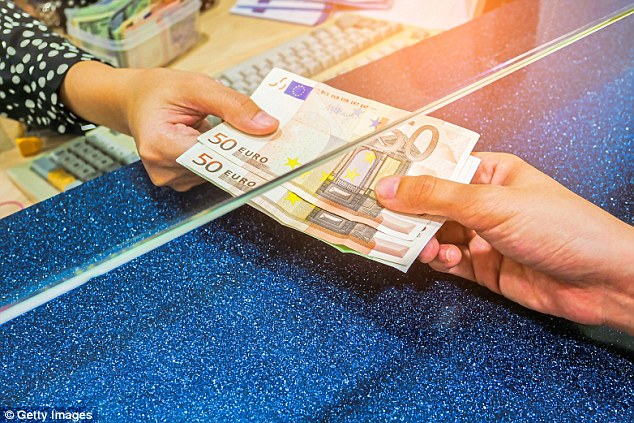 Confusing: Rates for currencies vary hugely across the high street

Options are more limited for ‘offline’ shoppers but first ask local banks for their exchange rates. Then compare at places such as John Lewis and M&S – both of which offer the same exchange rate in-store as they do online.

If you can use a computer but do not want to pay via the internet, then you can reserve currency at a better rate online then pay for it when you pick it up in person.

FROM PREPAID CARDS TO THE BEST CASH DEALS, HERE’S HOW TO STAY RIGHT ON THE MONEY…

Use websites such as TravelMoneyMax and Compare Holiday Money to find the companies offering the best foreign currency rates. You can search according to postcode, delivery or collection preference and how much time you have left before departure.

For free online delivery a minimum order is likely to apply – starting at around £500. Last-minute travellers relying on what the airport offers should order online for collection just before departure – as this rate will be better than the walk-up rate.

Often this can still be done even if there are only a few hours left to spare.

Top credit cards for travel do not charge fees for spending and give good exchange rates from Mastercard or Visa. These include Halifax Clarity, Barclaycard Platinum, Tandem and Aqua Reward.

The latter is a good option for people with less-than-perfect credit scores. Both Aqua and Tandem are paying 0.5 per cent cashback on spending both abroad and at home.

Load up a card in euros, US dollars or sterling and then use it to make purchases on holiday. This way you do not have to carry lots of cash and you are not required to pass a credit check to apply for a credit card. Some of the best cards available include WeSwap, Revolut and FairFX.

Even if prepaid cards can save you money, be mindful of fees which can apply to transactions, withdrawals from an ATM or loading currency on to them.

For example, WeSwap uses the mid-market exchange rate but charges a small percentage fee when you convert currency on the card. This is 1 per cent if you can wait seven days for a swap, 1.3 per cent for a three-day swap or 2 per cent for instant swaps. Cashpoint withdrawals are free – but only for sums of £200 or more.

The TransferWise ‘borderless account’ is a cheaper way to send and receive money in multiple currencies and comes with a debit Mastercard.

Digital banking newcomers Starling Bank and Monzo offer debit cards with no fees for using them abroad and both use the Mastercard rate of exchange.

Metro Bank customers can use their debit card in Europe without fear of fees and also enjoy Mastercard’s competitive exchange rate.