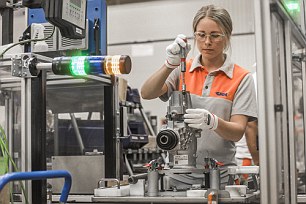 US car supplier Dana has made a £4.4bn bid for GKN’s automotive arm

The US car supplier that plans to buy GKN’s automotive arm would consider listing shares in both London and New York, dealing a further blow to predator Melrose’s takeover bid for the firm.

Dana’s finance director Jonathan Collins told the Financial Times that a secondary listing in London was ‘definitely an option’.

The suggestion is significant because some funds may have been discouraged from Dana’s bid, either because they don’t want to hold US shares or are unable to hold such shares.

Shareholders are choosing between Dana’s £4.4billion bid for GKN’s automotive arm, backed by GKN’s board, and Melrose’s hostile £8.1billion bid for the whole firm.

Crunch meetings are being held with shareholders ahead of the deadline for Melrose’s bid on March 29.

It has come under increasing scrutiny due to GKN’s role in the UK, where it employs 6,000 people making parts for airplanes, cars and fighter jets.

In the House of Commons yesterday, Theresa May again signalled the bid could be stopped.

Business secretary Greg Clark is examining whether it should be blocked on national security grounds.