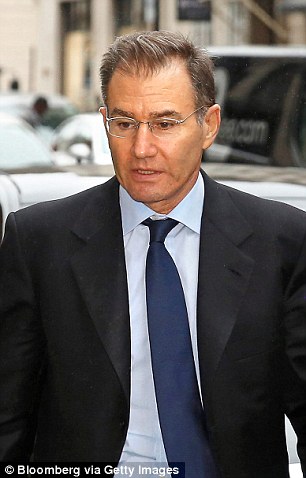 Glencore boss Ivan Glasenberg will receive a $120 million (£90 million) payday this week, days after it emerged the mining giant could be at the centre of a fraud probe.

The payout is one of Glasenberg’s largest since the Swiss-based company’s float on the London Stock Exchange in 2011. It has been dubbed the ‘millionaire factory’ for turning more than 400 managers into millionaires overnight.

The dividend payment to shareholders, including Glencore’s chief executive, who has an eight per cent stake, takes his total takings since the float to $990 million (£734 million).

Including his $1.5 million salary, it means Glasenberg has now been paid more than $1 billion in dividends in less than seven years.

Glasenberg excludes himself from the sort of bonus schemes which usually reward executives with lucrative payouts, instead taking large dividend windfalls.

He has also profited from topping up his shareholding by 110 million shares in 2015 when the company had to raise £1.6 billion to slash its huge debt pile. Glasenberg’s latest windfall, due to be announced on Wednesday, follows reports that the Serious Fraud Office (SFO) is poised to launch a formal investigation into allegations of bribery at its operations in the Democratic Republic of Congo.

Shares in the FTSE 100 company fell four per cent on Friday after Bloomberg reported that SFO investigators were preparing to seek permission to probe Glencore’s ties to controversial Israeli billionaire Dan Gertler.

Sign-off from senior SFO figures is required before it can launch a full inquiry.

Gertler, Glencore’s former business partner in the DRC, has been implicated in previous bribery investigations, including inquiries carried out by the SFO.

The US imposed sanctions on Gertler in December over alleged corruption. It alleged he used his friendship with the DRC’s president Joseph Kabila to act as a middleman for mining asset sales.

It said the country had reportedly lost more than $1.36 billion between 2010 and 2012 in underpriced asset sales to offshore firms that were linked to Gertler.

The Israeli owned stakes in two of Glencore’s key projects in the mineral-rich country before the company bought him out last year. He is suing Glencore, claiming he is owed $2.3 billion in unpaid royalties in a dispute that has been taken to the London courts.

Earlier this month, Glencore was granted a temporary injunction against Gertler, who obtained a freezing order on its two mines.

The SFO said it could not comment on whether it was preparing a full investigation.