Following months of diesel bashing, it appears the Government is rethinking its stance on the fuel.

That was the overriding impression given during a speech by business secretary Greg Clark on Tuesday, who said there was still ‘a place for diesel vehicles’ in the UK in the near future.

His comments were in stark contrast to messages from ministers in recent months, with the Government increasing taxes on new models, planning low emissions zones where diesel cars could be restricted and charged extra, and announcing a total ban on the sale of new models in 2040. 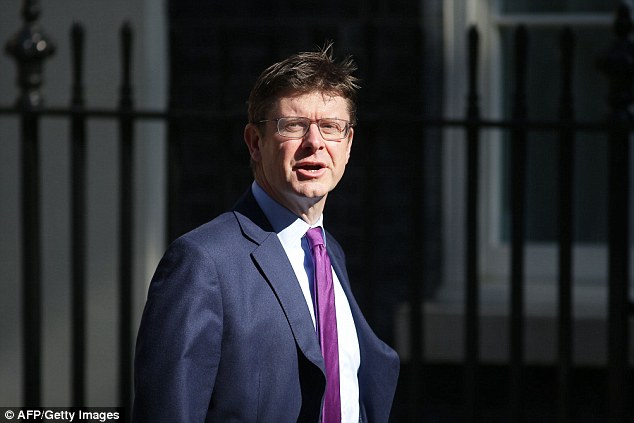 ‘There’s still a place for diesel’: Business secretary Greg Clark said on Tuesday that the UK Government would continue to recommend new diesel cars to some buyers as part of a new policy

Clark suggested the forthcoming Road to Zero policy – which will outline ministers’ plans to move the country towards a road network primarily made up of electric vehicles – would, surprisingly, include recommendations for diesels for some buyers.

The Secretary of State for Business, Energy and Industrial Strategy was speaking at the FT Future of the Car Summit on Tuesday – an industry event for manufacturers and law-makers to explain where the market is heading in the coming years.

Top of the agenda was to discuss the UK’s strategy to implement a ban on the sale of new petrol, diesel and hybrid cars in 2040 to improve air pollution in the UK, as well as the wider demonisation of diesel that has seen vehicle registrations plummet in the last 12 months.

Snippets of the forthcoming Road to Zero strategy were leaked over a week ago, with reports claiming that any vehicle incapable of covering at least 50 miles using electric power alone would be prohibited from sale in 22 years’ time.

But while many were expecting the policy to also include increased taxation measures – on diesel cars particularly – Clark suggested the complete opposite.

Instead, he said the new-generation diesel cars could play a significant part in improving the nation’s poor air quality levels and the fuel type would still be recommended to some drivers.

According to Auto Express magazine, the business secretary said: ‘I think it’s important to say that new-generation diesel engines can make big contribution to reducing our emissions.

‘I would expect the contribution of the higher standards of efficiency and emissions performance of diesel engines to continue to drive improvements in air quality and our greenhouse gas performance.’

In what could be a push to revive faltering new vehicle sales in the UK – which are down 8 per cent in total and 32 per cent for diesel cars – Clark urged motorists not to keep hold of their older, more polluting, diesels and said they should continue to consider the latest models. 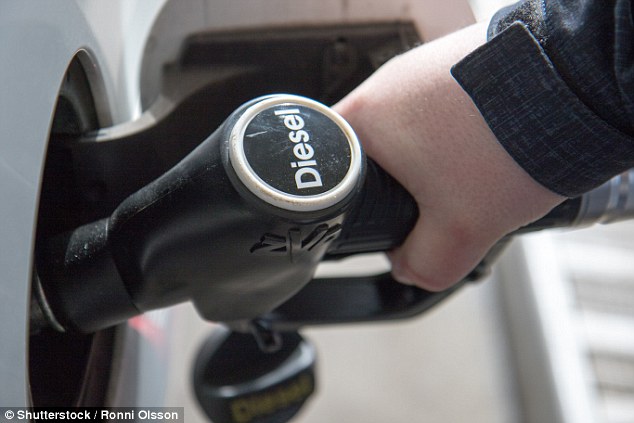 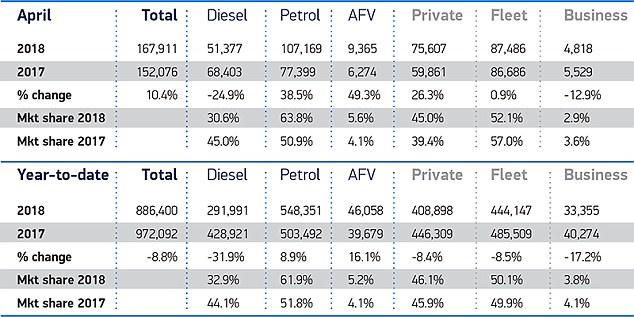 New car sales have plummeted in the last year following the government’s crackdown on diesel. For the year to date, total sales are 9% behind, with diesel demand down by almost a third

‘It would be the wrong decision for people to think that holding onto an existing diesel vehicle rather than upgrading to a much more environmentally friendly new one is a good step for the planet. We will, throughout our report, stress that,’ he told the audience.

‘There’s a place for diesel vehicles and there will be for some time to come.

‘If you’re driving a diesel-powered car long distances then that’s a very different impact than in the city.

‘So we need to make sure people make the right choices for the environment and for their own use.

‘What we’ll set out in the report we’re going to publish is how different choices may be right for different people in different circumstances.’

While not a complete U-turn, Clark’s comments are likely to infuriate drivers – especially diesel owners – who were persuaded to buy diesel cars by government for years based on their lower carbon dioxide emissions.

In a recent poll of 2,000 drivers by Close Brothers Motor Finance, more than two thirds (67 per cent) said that they are less likely to purchase a diesel car following the ongoing reports of surcharges over the last 12 months.

As part of its ‘Britain Under the Bonnet’ report, it also asked 200 UK dealers about the impact the government’s diesel crackdown has had on showroom activity.

Almost half (45 per cent) said their customers have been shunning diesel cars as a result of the negative publicity around the vehicles and the latest tax hike that came into force in April.

Society of Motor Manufacturers and Traders (SMMT) boss Mike Hawes has already blasted the Government’s confusing messaging regarding the 2040 ban, and said the forthcoming policy to implement it was ‘based neither on fact nor substance’.

He said: ‘Unrealistic targets and misleading messaging on bans will only undermine our efforts to realise this future, confusing consumers and wreaking havoc on the new car market and the thousands of jobs it supports.

‘We cannot support ambition levels which do not appreciate how industry, the consumer or the market operate and which are based neither on fact nor substance.

‘If Government wants the UK to be a global leader in zero emission transport it must provide a world class package of incentives and support to make this a credible policy.’

‘Greg Clark is driving the wrong way up a one-way street,’ she said.

‘Encouraging people to buy more diesel is the last thing the government should be doing right now.

‘We know diesel vehicles are responsible for the vast majority of toxic fumes from our roads, and even some of the latest models were found to be polluting over the legal limit.

‘It’s no wonder consumers are already rejecting this technology and many carmakers are moving away from it.

‘Instead of promoting diesel sales, ministers should come up with clear plans to ban them from 2030 and help drivers switch to electric.’ 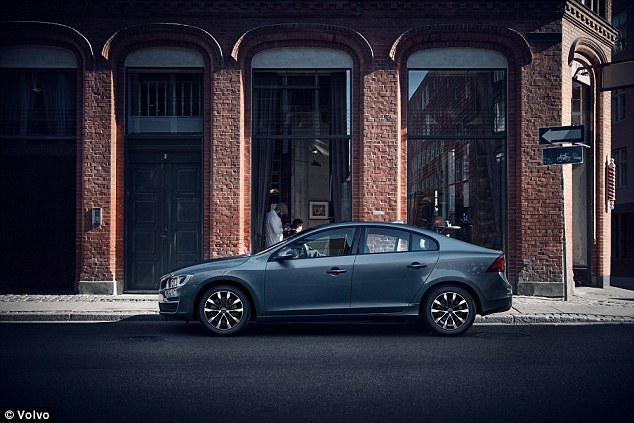 Despite Clark’s indication that diesel might still be promoted in some way, car makers have already started to react to the global crackdown on the fuel type by terminating development of diesel engines.

Volvo, which said all of its new cars would be electrified by 2019 and half of sales in 2025 would be zero-emissions models, today confirmed it would not be offering a diesel engine for its latest S60 family saloon.

‘Our future is electric and we will no longer develop a new generation of diesel engines,’ said Håkan Samuelsson, president and chief executive of Volvo Cars on Wednesday.

‘We will phase out cars with only an internal combustion engine, with petrol hybrid versions as a transitional option as we move towards full electrification. The new S60 represents the next step in that commitment.’

Porsche has already stripped all diesel models from its existing car range due to falling demand and Toyota has said it will no longer offer diesel engines in Europe after 2018.

Nissan is also expected to reveal plans to withdraw diesel production and sales in Europe, which could in turn impact on jobs at the Sunderland car plant. 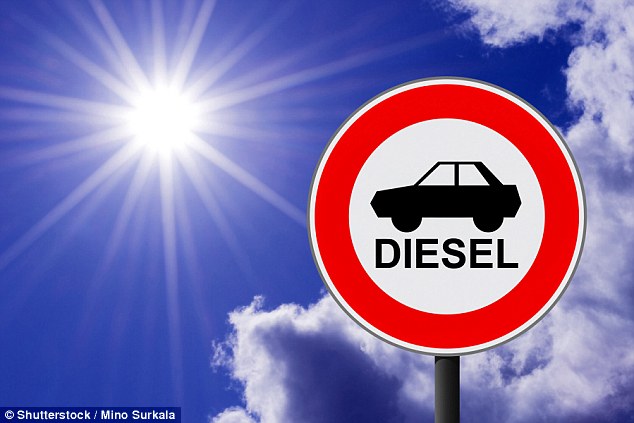 Cities across the world plan to impose bans on diesel cars in the next decade, which has resulted in some manufacturers ditching development of oil-burning engines

This is mainly in response to diesel vehicles facing bans across the globe, with German cities, Paris, Rome, Madrid, Athens and Mexico City all wanting the fuel type outlawed by 2025.

While the UK’s approach appears – for now – to be less extreme, leaked details of the Road to Zero policy earlier this month suggested there won’t be a place for the hybrid and plug-in hybrid vehicles that are on the market today when 2040 rolls around.

With no current hybrid car on sale capable of achieving 50 miles using just electric power, models like the Toyota Prius, Mitsubishi Outlander PHEV and Volkswagen Golf GTE would not qualify for sale in 2040 under the new measures.

However, a spokesperson for the Department for Transport refuted leaked details of the report, saying: ‘It is categorically untrue that Government is planning to ban the sale of hybrid cars in the UK by 2040.

‘We do not comment on leaked draft documents. The Road to Zero Strategy is yet to be finalised and has not been agreed by Ministers.’

Used electric car sales are up by a third in 2018

The SMMT confirmed on Wednesday that talk of bans for diesel, petrol and hybrid had seen a surge in demand for electric cars on the used market.

Demand for petrol engine cars fell by 10 per cent in the first quarter of 2018, while second-hand diesel sales increased by 2 per cent.

However, zero emission electric car sales rose by more than a third (34 per cent), with 2,927 EVs finding new homes in the first three months of the year.