UK retail sales volumes, or the amount of goods bought, rose by 0.8 per cent in February, double than analysts expectations of 0.4 per cent, mostly thanks to rising food, petrol and online sales, according to the Office for National Statistics.

But monthly data is often volatile – and the more reliable three-month trend still points to falling sales, mostly because of strong declines at the end of last year. 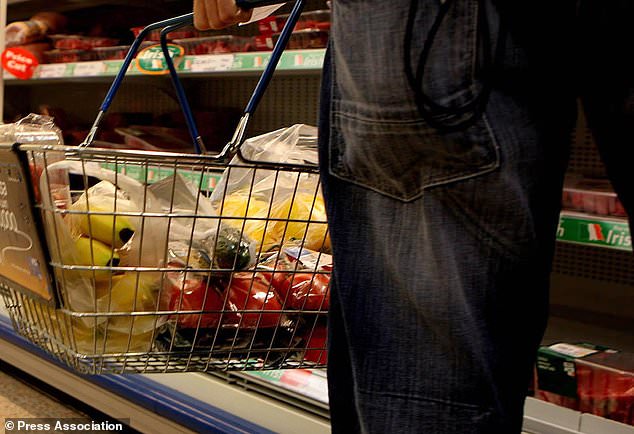 Sales volumes in the three months to February were 0.4 per cent down on the previous three months, the first decline over an equivalent period since March 2017.

ONS senior statistician Rhian Murphy said: ‘Retail sales did grow in February, with increases seen in food, non-store and fuel, but this followed two months of declines in these sectors.

‘However, the underlying three-month picture is one of falling sales, mainly due to strong declines across all sectors in December.’

While supermarkets were responsible for much of February’s sales growth – food sales rose by 1.2 per cent on January – retailers selling non-food items, especially clothing and household goods stores, saw a decline both in terms of quantity bought and amount spent when compared with January 2018.

As squeezed Britons focused their spending on essential items, non-food sales fell by 0.3 per cent last month, with clothing and department store sales down by 0.6 per cent and 1 per cent respectively, according to the ONS. 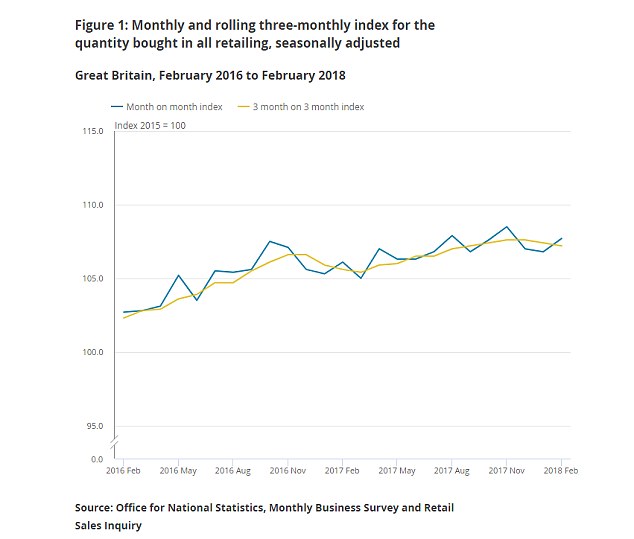 It comes as non-food bricks and mortar retailer have been struggling of lately, as shown by the demise of the likes of Toys R Us and Maplin.

But more stores seem to be on the brink of collapse. Yesterday, Carpetright admitted it will have to close some of its 470 UK stores and New Look said it will axe 60 shops.

It comes Moss Bros and B&Q’s owner Kingfisher revealed poor sales and the owner of Claire’s Accessories filed for bankruptcy in the US.

Richard Lim, chief executive of Retail Economics said: ‘Retail sales appeared to bounce back after two consecutive months of declines. An element of pent-up demand is likely to have benefited some retailers, but the underlying trend remains soft. Inflation is still eroding shopper’s personal finances which is contributing to the apparent malaise on UK high streets. 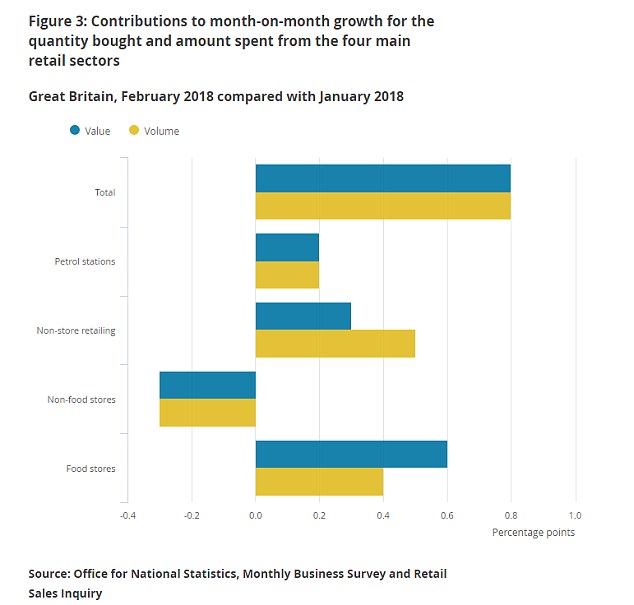 Non-food retailers, especially clothing and household goods stores, saw a decline both in terms of quantity bought and amount spent when compared with January 2018

‘But consumer demand is just one side of the equation. Retailers are battling against spiralling costs and seismic structural changes which has become debilitating for many retailers, evidenced by a recent wave of administrations.’

On a more positive note, price rises seem to have eased a little in February, with shop price inflation dropping to a 13-month low of 2.5 per cent, down from a recent peak of 3.3 per cent in late 2017.

ONS’ Murphy added: ‘Store prices continue to rise across all store types, but at a lower rate than the previous month due to a slowdown in price growth, though clothing and household goods stores continued to see stronger price rises.’

Ben Brettell, senior economist at Hargreaves Lansdown, said that despite February’s rise, the champagne should remain on ice for now.

‘The monthly numbers are always volatile and the underlying trend is still one of weakness.

‘There’s also a risk of further disappointment in March, with the Beast from the East bringing economic disruption and keeping consumers at home.’

Howard Archer, chief economic advisor to the EY ITEM Club, said: ‘Along with March’s bad weather, this suggests that the retail sector may detract from GDP growth in Q1. But a decline in shop price inflation to a 13-month low offered a hopeful portent for the future.’