Hamleys owners swoop in to snap up House of Fraser

Hamleys’s owner is preparing a swoop for House of Fraser.

Investors C Banner International owns French Connection in China as well as the legendary toy store, and has started discussions which would see it buy a 51 per cent stake in the department store group.

If the Chinese group’s bid is accepted it will be the fourth time House of Fraser has changed hands in just over three decades. 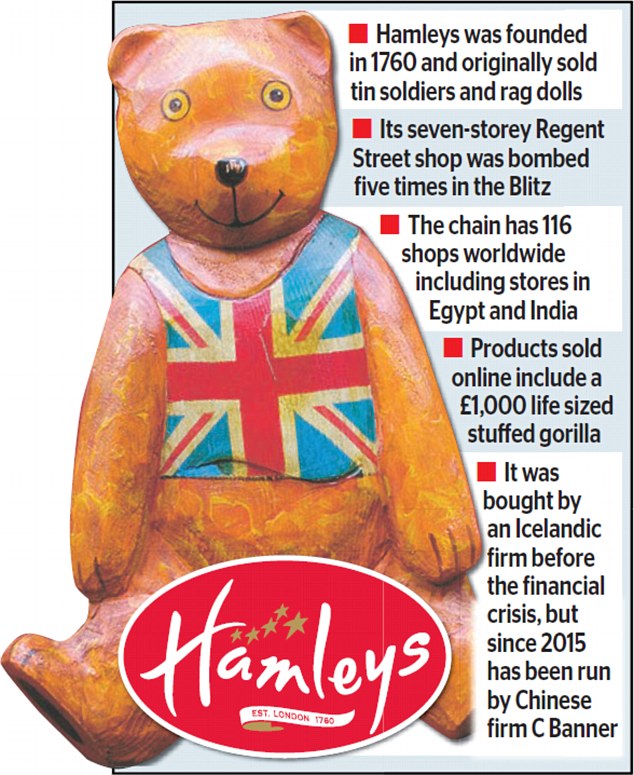 The store is already owned by one Chinese conglomerate, Sanpower, which has an 89 per cent stake in the 169-year-old retailer, with the remainder owned by Sports Direct tycoon Mike Ashley.

Sanpower had promised to open 50 House of Fraser stores in China after buying it in 2014 for £480million.

But the plans have failed to materialise with just two being opened.

C Banner’s interest comes after House of Fraser called in accountants KPMG to advise on a restructuring which could involve closures and job cuts.

One option on the cards is an insolvency procedure known as a Company Voluntary Agreement (CVA), which was deployed by Toys R Us and Maplin shortly before they fell into administration.

Fashion chain New Look also recently implemented a CVA, allowing it to close 60 stores with almost 1,000 on the line.

House of Fraser has 59 stores and employs 17,500. Concerns about its health were sparked in January when it issued a plea to landlords for rent reductions.

A week later the store published disappointing Christmas results which saw sales slide both in the shop and online by 2.9 per cent and 7.5 per cent respectively.

House of Fraser has gradually been restructuring its management team in a race to revive the business. Last year it appointed Alex Williamson, who spent nine years heading up Goodwood Racecourse, as chief executive.

Last week House of Fraser implemented its latest round of job cuts with around ten staff in the company’s head office understood to have been affected.

Since the store ran into trouble, Sanpower’s billionaire chairman Yuan Yafei has been plugging it with millions of pounds to keep it on an even keel.

In March, Sanpower revealed plans to sell a 51 per cent stake in House of Fraser to a secretive Chinese billionaire Ji Changqun, 50, who owns investment group Fullshare Holdings.

Despite its discussions with C Banner, Sanpower has not ruled out selling more of its holdings in House of Fraser to a third party.

According to its latest financial results, C Banner’s revenues dropped 5.8 per cent to £160million (1.4bn Chinese yuan) last year, while profits were broadly flat at £103million.

Since purchasing Hamleys for £100million in 2015, C Banner has opened three stores in China, with its latest in Beijing spanning more than 1m sq ft over five floors – double the size of Hamleys’s flagship store in London.

Analysts have warned of the death of the traditional department store as the likes of Debenhams and House of Fraser struggle to attract customers.

Last week Debenhams revealed an 85 per cent plunge in profits to £13.5million in the first six months of its financial year, as the store’s sales slumped 2.8 per cent.