Bosses fear tens of thousands of City jobs could be lost after the Government set the scene for a ‘hard Brexit’ in financial services last week.

The Chequers agreement, released in a White Paper on Thursday, was broadly welcomed by business and gives protection to airlines, medicines and goods.

But City bosses were infuriated after the detail of the document made clear the industry would not be granted the close EU relationship they had lobbied so hard for. 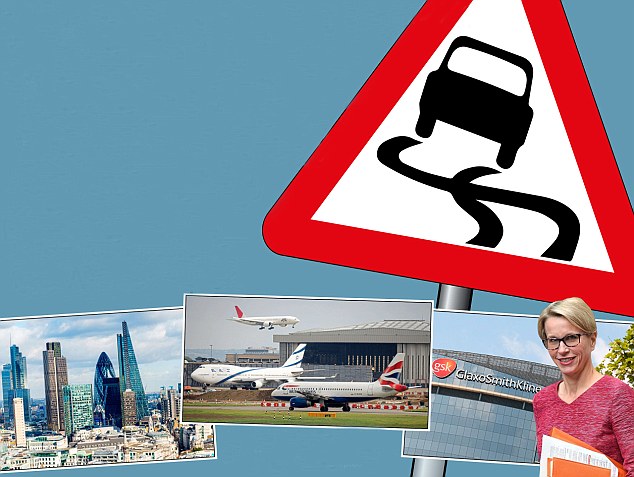 Anger: City bosses were infuriated by the White Paper, but British Airways owner IAG and GlaxoSmithKline, run by Emma Walmsley, right, accepted it

They said the Government had dropped their proposal for a close-knit relationship, badged ‘mutual recognition’. This proposal, previously endorsed by Chancellor Philip Hammond, would have seen the UK and EU recognise each other’s banking, insurance and fund management rules.

Professionals based in London dominate the European market, and serve clients across the EU. But the plan – which was dismissed by EU politicians as a ‘cake-and-eat-it’ approach – has been substituted for an alternative proposal. The UK is instead pursuing an extended version of a so-called ‘equivalence’ that the EU has with some other non-EU states.

Sources told The Mail on Sunday that the current proposals leave them little better off than a worse-case ‘hard Brexit’ scenario.

‘It’s putting us in the same position as any other country,’ said Sir Mark Boleat, the former head of the City of London Corporation who holds high-profile positions in the sector. ‘The worst-case scenario is the loss of up to 75,000 jobs and £10 billion a year of tax revenue over five to ten years.’

He added: ‘I’ve always said London will remain a big international financial centre. But clearly it will be less big than it would have been. And it will be less of a centre for Europe. We’re seeing Europe not having one centre any more.’

Bronek Masojada, chief executive of insurance giant Hiscox, said the sector was heading for a ‘hardish Brexit’. Masojada, whose firm has had to set up a subsidiary in Luxembourg to service EU customers ahead of Brexit, said it was a ‘disappointment’ that the UK was not seeking mutual recognition. He suggested that instead, the UK appeared to be pursuing an approach that will see it bound by EU-prescribed rules, rather than make and influence them.

‘It’s tough enough getting regulation right. But to end up as a long-term rule-taker would be a foolish place to be,’ he said.

Miles Celic, chief executive of TheCityUK lobbying group, said it was ‘regrettable and frustrating’ that the Government was not pursuing the mutual recognition approach, while City of London Corporation boss Catherine McGuinness said the White Paper was a ‘real blow’ for the sector.

Another City source branded the equivalence plan as ‘fundamentally flawed’ because it does not cover all financial services sectors and agreements can be terminated at short notice. But the White Paper, which signalled an intention to build a ‘combined customs territory’ with the EU, was seen overall as a soft approach to Brexit.

British Airways owner IAG said: ‘We are comfortable with the UK’s proposal on aviation,’ while drugs giant GlaxoSmithKline, run by chief executive Emma Walmsley, said: ‘We welcome the White Paper and the additional detail it provides on several areas which are key to preventing disruption to the supply of medicines and vaccines.’