Heathrow airport has blown more than £6bn in interest on its debts over the past 12 years, a Mail investigation has found.

Meanwhile its debt pile has risen to £13.4 billion – about the cost of the controversial third runway. 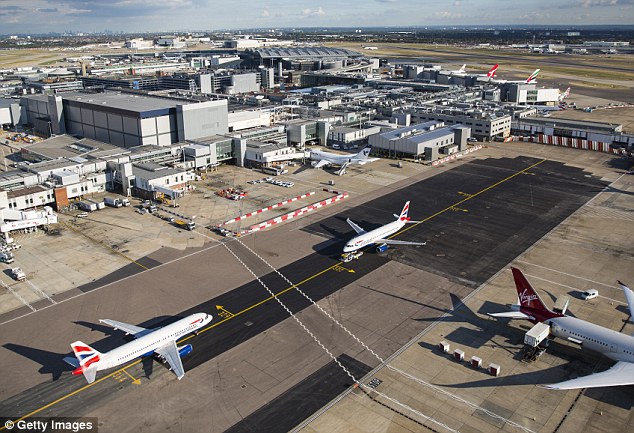 Heathrow is planning to spend around £14 billion on the project, but its mammoth debts reveal just how stretched the airport has become.

Airline bosses fear Heathrow may not be able deliver the runway on budget.

While it has paid more than £6 billion in debt interest over 12 years, shareholders have extracted £3.6 billion in dividends.

James Price, campaign manager at the TaxPayers’ Alliance, said the expansion of Heathrow ‘will be good for taxpayers and good for trade and business’.

But he warned against ‘reckless’ spending and borrowing.

Heathrow makes money by charging landing fees to airlines, which are passed on to passengers – around £22 for each fare.

Airline bosses want Heathrow to guarantee not to increase these to pay for the runway.

But the airport is planning to spend £33 billion on infrastructure in coming decades – including the runway and terminals to serve an extra 52m passengers a year.

Most of the work is due to be completed by 2035, and there is growing concern that the airport will have to raise charges significantly to pay the bills. Heathrow was a listed company until 2006 when it was bought out by a consortium led by Spain’s Ferrovial for around £16 billion, including £10 billion in cash mostly financed by debt.

They have invested more than £10 billion in the airport over the past decade.

Last month, chief executive John Holland-Kaye, 53, said Heathrow was a ‘national disgrace’ 12 years ago, but was now something to be proud of.

He told BBC’s Radio 4 Today programme: ‘We have fantastic investors – exactly the kind of people you would want in a big infrastructure project like this.

‘It’s entirely privately funded and it’s right that they should earn dividends on the investment they have made. They have rebuilt the airport. It’s now something we can all be proud of.’

The Civil Aviation Authority regulates how much Heathrow can charge in landing fees and how much investors can earn.

It said Heathrow’s finances were ‘low risk and stable’ and that investment-grade debt finance such as Heathrow’s could be low cost and efficient.

A Heathrow spokesman said: ‘Heathrow is a strong, healthy business with an investment-grade credit rating which we will keep throughout expansion.

‘Since we were taken private, 90 per cent of the airport’s operating cash flows have been re-invested into transforming Heathrow into one of the world’s top airports.

‘Expanding Heathrow will make Britain the best connected country in the world at no cost to the taxpayer. To achieve this, an appropriate return must be provided to private investors and we will work with our regulator to determine the right level.’