Greedy hedge funds will have a major say in the multi-billion pound battle for Sky after amassing control of nearly a fifth of its shares.

Their stakes in the satellite broadcaster were last night worth almost £5billion as a bidding war between Rupert Murdoch’s 21st Century Fox and Universal Studios-owner Comcast continued to escalate.

Fox came back with an increased offer of £24.5billion for Sky on Wednesday but before the day was out its rival had responded with a bid worth £26billion. 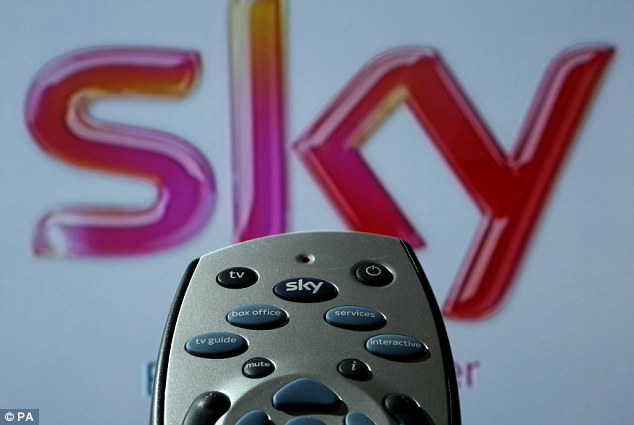 Takeover battle: Fox came back with an increased offer of £24.5bn for Sky on Wednesday but before the day was out its rival Comcast had responded with a bid worth £26bn

And as analysts predicted the bidding war would take the final price even higher, analysis by the Mail revealed vultures in Mayfair, New York, San Francisco and Chicago are set to reap the benefits.

Overall they control about 18.6 per cent of Sky, according to regulatory filings, having slowly built their stakes since last year.

It could mean they have crucial sway in deciding the British company’s fate.

Fox already controls 39 per cent of the company and is trying to buy the rest. If successful, Fox wants to hand Sky to Disney as part of a wider deal in which Fox is selling its entertainment assets for £54billion.

But Comcast has muscled in, putting in a rival bid for Sky then making a counter-offer for Fox’s entertainment assets.

Both Disney and Comcast are desperate to acquire the businesses to help them better compete against tech giants Amazon and Netflix, with Sky’s 23m customers in seven countries making it an attractive purchase.

Russ Mould, an analyst at AJ Bell, said that concern – and Fox’s eagerness to seal its deal with Disney – meant the bidding war for Sky could intensify.

He added: ‘We are in a position now that is potentially very good for the sellers, where the strategic reasons for the acquisition may override the financial considerations.

And in the middle of all that, I’m sure the hedgies will be looking to maximise whatever returns they can.’

Shares in Sky have continued rising amid the bidding war, suggesting investors think the tussle is far from over. Last night they closed 3.4 per cent higher, or 51p, at 1545p.

Brian Roberts, Comcast’s chairman and chief executive, reportedly ordered his advisers to move quickly with a counter-offer for Sky and is thought to be on the verge of making another bid for Fox’s entertainment assets.