Help to Save scheme has been delayed Spring Statement document shows

Revealed in the Budget in March 2016 and proudly championed personally by then Prime Minister David Cameron, Help to Save was expected to be rolled out next month for the new tax year.

However, the Government revealed today it has decided to slow the pace of the rollout to provide the ‘best customer experience possible.’ 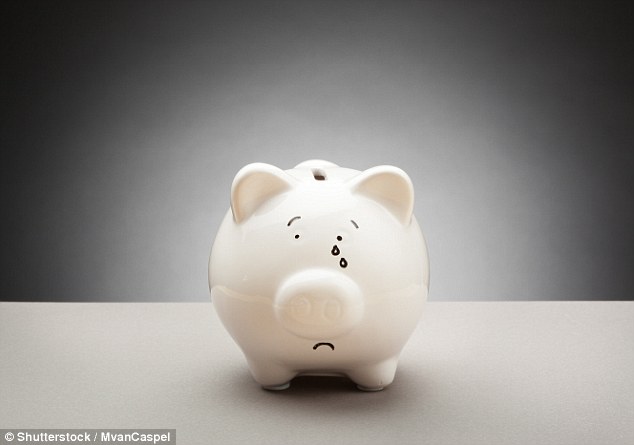 Help to Save: The scheme was revealed in January 2016 by then Prime Minister David Cameron

The idea of Help to Save is to enable 3.5million employees on working tax credits or universal credit to save up to £50 a month and pocket a bonus of 50 per cent, earning a maximum of £600 after two years.

Savers can carry on the scheme for an additional two years meaning those who saved the maximum £2,400 over four years would receive a £1,200 government top-up.

In March 2016, the Treasury said the scheme would be fully launched in April 2018 to encourage and support those on low incomes to save.

However, it is likely that with Mr Cameron and Chancellor George Osborne exiting, the scheme was not made a priority.

The estimated cost, mainly arising from the additional public spending associated with the Government contribution, was £70million in 2020-21, rising to around £100million in 2022-23.

This reflected a relatively low take-up assumption, given the limited scope for low-income individuals to save the sums involved.

The Treasury document from the Spring Statement today said: ‘At the time of the original costing we gave this a “high” uncertainty rating, citing take-up and the time that individuals hold onto savings among the main reasons.

‘The Government originally announced that “accounts will be available no later than April 2018”.

‘It has now decided to slow the pace of the rollout to provide the “best customer experience possible”. A full rollout has been delayed to October with a pilot having started in January.

‘HMRC has told us that the IT and other aspects of delivery remain on track. We now expect total ‘Help to Save’ spending to reach £85million in 2022-23.”‘ 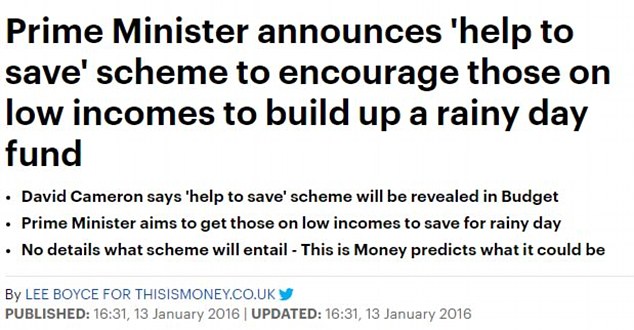 Delayed: How This is Money revealed the news more two years ago

The measures were designed as officials claimed nearly half of Britain’s adults have set aside less than £500 for emergencies.

When announcing the scheme, Mr Cameron claimed he wanted to give hard-working people extra support to fulfill their potential and to transform life chances across the country.

He said at the time: ‘That’s what these new measures will achieve – helping someone start a savings fund to get them through difficult times, giving people on low incomes a pay rise and making sure teenagers have the experience and networks to succeed.’

Mr Osborne added: ‘This Government is determined to improve the life chances of the poorest in our society and our new Help to Save scheme will mean millions of low income savers across the country could now receive a Government bonus of up to £1,200 to help them build up their savings.