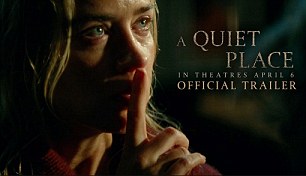 The low-budget movie about a family trying to survive alien invasion has made £250million despite it costing just £15million to make. It was produced by Viacom’s Paramount Pictures.

Profits at Viacom, which also owns Nickelodeon, MTV, and the UK’s Channel 5, rose 1per cent to £369million despite a 4per cent revenue fall.