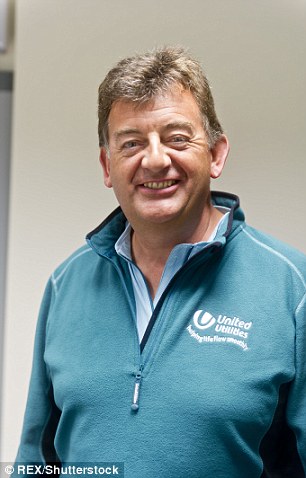 The boss of United Utilities will receive a £29,000 windfall on Friday, two days before he imposes a hosepipe ban.

Steve Mogford will receive the payment in dividends from the company, as he owns more than 100,000 shares in United Utilities worth £700,000.

The chief executive’s payout is larger than the average income in the UK, around £28,000.

It is part of a £180million payment to shareholders by the North West water firm, due to be paid on Friday. The hosepipe ban comes in next weekend with offenders facing a fine of up to £1,000.

Water firms have been savagely criticised for making huge payments to shareholders rather than plugging the leaks that could prevent hosepipe bans.

United Utilities hopes the ban will save 22million gallons of water daily. But more than four times that volume is lost to leaks each day in the area covered by the firm, figures from water regulator Ofwat show.

United Utilities has already paid £1billion in dividends in the last four years.

The nine major water utilities made £18.8billion in post-tax profits in the decade to 2016, but paid out almost all of that – £18.1billion – in dividends.

Professor David Hall, a water industry expert at the University of Greenwich, said: ‘The money is available but it’s not reaching the right places, which are the leaks. It’s reaching the wrong places: the pockets of shareholders.’

A United Utilities spokeswoman said: ‘Steve Mogford will be receiving a cash dividend of 26.49p on the 110,119 shares he holds. He is required to purchase and retain a shareholding in the business and as such he receives any dividend along with all other shareholders.’