Fears about the department store’s future are growing following reports that Ashley is backing away over concerns about its pension funds.

Experts said administration would leave it vulnerable to ‘scavengers’ looking for a cut-price deal. The news leaves the future of its 17,500 staff at risk. 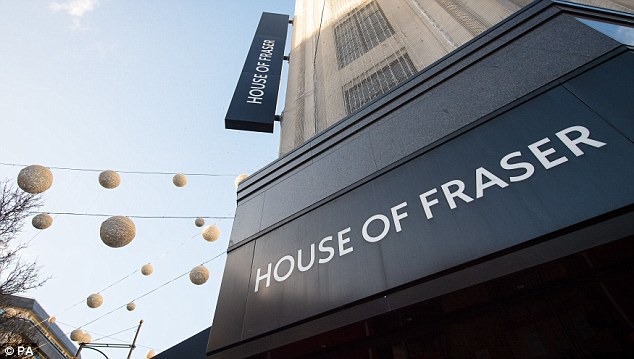 Reports emerged last month that Ashley had offered a £50million lifeline, but he is said to have had second thoughts, and is expected to withdraw his offer over concerns that he could be ‘crucified’ if anything went wrong with House of Fraser’s two defined-benefit pension schemes, The Sunday Times reported.

Although House of Fraser’s pension schemes have a surplus, a takeover would need the go-ahead from The Pensions Regulator and the Pension Protection Fund.

Last night, House of Fraser settled a legal challenge from a group of landlords against its restructuring proposals.

They were unhappy with plan to close half its 59 shops in exchange for £70million in funding from a potential new Chinese owner, C Banner.

Law firms Begbies Traynor and JLL, which represent the group of landlords, confirmed the matter had been settled, allowing House of Fraser to go ahead with the store closures.

But the retailer is still in desperate need of cash after C Banner walked away from the deal following a 70per cent plunge in the firm’s share price, forcing it to issue a profit warning.

Experts warned that it was now likely to collapse.

Retail analyst Nick Bubb said: ‘It will still be difficult for management to avoid putting the business into administration soon, with the scavengers gathering.

‘But there is a small chance that House of Fraser may now be able to rally enough support to press on with the store closure plan and raise some short-term funds.’

Retail consultant Richard Hyman said: ‘I think what is presented as a rescue will emerge, possibly after it goes into administration. Anyone putting any money in would want to do so unencumbered by debt and pension obligations. You get the feeling administration is imminent.’

Ashley’s retreat would narrow its options to a handful of potential saviours, including turnaround specialist Alteri Investors and Philip Day, who owns the Edinburgh Woollen Mill chain.

But Day is thought to want to put it through insolvency to offset the risk involved in taking it on.

House of Fraser, which is owned by the Chinese conglomerate Sanpower, declined to comment.