House of Fraser on the brink as Chinese rescue deal fails with 17,000 jobs on the line

House of Fraser on the brink as Chinese rescue deal fails with 17,000 jobs on the line

House of Fraser was on the brink last night after a Chinese investor lined up to save the retailer walked away from a rescue deal.

The Chinese owner of Hamleys, C Banner, pulled out of its offer to buy the chain, saying it was scrapping the offer after its own share price plunged by 70 per cent, forcing a profit warning to be issued.

The future of House of Fraser and its 17,000 staff now looks in doubt as it scrambles to find the cash to pay its rent bill, which is due in September. 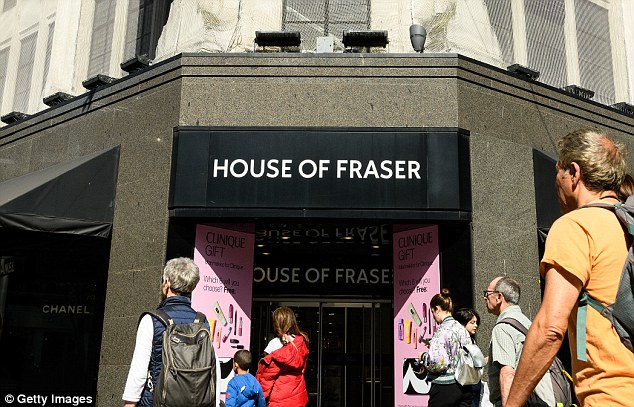 Threat: The Chinese owner of Hamleys, C Banner, has pulled out of its offer to buy House of Fraser

House of Fraser is in talks with other potential buyers to secure a rescue.

If it fails it could crash into administration and disappear from the High Street, joining the likes of Toys R Us and Maplin which collapsed earlier this year.

A spokesman said: ‘Discussions are ongoing and a further announcement will be made as and when appropriate.’

C Banner’s withdrawal could trigger an offer by Sports Direct tycoon Mike Ashley who has an 11 per cent stake in House of Fraser.

…Yet Next is thriving

Next defied the gloom with a sales rise despite revenues at its high street shops falling.

Sales at Next climbed 6 per cent in the 14 weeks to May 7 as shoppers snapped up sunglasses, T-shirts and swimwear during the summer heatwave.

Online sales surged 12.5 per cent, compared to its store purchases which tumbled 5.9 per cent.

Despite dismal shop sales, Next is still increasing the number of stores it opens this year and is adding 100,000 sq ft of space to its 530-strong estate.

Next is also negotiating rent costs and lease lengths with landlords. Rents are being slashed by as much as 25 per cent.

He is understood to have approached House of Fraser last month with a fresh £50million investment deal to stave off its collapse.

But experts questioned whether Ashley would want to take on retailer considered to be in technical default on its loans by credit ratings agency Moody’s.

Nick Bubb, an independent retail analyst, said: ‘The problem is that House of Fraser is in serious financial trouble and it’s not obvious why businessmen like Mike Ashley will prop it up when they can get it for practically nothing if and when the business goes into administration.’

C Banner’s restructuring plan collapsed last month when a group of landlords launched a legal challenge in court, saying they had been treated unfairly.

House of Fraser has since filed an objection to the challenge but is still waiting for a formal date to dispute it in court.

The chain was founded in 1849 in Glasgow as Arthur and Fraser, to sell textiles. It fell out of family ownership in 1981 when Professor Roland Smith, who went on to chair Manchester United, took over.

Since then it has changed ownership numerous times and was sold to the Al-Fayed family for £615million in 1985.

Chinese conglomerate Sanpower bought it for £480million in 2014, planning a vast expansion into China. Sports Direct was unavailable to comment.