An electronics and homeware chain run by the owners of House of Fraser has gone bust.

Brookstone, a chain bought by Sanpower in 2014 at the same time as it paid £480million for House of Fraser, has filed for bankruptcy in the US.

It will now close all 101 shopping centre stores, with its 35 airport shops and website staying open for business. 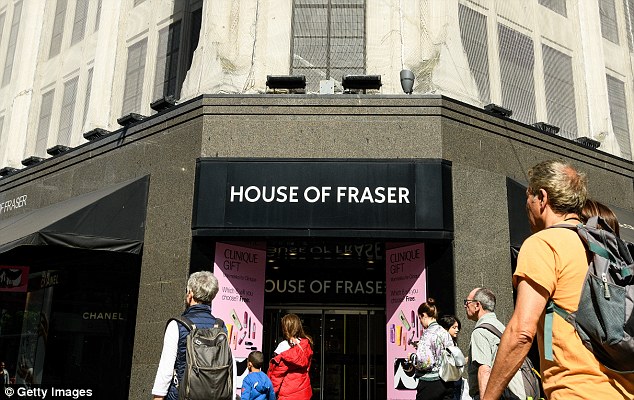 Brookstone was bought by Sanpower in 2014 at the same time as it paid £480m for House of Fraser, has filed for bankruptcy in the US

This latest twist in the House of Fraser saga demonstrates the perilous financial position of its Chinese owners.

The department store is clinging for survival after an attempt to sell it off to another Chinese investor failed.

Richard Hyman, an independent retail analyst, said: ‘House of Fraser is far from the only Sanpower investment to hit the buffers – portents are not good for the department store chain.’

Philip Day is expected to make a swoop for Jacques Vert owner Calvetron Brands this week after it went bust for the second time in less than a year in May, according to Sky News. The tycoon is also one of the potential suitors for stricken retailer House of Fraser.

Day is expected to make the Jacques Vert purchase through a company separate to Edinburgh Woollen Mill, which houses retailers including Peacocks, Jane Norman and Jaeger.

Sanpower has closed almost half of Brookstone’s shops since buying it in 2014 for £134.4million after it filed for bankruptcy the first time.

Like Brookstone, House of Fraser is preparing to shut half its 59 stores in a bid to save money. It is hoping that axing a chunk of its shops will make the business more attractive to potential suitors.

House of Fraser’s financial troubles emerged earlier this year when it began writing to landlords begging for rent reductions on its shops.

Sanpower revealed it was looking to sell off the 169-year-old department store chain in March, but has not found a buyer.

The Chinese owner of Hamleys, C Banner, walked away from an offer to buy a 51 per cent stake in House of Fraser after its own share price plunged 70 per cent and it was forced to issue a profit warning.

Experts say House of Fraser is likely to fall into administration before a buyer takes it on as it would give it a reduced price tag. House of Fraser declined to comment.