The average cost of a home jumped to a record high of £217,010 last month, new figures published by Nationwide reveal.

In the year to July, average property prices across Britain rose by 2.5 per cent, compared to a 2 per cent rise a month earlier. 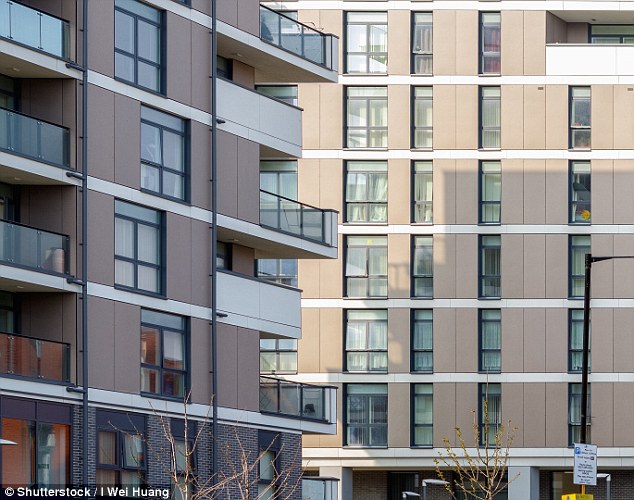 On a monthly basis, average house prices increased by 0.6 per cent in July, following a 0.7 per cent increase in June.

Nationwide expects the Bank’s MPC to raise interest rates from 0.5 per cent to 0.75 per cent on Thursday.

‘A 0.25 per cent increase in rates is likely to have a modest impact on most borrowers who are on variable rates’, Mr Gardner said.

He added: ‘While the impact for most borrowers is likely to be modest, it’s important to note that household budgets have been under pressure for some time because wages have not been rising as fast as the cost of living.

‘Indeed, in real terms (after adjusting for inflation) wage rates are still at levels prevailing in 2005.’

Recent research from the English Housing Survey revealed that around 12 per cent of homeowners spend 30 per cent of their income on their mortgage repayments every month.

‘For those, some of whom will be on variable rates, any rate rise will be a struggle, even though the impact on the wider economy and most households is likely to be modest’, Mr Gardner said.

Over the course of the year, Nationwide expects average property prices across the country to rise by one per cent.

With annual house price growth hovering around the 2 to 3 per cent mark for the last year, there has been ‘little change in the balance between demand and supply in the market’, Mr Gardner said. 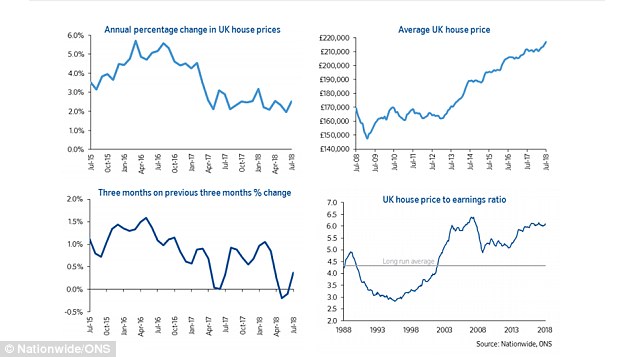 While average house prices are on the up, economists and industry experts remain cautious about the extent to which they will continue to rise. 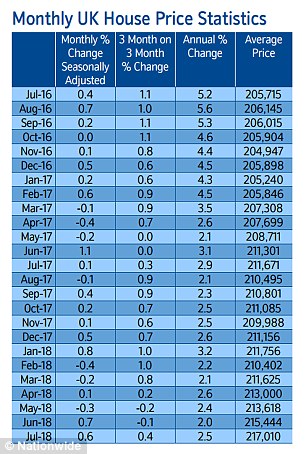 ‘We expect house price gains over 2018 will be limited to a modest 2 per cent. At this stage, we expect prices to rise no more than 3 per cent in 2019.

‘The fundamentals for house-buyers are likely to remain challenging – and they will not be helped by the Bank of England likely hiking interest rates from 0.5 per cent to 0.75 per cent on Thursday.’

Mike Scott, chief property analyst at Yopa, said: ‘If the cost of borrowing continues to creep up, the longer-term effect on the housing market may be more severe, as mortgage rates rise from the historically low levels that we have enjoyed for the past decade.

‘However, the shortage of supply will continue to prop the market up, and any reversals are likely to be short-lived.’

‘House prices are slowly creeping up month-on-month and continuing to rise faster than wages. With a first-time buyer deposit costing just under two years’ of average earnings, there hasn’t been much relief for those hoping to get a foot on the property ladder. For many, homeownership still feels very out of reach.

‘An interest rate rise this week could also affect potential buyers. If rates are to rise, this should have a downward impact on property prices in the long-run, but first-time buyers will suffer the effects of incomes being squeezed and loan rates increasing, making it harder for them to get a mortgage in the short-term.’ 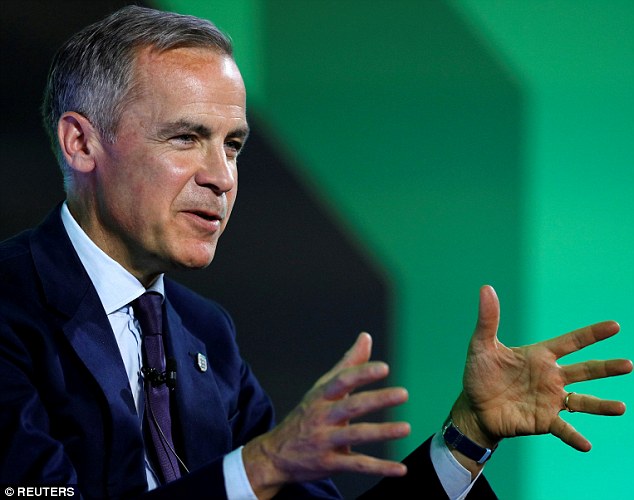 Expectations: Nationwide expects the Bank of England MPC, led by Mark Carney, pictured, to raise interest rates from 0.5 to 0.75 per cent on Thursday

Brian Murphy, Head of Lending for Mortgage Advice Bureau, commented: ‘This morning’s figures indicate a modest level of month on month growth, which highlights that the delicate balance between stock and supply has been maintained in recent weeks.

‘This would perhaps suggest ongoing buyer confidence and that those who are currently transacting are doing so regardless of any political and economic uncertainty.

‘That all said, the fragmented market conditions we’ve seen of late remain, with some parts of the UK performing better than others both in terms of transaction numbers and values, a picture which is likely to continue for the foreseeable future.’

On the London market, Jeremy Leaf, a north London estate agent and a former residential chairman of the Royal Institution of Chartered Surveyors, said that while ‘relatively few’ mortgage borrowers would be immediately affected by a rise in interest rates, ‘the direction of travel always seems to have an adverse impact on confidence and is likely to reduce low levels of transactions even further.’

Official data published by the Office for National Statistics last month revealed that London saw the worst annual growth in house prices across the country, with prices falling by around 0.4 per cent.

While this marked the fourth consecutive month that London house prices slipped, prices in the capital remain exorbitant, with the average cost of a home at around £479,000.