House prices jumped £3,000 last month despite a ‘subdued’ property market, according to the latest Halifax figures.

Low mortgage rates and strong employment are continuing to prop up house prices, Britain’s biggest mortgage lender said, but annual property inflation slipped back again to just 1.9 per cent, in May. 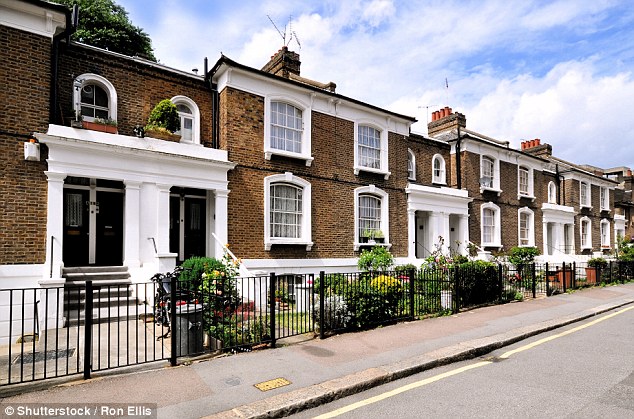 Halifax said that a shortage of homes on estate agents’ books is propping up prices.

The easing back of house price growth comes against a backdrop of a two-speed property market emerging across the UK.

In a reversal of fortune of recent years, London and the commuter belt are now suffering, with homes taking longer to sell and prices cut, while previously slower areas, including the Midlands, North and major regional cities are seeing higher demand driving sales.

The substantial 1.5 per cent rise in property values in May was put down to the volatility of monthly figures, whereas measured over a quarterly basis house prices are up just 0.2 per cent.

The decline in annual property inflation means that Britain’s salaries continue to rise faster in percentage terms than house prices, with the latest ONS figures showing wages up 2.6 per cent annually.

The problem for buyers is that the rise in house prices equates to £3,500 on a year ago, while the rise in wages is about £700.

Recent figures from Nationwide showed that house prices are stuck near record highs compared to wages.

Halifax said that a shortage of homes on estate agents’ books is propping up prices.

‘After a sharp rise in January, mortgage approvals have softened in the past three months, whilst both newly agreed sales and new buyer enquiries are showing signs of stabilisation having fallen in recent months.

‘The continuing strength of the labour market is supporting house prices. In the three months to March the number of full-time employees increased by 202,000, the biggest rise in three years.

‘We are also seeing pay growth edging up and consumer price inflation falling, and as a result the squeeze on real earnings has started to ease.

The Bank of England had been widely expected to raise interest rates in May, but it erred on the side of caution and held the base rate at 0.5 per cent, due to struggles on the High Street, concerns over consumer confidence and inflation falling by more than forecast.

This has led to already cheap mortgage rates being cut slightly again.

However, high house prices mean that the biggest hurdle for most home buyers remains raising a deposit for a first home, or the savings needed to move up the ladder.

Mortgages have got more plentiful and cheaper for those with smaller deposits, however, with 95 per cent mortgages offering the chance to get on the property ladder with just £10,000 for a first-time buyer purchasing a £200,000 home.

The key to getting a home sold is to price realistically, say agents, particularly in the areas where the property market has softened.

Jeremy Leaf, north London estate agent and a former Royal Institution of Chartered Surveyors residential chairman, said: ‘Once again we are seeing the rather topsy turvy pattern to the housing market – up one month, down the next.

‘It is the same on the ground – no real pattern, with buyers and sellers negotiating hard but not always successfully.

‘Looking forward, we expect more of the same and possibly slightly better as we await figures reflecting the crucial spring market period.’