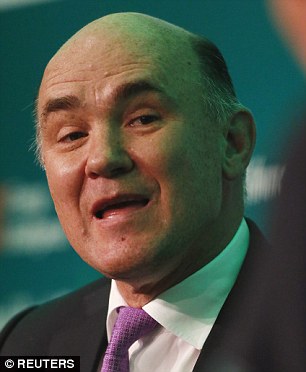 Vitol chairman Ian Taylor is among the biggest beneficiaries of the £1.2bn windfall

About 350 top ranking employees received about £3.4million each on average on top of salaries.

It brings to around £7.6billion the amount Vitol has given staff via share buybacks since 2007, says a Bloomberg analysis.

Among the biggest beneficiaries will be chairman Ian Taylor, a Tory donor who gave £350,000 to the Remain campaign and withdrew his name from consideration for a knighthood in 2016 amid a row over Vitol operations.

The 62-year-old London-born tycoon has turned a modest Dutch fuel dealer into a global giant.

It is now thought to be worth more than £15billion – trading enough fuel every day to supply Germany, France, Spain and the UK.

However, last year’s payout came despite a reported 25 per cent drop in profits last year to around £1.1billion.

Recovering oil prices and a shift in market structure have made it harder to squeeze margins out of buyers.

Taylor said this year: ‘It is pretty bloody tough. It’s probably very good for the world that the oil price is in a very nice sweet spot. However, that’s not very good for trading.’

Oil is now at around $70 per barrel after falling to below $40 per barrel in 2015. Cuts in production from Opec members to shore up the oil price also make life tougher.

Rival Trafigura also posted a 22 per cent drop in profits to September last year, while Glencore is shielded by its mining arm.

Taylor, who is thought to be worth £185million and is credited with rescuing the Harris Tweed industry through his investment in producer Harris Tweed Hebrides, stepped down as chief executive this year to become chairman, to be replaced by Russell Hardy, a long-time ally.

Taylor asked not to be considered for a knighthood in 2016 amid controversy after the company was fined £13million in 2007, admitting illicit payments to the Iraqi state oil company, and in 2012 trading oil with Iran in defiance of EU sanctions.

Water bosses cash in too

Liv Garfield, 42, the boss of water firm Seven Trent, could scoop a further 72,800 shares worth around £1.3million at today’s prices.

It is part of a new bonus pot for ten directors worth around £3.7million, due to vest in three years’ time.

Finance boss James Bowling, 49, could get about £620,000. New research by the union GMB has found that 54 bosses at the UK’s nine privatised water and sewer companies were paid more than £175million over the past five years.