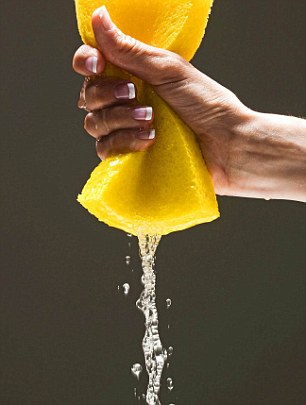 Banks will each rake in as much as £300 million from last week’s rate rise as they try to wriggle out of passing on the boost to savers.

Money Mail can reveal that Royal Bank of Scotland (RBS) expects its income to soar by £300 million by 2020 as a result of the Bank of England’s announcement.

Other banks are also expected to make millions more as they squeeze cash from loyal borrowers and current account customers.

Four major banks and building societies – Lloyds, Barclays, Nationwide and TSB – have said they will pass on the interest rate rise to mortgage customers. On top of this, in the past few months firms have slashed perks on current accounts and hiked credit card rates.

Just last week Lloyds Banking Group revealed that its profits had jumped by almost a quarter to £3.1 billion in the first half of the year.

HSBC has also reported a 4.6per cent jump in its half-year profits to £8.3 billion. RBS announced last week it would be paying its first dividend to investors in ten years after reporting a £1.8 billion profit.

Ewen Stevenson, chief financial officer and executive director at RBS, then told analysts that the firm expected to make even more money from rising rates. Barclays and Santander reported declines in profits, but still made £1.7 billion and £903 million respectively. Here, Money Mail explains how banks are raking it in while savers suffer.

MORTGAGE COSTS ARE CREEPING UP

Mortgage borrowers have enjoyed record-low interest rates for many years, with some homeowners able to lock into two-year fixed deals as low as 1per cent. But as interest rates begin to creep back up, lenders are looking for ways to make money from their customers.

Around 1.3 million borrowers with mortgages that track the Bank of England base rate will already have seen their rate rise since last week, with some customers reporting that they had received emails and texts informing them that their bills were going to increase within minutes of the announcement.

A further 1.8 million are on what is known as their lender’s standard variable rate. Unlike with a fixed deal, which is protected from any rate rise for the duration of its term, banks and building societies are free to increase the cost of their standard variable deals at any time. 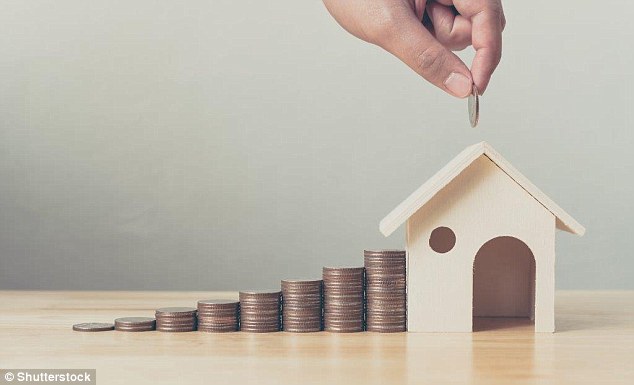 Mortgage borrowers have enjoyed record-low interest rates for many years, with some homeowners able to lock into two-year fixed deals as low as 1per cent. But as interest rates begin to creep back up, lenders are looking for ways to make money from their customers

And less than a week after the Bank of England’s decision to increase rates, Barclays, Lloyds, Halifax, Nationwide, TSB, the Co-operative Bank’s Platform brand, Skipton BS and Danske Bank have already said they will pass on the entire 0.25per cent hike.

It means that anyone who does not realise their cheap fixed deal has expired, or is trapped on their lender’s standard variable rate (SVR) because they do not meet new affordability rules, will see their monthly mortgage bills jump.

Banks have been accused of treating loyal customers like cash cows, with the gap between what lenders charge new customers and those on a SVR ballooning five-fold in the past six years.

For example, Yorkshire Building Society currently offers new customers with a 35per cent deposit a 1.35per cent two-year fix, while those on its standard variable rate pay 4.99per cent. On a typical £150,000 home loan taken over 25 years, this is an extra £3,444 a year.

Switching to a fixed-rate deal will shield borrowers from rate rises, but if you have waited until now to do so you may find you have missed out on the best deals. 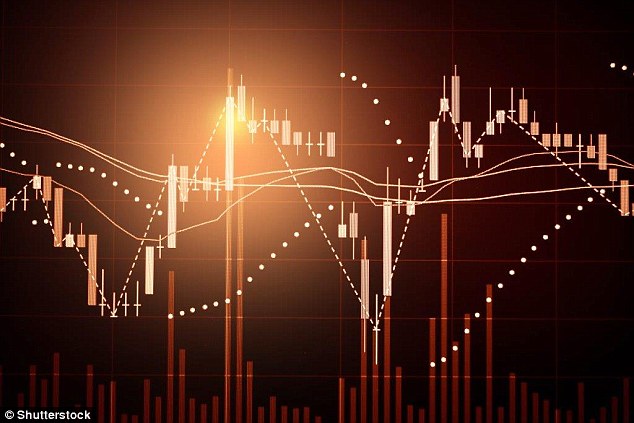 Some banks and building societies began increasing fixed rates on mortgages as early as April when it was widely expected that the Bank of England would vote to increase interest rates in May. However, when no change was made, lenders failed to lower their rates again

Some banks and building societies began increasing fixed rates on mortgages as early as April when it was widely expected that the Bank of England would vote to increase interest rates in May. However, when no change was made, lenders failed to lower their rates again.

In January, borrowers looking to lock into a two-year fixed rate mortgage would have paid on average 2.35per cent, according to data analysts Moneyfacts. In May, average rates for two-year deals had risen to 2.51per cent, and today they stand at 2.53per cent. Five-year fixed rates have also risen but at a slower pace from an average of 2.87per cent in January to 2.91per centin May, and 2.93per cent in July.

Around 28 mortgage lenders also increased their fixed rates in July ahead of last week’s rate rise, but many of the changes were small as lenders did not want to deter new customers.

Meanwhile, mortgage fees are creeping up. The average fee on a fixed mortgage deal is now £1,028, up from £1,019 at the start of the year, according to Moneyfacts.

Credit card interest rates have jumped to a near record high over the past nine years. When the Bank of England base rate plunged to 0.5per cent in 2009, the average credit card rate was 15.72per cent, according to official figures. Yet despite interest rates remaining low, the average annual percentage rate (APR) has since rocketed by almost three percentage points to 18.26per cent.

And rates are continuing to inch up. Since March this year, Bank of Scotland, Halifax, HSBC, Lloyds, M&S Bank, Post Office Money and Sainsbury’s Bank have all increased their credit card APRs by one percentage point from 18.9per cent to 19.9per cent. Experts say firms give a number of reasons, alongside wider interest rate rises, for pushing up rates. 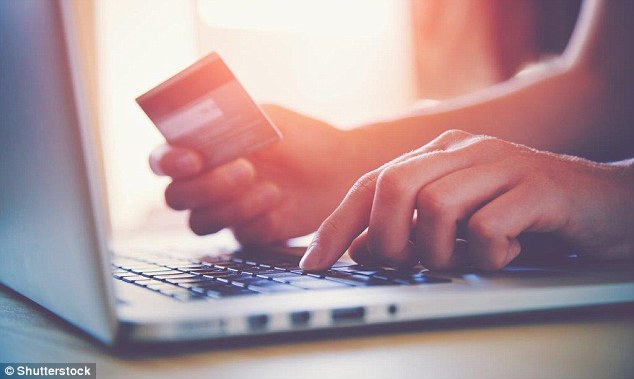 For example, if the regulator finds evidence that credit card lending is hitting dangerous levels, firms may push up rates to put off the most risky borrowers.

The cost of transferring debt to an interest-free card has also increased. At the start of the year the average balance transfer fee was 2.04per cent, according to Moneyfacts. Today it’s 2.15per cent. On a £2,000 balance this would mean paying £43 instead of £40.80.

Figures from the Office for National Statistics show households spent more than they earned last year for the first time since 1988. The average family went £900 in the red — yet banks keep encouraging us to borrow more on cards.

Citizens Advice has warned some banks are upping credit limits without customers requesting an increase. Nearly six million people received an uninvited credit limit increase over a 12-month period, an average increase of £1,481.

Current accounts that pay interest and reward customers with cashback have become hugely popular among savers looking for ways to boost their returns. The average easy-access savings account currently pays around 0.21per cent. By comparison, some current accounts, such as Nationwide’s FlexDirect account, offer savers returns of as much as 5per cent on balances up to £2,500.

However, after luring in customers with enticing deals, banks are increasingly paring back the perks they offer, slashing rates and hiking fees. Santander launched its popular 123 account in 2012 at a cost of £2 a month, or £24 a year.

In return customers were paid up to 3per cent on balances up to £20,000, as well as 1per cent cashback on water, council tax and Santander mortgage repayments, 2per cent on energy bills and 3per cent on mobile, broadband and TV bills.

It meant that if someone held the maximum £20,000 in the account they could earn more than £576 after taking into account the £24 annual fee and before any cashback was added.

But in January 2016 Santander more than doubled its monthly fee from £2 to £5. Customers were then dealt a second blow later that year when the bank slashed the maximum interest rate it paid customers from 3per cent to 1.5per cent on balances up to £20,000. It means that customers could now only earn up to £240 a year after fees and before cashback.

Other banks soon followed with cutbacks. Lloyds Bank’s Club Lloyds account previously paid up to 4per cent on balances up to £5,000. If customers kept the maximum £5,000 in their account they could earn £200 a year.

But in January 2017 Lloyds cut its rate to just 2per cent on balances between £1,000 and £5,000, reducing the maximum return to £100 a year. Then, just as banks and building societies were preparing for a rate rise in July this year Lloyds lowered its rate again. It now pays customers just 1.5per cent, or £75 a year.

In July, Bank of Scotland, part of the Lloyds Banking Group, cut the interest rate on its Vantage account from 2per cent to 1.5per cent on up to £5,000.

Halifax, part of the same banking group, last month announced it would be reducing the monthly payout on its Reward and Ultimate Reward current accounts from £3 to £2 a month from October 1.

Halifax, Lloyds and Bank of Scotland have also increased the fees they charge on their packaged current accounts by £2 a month. The Lloyds Platinum account now costs £19 instead of £17 for a deal that includes phone and breakdown cover.

Santander and Lloyds Banking Group declined to comment on whether they would be putting up their current account rates and perks in the wake of last week’s base rate rise.

Banks made around £2.3 billion from overdraft fees in 2016, according to the City watchdog. The majority of this came from planned overdrafts, with just under a third made up of unauthorised overdraft charges.

This is where customers have accidentally slipped into the red without giving their bank warning and face hefty penalties. According to the Financial Conduct Authority (FCA), around 13 million Britons use overdrafts and in the worst cases pay as much as £450 a year in fees.

Currently, if customers exceed an agreed overdraft limit they are typically charged a set fee of between £5 and £10 per day, meaning they pay the same charges regardless of how much they go over their agreed limits. Customers typically pay between 0.1per cent and 0.5per cent per day in interest for an agreed overdraft, but this soars to more than 10per cent when it is unauthorised. 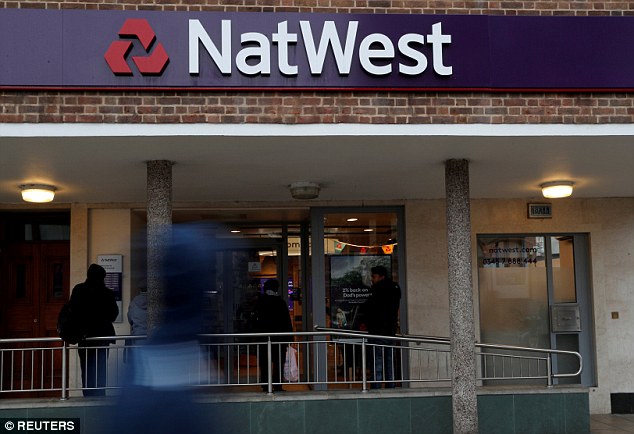 NatWest charges its Select current account customers a £6 monthly fee plus 19.89per cent interest for overdrafts agreed in advance

NatWest, for example, charges its Select current account customers a £6 monthly fee plus 19.89per cent interest for overdrafts agreed in advance. If you borrowed £500 for a week you’d pay £7.75 — the equivalent of 81per cent interest, according to Moneycomms, the personal finance site.

Some banks are overhauling their charges as the City regulator investigates whether customers are being treated fairly. But not everyone is ending up better off. Lloyds, for example, scrapped unauthorised overdraft charges in November. Customers now pay 1p for every £7 of overdraft used over £100.

Under the old rules, a Club Lloyds customer with an authorised overdraft would have paid £6.22 to borrow £250 for three days, according to Moneycomms. Now they pay just 63p. But those who need to dip more into their overdraft will pay more than before. Previously, borrowing £2,000 for 12 days would have cost £17.47. But now it’s almost double that at £32.76.

New rules introduced in May mean banks will have to send customers text message alerts when they go into their overdraft, be clearer about fees when people open accounts and offer online tools that explain charges more clearly.

The FCA says these proposals are expected to save customers up to £140 million a year. The regulator is also considering an overall price cap and banning daily fixed fees in favour of interest charges.