How claims firms are swooping on delayed passengers at airports

Vulture claims firms are circling holidaymakers at arrival gates in a bid to snatch a slice of compensation for flight delays.

Those who fall prey could lose hundreds of pounds despite being able to claim what they are owed for free.

Passengers are entitled to statutory compensation of up to €600 (£530) if their plane lands more than three hours late. They can easily make the claim themselves for free via the airline. But claims firms have spotted a juicy opportunity by doing the chasing on their behalf. 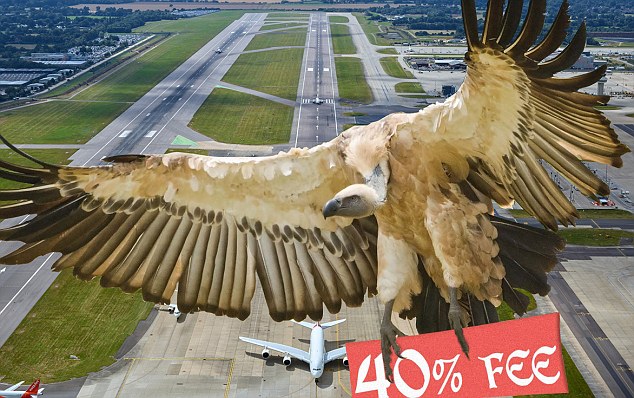 The agents catch weary passengers on their way through arrivals halls – and encourage them to complete forms on the spot, which they then take to the airlines. Claims firms take a big chunk of any payout – sometimes 40 per cent or more.

The official compensation ranges from €250 (£220) to €600 per passenger depending on the length of delay and the distance flown. A family of four entitled to a total of €1,000 in compensation would lose at least €300 in agents’ commission.

The claims agents flock around airport arrival halls at holiday destinations such as Barcelona and Malaga in Spain, and swoop when they learn that flights are more than three hours delayed.

Martyn James of free online complaints service Resolver says the scourge has been on the rise in the past 18 months as agents hunt for alternatives to payment protection insurance (PPI) claims, which are expected to dry up in advance of next year’s final deadline to claim.

He says: ‘They loiter at the airports near popular resorts using flight tracker apps on their laptops or phones to spot delays. It is easy pickings and there is not much work involved. They are unregulated, so anyone can set themselves up as a claims firm.’ 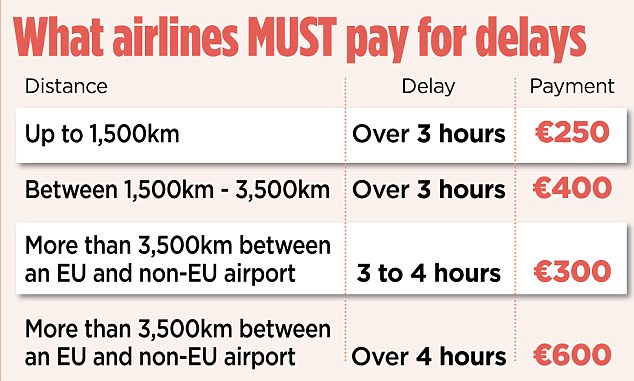 The problem is aggravated by the failure of many airlines to inform passengers of their entitlement to apply for compensation direct – or how to start the process. Travellers often leave the plane oblivious to the fact that they are owed money for the disruption to their trip.

The rules apply to those flying from a European Union airport on any airline, and those arriving at an EU airport on an EU airline. Iceland, Norway and Switzerland, as part of the European Free Trade Association, are treated as EU countries for this.

Food, drink, free phone calls and emails must also be offered to passengers on any flight delayed by two hours or more. For those stranded overnight, hotels must also be provided.

Passengers whose flights are cancelled should be booked on other flights and compensated for the resulting delay in their arrival, or given a full refund.

When Harriet Dennys flew to Palma de Majorca last month with her husband Rory, three-year-old daughter Tabitha and mother-in-law Minnie she was understandably frustrated that the easyJet flight landed nearly three and a half hours late.

Heavily pregnant with her second child and with a tired toddler in tow she was taken aback to be approached by agents in the baggage hall proffering forms for her to claim compensation.

Harriet, a reporter for The Mail on Sunday, says: ‘There were lots of people handing out forms. They were not from the airline. One of the forms was from a firm based in Germany.’ 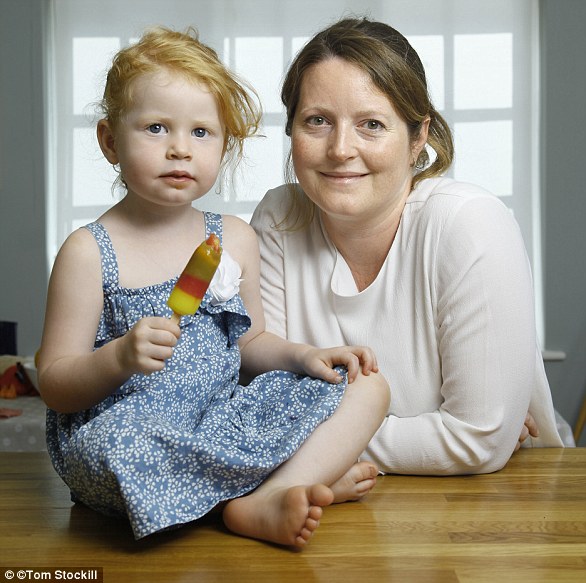 Harriet, 39, refused their assistance and later carried out an internet search about compensation for delays.

She says: ‘A whole raft of claims firms appeared high in the search listings, all of them charging significant amounts. One said the fee was 25 per cent of the compensation plus VAT, plus £25 a person.’

Harriet went on to the easyJet website and found out how to claim. She says: ‘I completed an online form in five minutes and the airline quickly confirmed we were eligible for €1,000, to be paid within seven to 14 days.

‘My only complaint is that easyJet did not inform us about this on the plane. Many people will have been taken in by the claims agents. Others probably do not even know they are due compensation.’

A spokeswoman for the airline says: ‘EasyJet takes its EU261 responsibilities extremely seriously, including providing advice on how to claim by issuing disruption leaflets at the airport and information through our flight tracker app.

‘We always pay compensation when it is due and continue to make it easier and quicker for customers to claim.

‘Customers can apply for compensation using a simple web form easily found on our website and we pay tens of millions of pounds in compensation and welfare payments each year.’

She adds: ‘It is concerning to hear that customers are being approached by claims agencies in the airport. We recommend customers apply directly to us so they don’t lose a proportion of their compensation to fees.’

A spokesperson for Palma Airport says: ‘The business of the airport is regulated and this practice is forbidden.

‘When airport staff detect these people, they are taken out of the restricted area.’

However, airlines do not have to pay out if the delay is due to ‘extraordinary circumstances’, such as dangerous weather conditions, air traffic control delays, industrial action or sabotage of the plane. Technical faults used to be a valid excuse for airlines, but court cases led to a change, and delays for this reason must now be compensated.

European courts recently ruled that if passengers are delayed for more than three hours as a result of a connection delay on an EU airline, they can claim compensation even if the delay occurred on the part of the journey that is outside the EU.

Claims can be made for up to six years after the event.

To avoid missing out on full compensation either make a claim direct to the airline or use a free service such as Resolver.

If a claim is rejected, it is possible to take the case further through an airline or airport dispute resolution service. Find details of the relevant service at the Civil Aviation Authority at caa.co.uk.

For complicated claims consider a specialist lawyer. One firm with a good track record is Bott & Co. If it wins the case the fee is 30 per cent of the compensation plus £25 a person. Alternatively, there is the small claims court. Make a claim using the Government online court Money Claim Online.

NOT EVERYONE IS EQUAL

Holidaymakers travelling with a non-EU airline flying from a non-EU destination (such as with United Airlines from Orlando) do not enjoy the same support. The airline is not legally obliged to offer any cash sums for such delays.

But check an airline’s own conditions of carriage as it may have arrangements for compensation.

Travellers hoping to claim for delays on their holiday insurance may be disappointed at the derisory sums offered.

Fiona Macrae of website Travel Insurance Explained says: ‘You’ll find most policies only pay £10 or £25 for each 12-hour delay. Some better policies pay up to £100 a person covered for a six-hour delay.’

You may also find that the bill for an extra night’s accommodation or extra day’s car hire is not covered. She adds: ‘If you want these kind of losses covered you have to find a policy covering delays that are ‘beyond your reasonable control’.’

For trickier cases try a lawyer

While most claims should be straightforward, they can be more difficult when airlines blame delays as circumstances beyond their control.

Charles and Setsuko Rix lost a day of their two-week holiday to Japan in May after British Airways cancelled their flight less than 24 hours before departure – with the replacement flight the next day also delayed.

But BA offered no compensation, blaming ‘extraordinary circumstances’, which exempt it under EU law. The couple were victims of an ongoing problem with turbine blades on the 787 Dreamliner aircraft, pictured, which required extra checks.

BA says: ‘We wrote to Mr Rix to say that this flight was partly delayed by the engine manufacturing issue, which, like other airlines, means we must make additional inspections – and which is beyond our control. We always meet our obligations under European law.’

Charles, a London taxi driver, says: ‘Luckily I checked my emails otherwise I wouldn’t have known about the cancelled flight until arriving at the airport. I had to go home in order to confirm the rebooked seats. I lost a day’s earnings.’

Specialist flight delay lawyers Bott & Co believe Charles may have a case. The firm says: ‘The fault has been publicised for a long time. In our view this passenger should receive compensation.’