How to avoid credit card traps that could cost you dear

Most people would say that they aim to repay their credit card at the end of each month – or at least before interest bites at the end of an 0 per cent balance transfer or purchase promotion.

The reality, however, is that 55.6 per cent of us end up paying interest on our balances, according to UK Finance figures.

At the same time, worryingly, credit cards are getting more expensive. Attractive deals are drying up, 0 per cent terms are shortening and interest is on the up. 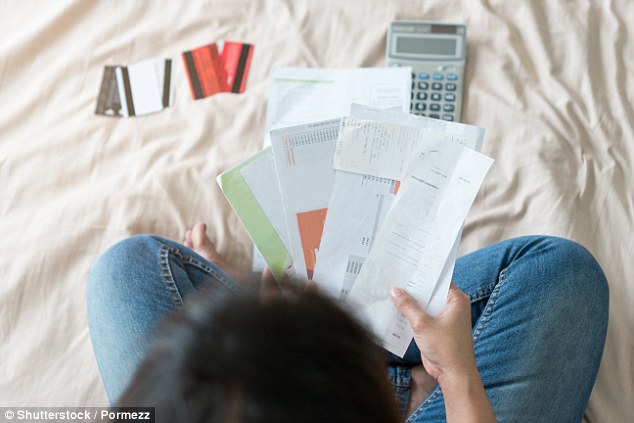 Dealing with debt: Credit cards can be a useful tool and a tricky trap

Credit card providers are likely to gladly pass on the latest Bank of England rate rise and be keen to push more hikes on to customers.

Figures from The Money Charity suggest the average credit card has a balance of £2,613.

At the average APR rate, that means borrowers are handing over as much as £343 in interest a year.

And with interest rates heading up, the cost of getting snared in the credit card traps sting that much harder.

So here’s our top rules to live by to make sure you avoid eye-watering interest charges.

1. Don’t get caught out by the base rate

The Bank of England recently upped the base rate to 0.75 per cent – a nine-year high.

Some banks, including Halifax, Lloyds and Barclaycard, TSB, link credit card costs to interest rates and the rest may inch up APR rates anyway.

Others, such as MBNA, Tesco Bank and Virgin Money, don’t.

However that doesn’t mean they won’t push up rates anyway in the coming months, says Andrew Hagger of Moneycomms.

He explains: ‘Rather than a blanket 0.25 per cent increase across the board these providers are more likely to review existing customer accounts and adjust rates as part of a wider review of account activity and perceived customer risk.

‘Sometimes card providers may not act on a single Bank of England 0.25 per cent hike, but as this is the second increase in 10 months customers shouldn’t be surprised if they see their borrowing rates increase.’

He says, a quarter of a percent increase may not seem much, but it could cost borrowers a combined £92.25 million.

Rachel Springall, finance expert at Moneyfacts.co.uk, predicts that rates will begin to trickle higher next month.

She says: ‘The base rate rise can affect the interest charged on credit cards but it may not be an immediate impact, we are more likely to see damage a month or so after any rate rise or if there was scrutiny thrown into the market over consumer debt.

‘Borrowers would be wise to keep a close eye on their statements to make sure they aware of any rate rise in the meantime.’

Interest-free deals are both a huge money saver and an expensive trap.

If you have a big balance sitting on your credit card clocking up interest, a specialist balance transfer card can be a great tool to help you pay off your debts more quickly.

These cards waive interest on balances for new customers for a small fee when they move over a balance from a an existing credit card.

Currently customers can bag up to three years 0 per cent interest on transferred debt.

While most charge about 2-3 per cent to make the transfer, the cost of this is far less than the interest you would incur on a standard credit card.

The interest-free deal then allows you to concentrate all of your repayments on clearing the debts.

Alternatively a 0 per cent interest term on purchases allows you to spend on your card without interest charges, these deals currently reach 28 months.

But you need to remember credit card companies don’t offer these deals for your benefit – they do it so they can profit from those who slip into paying interest at the end – and there are some major pitfalls.

Most importantly, they lull you into a false sense of security.

It’s easy to lose track of the end date, but it can be a nasty shock if it rolls round quicker than expected.

Borrowers will find that suddenly the balance left on their card begins clocking up eye-watering interest. 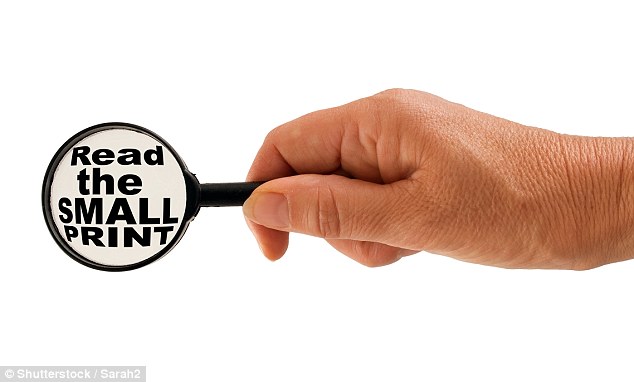 Easy to miss: Lenders bury important facts about how your debt is managed in the small print

3. Balance transfer cards are the trickiest

The temptation to spend on a credit card is huge, and banks capitalise hugely on this.

Even if you have a 0 per cent interest deal on balance transfers, spending on the card will clock up interest as normal.

This of course means your balance is harder to clear. Your repayments are then prioritised to go towards your most expensive debt, your purchases.

Often they will provide a short 0 per cent interest deal too – say for three to six months – to tempt you into a spending habit.

There are some cards that match longer term 0 per cent interest deals on spending and balance transfers.

This is a good compromise, but the best way to avoid any issues is to leave your balance transfer card at home so you can’t load up on more debt.

If you need a card to pay for a large purchase, taking out a separate card with a 0 per cent deal on spending will be cost much less.

But you will need to be careful as it is an extra card to manage.

Pesky small print could cost you

When you sign up for a balance transfer or purchase card watch out for the terms and conditions.

Most will apply restrictions on when transfers or purchases need to be made to be eligible for their 0 per cent deals.

For example, most balance transfer cards give between one and three months for you to shift your debt after you sign up – if you don’t do it in time you won’t get the 0 per cent deal.

Some also increase the transfer fees outside of this time frame.

Finally the terms and conditions of these promotional deals often specify that they apply from account opening, not when you receive your card or activate it ready to us

4. But if you do need one, act now, before they disappear

Over the past year the average balance transfer credit card term has shifted from a ridiculous 42 months to 36 months.

Purchase terms reached record lengths of 36 months but they now sit at just 30.

Alongside some lenders are withdrawing whole brands or halting applications to their cards.

Currently Virgin Money has stopped applications to three of it’s credit cards and Tesco Bank made a similar move earlier in the years.

MBNA’s off-shoot, Nuba, was scrapped altogether this year and the AA got rid of it’s whole line up in April, according to credit reporting service, Clearscore.

Sarah Megginson, business development manager at ClearScore, said: ‘The longer you wait to take action, the less likely you are get a good deal.

‘If you already have a credit card, look at switching now before the available deals decrease further, moving to a card that still offers a fixed 0 per cent balance transfer period or a low balance transfer fee.

‘It’s also important to check when any introductory offers on credit cards and mortgages end, so you can take action before you drift onto the lenders standard rate, which is often much higher.’ 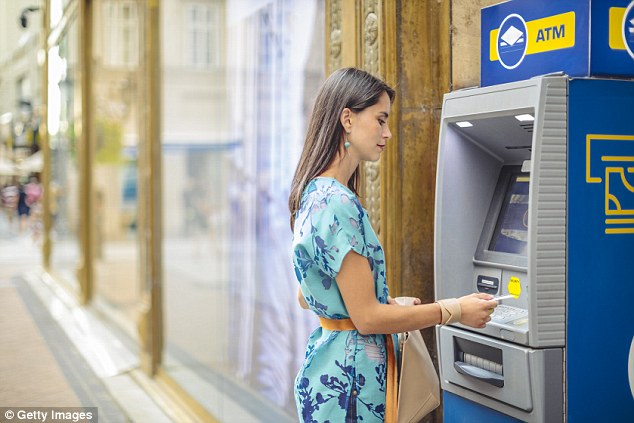 Think twice: Using your credit card to withdraw cash will cost you twice over

5. Never use your credit card at an ATM

It’s not just APR rates that are climbing, lenders have pushed up the cost of using your credit card to withdraw money from an ATM from 3.08 per cent at the start of the year to 3.15 per cent.

This is one of the most expensive ways to use your credit card already, with most lenders applying higher interest to amounts withdrawn as well.

For example, withdraw cash on the market-leading 0 per cent purchase credit card from Sainsbury’s Bank and you will pay a rate of up to 28.95 per cent interest on cash advances on top of a 3 per cent fee.

Do this a couple of times and you can quickly push up the cost of your borrowing.

Remember, ‘cash advances’ don’t just mean taking out money from an ATM – your credit card provider may also apply the same fees if you use your card to buy travel money, pay bills or even buy gift vouchers according to the Money Advice Service.

6. Don’t get stuck on the minimum payment train

If you have an expensive month it’s easy to give yourself an excuse and only pay the minimum payment required by your credit card provider.

As mentioned above, more than half of borrowers are guilty of this with a balance sitting on their cards clocking up interest.

Minimum payments are typically set at about 3 per cent of your balance, or a flat rate of £5, whichever is the higher of the two.

But let this become a habit and it can take years to clear your balance.

Take the average household debt – £2,613 – if your minimum payment is set at 3 per cent of your debt and your interest is set at the average 23.4 per cent it would take 13 years to repay your balance completely. 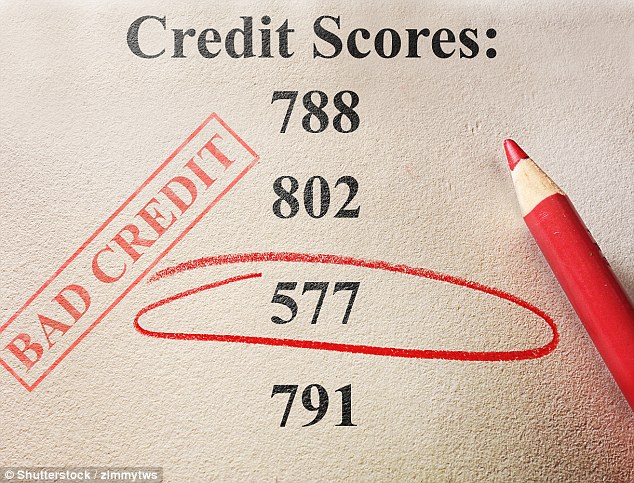 Bad bet: If you get a mark on your credit file for missing a credit card payment lenders will view your applications less favourably

7. The mistake that will follow you for six years

The number one rule when you have a credit card – set up a direct debit as soon as you get your card.

If you don’t, and you forget to pay or pay late, the penalties are serious and far reaching and can leave a mark that lasts for six years on your credit file.

Other lenders will see this when you next come to apply for credit and it can make you look like a risky bet to lend to in the future.

If that wasn’t reason enough, lenders slap you with charges of £12 a pop, and potentially the most expensive penalty. If you don’t pay it, the penalty also clocks up interest.

But the real kick in the teeth, they will also whip away any 0 per cent promotion you have too.

If you have utilised your card’s interest-free term for an expensive family holiday or a big home improvement then this could leave you in a sticky situation.