How to get cheaper motoring for young drivers as costs hit nearly £2,400 for first year of driving

Many youngsters find it difficult to afford running a car. The latest figures show that on average, a 17 to 24-year-old driver now pays nearly £2,400 to run a car in their first year of driving, of which more than half will be insurance costs.

Here, The Mail on Sunday looks at how young motorists can drive down the cost of insurance cover and examines moves to make driving for youngsters more affordable. 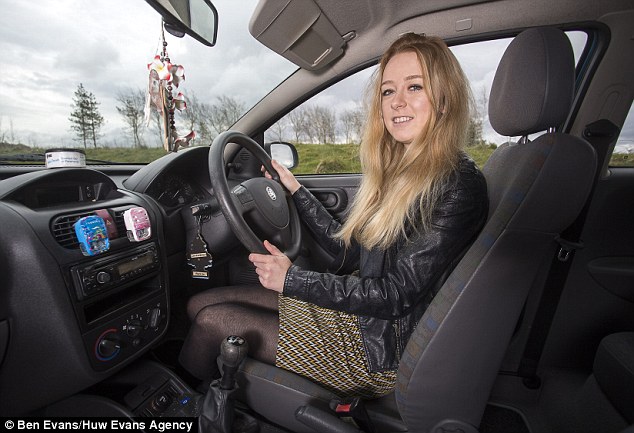 Safe: Charlotte Raymond has benefited from the black box technology

Telematics technology, which allows insurance companies to monitor driving behaviour, is helping many young motorists manage their insurance bills. With a ‘black box’ telematics policy, a smartphone-sized box is installed out of sight inside a car.

It works like a sat-nav or GPS, but monitors how a motorist drives by recording – and assessing – their speed, acceleration, braking, the time of day they drive and how they manoeuvre around corners.

Graeme Trudgill, of the British Insurance Brokers’ Association, says: ‘Putting a telematics black box in a car to monitor driving can reduce premiums for younger motorists by up to a quarter. It also reduces accidents three-fold in the first year of driving.’

One person to benefit from telematics technology is 21-year-old Charlotte Raymond, from Llanelli, Carmarthenshire. She has had cover with Co-op via its Young Driver Black Box telematics policy since she was 17.

As a result of driving safely since taking out her insurance, she has managed to reduce her annual premium from £1,012 in 2014 to just £440 this year.

She says: ‘When I got my car four years ago – a Vauxhall Corsa which I am still driving today – I compared insurers and Co-op’s black box offering made the most sense financially. Insurance costs for young drivers are extremely high, but the quote I got back from Co-op was considerably lower than those from other insurers.’

Charlotte had a black box installed after passing her test.

She adds: ‘There are restrictions – such as not being able to go out in my car between 11 o’clock at night and six o’clock in the morning – but I do not feel too hindered by this curfew.

‘My driving also gets monitored and scored on a number of factors – speeding, cornering, braking and acceleration. But I do not mind this as it keeps me safe and means I ultimately save money on my insurance if I drive safely.

‘My premiums have more than halved in four years. Meanwhile a lot of my friends are still paying premiums running into thousands of pounds a year.’

As a doctor, a car is a necessity and NOT a luxury – it should be made more affordable

A car is integral to the work of junior doctor Robyn Lewis. But she finds that the cost of owning, running and insuring her Vauxhall Corsa is a big burden on her finances.

The 24-year-old, from Ealing, West London, has just graduated from medical school and is about to take up a more permanent post at a hospital in West London. 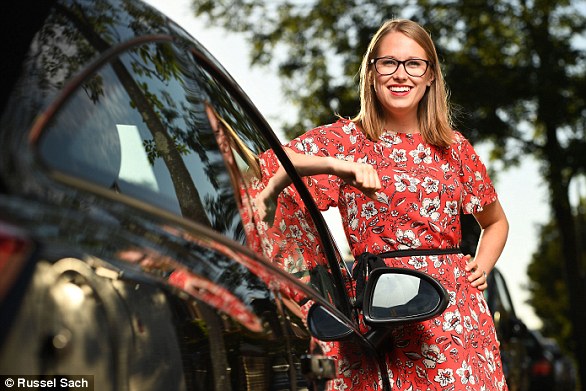 She says: ‘During my studies, I needed my car to drive to hospitals in London and across the South East.

‘For around five months I was spending as much as two-and-a-half hours a day in my car. I could have used public transport, but that would have meant spending even longer commuting.’

Robyn estimates she spends around £200 a month on petrol. She also pays £20 a month for a servicing plan which covers the cost of repairs – plus road tax, a resident parking permit and occasional parking fees at hospitals.

While all of these costs mount up, the biggest motoring expense remains her car insurance.

She says: ‘When I first passed my driving test, I paid around £1,400 for insurance. I have been driving for several years and am still paying a huge £800 for my current policy.

‘With insurance costing this much, it is really hard for young drivers to be able to afford to keep a car on the road. I would support a call for the Chancellor of the Exchequer to scrap – or at least reduce – insurance premium tax for young motorists.

‘I think the Government should be taking steps to make driving more affordable for people like me. In my work, a car is a necessity, not a luxury.’

She says: ‘I do not have my car with me in Cardiff, but go home frequently during term time – as well as during the holidays – and use it for local journeys. I now feel a lot more confident about my driving.’

Charlotte is one of Co-op’s ‘ten safest young drivers.’ Overall, these ten drivers have seen their annual premiums decrease by an average of £382 since taking out their insurance.

Findings from the Co-op show that since 2015 the proportion of overall claims per year attributed to drivers aged 17 to 24 has decreased by a fifth as a result of the widespread use of ‘black box’ telematics data.

Steve Kerrigan, of the Co-op, says: ‘While statistics highlight that young drivers are involved in a quarter of all accidents on the roads, it is really encouraging to see that telematics, together with our own training modules, is continuing to have such a positive impact on the safety of young drivers.

‘The financial incentive offered for using telematics has helped result in a 21 per cent reduction in incidents among this age group.’

Since launching its Young Driver proposition in 2011, the firm has ‘given back’ £12.6 million to young motorists – an average of £117 per policy.

Mike Bristow from road safety charity Brake adds: ‘The reported reduction in claims for young drivers shows telematics has an important role to play in promoting safe driver behaviour and is welcomed.

‘The data shows young drivers do respond to black box systems which discourage them from slipping into dangerous habits behind the wheel.’

Some campaigners are calling on the Government to reduce or abolish insurance premium tax for younger motorists to help make driving more affordable.

This tax works in a similar way to VAT in that it is added to the price of insurance policies – at a rate of 12 per cent.

‘But some believe it could be pushed up to as much as 20 per cent by the end of the decade, especially given the need to fund extra spending in the National Health Service.

Research from website Comparethemarket shows that four out of five young drivers do not know what the current rate of insurance premium tax is, despite it adding an average £161 to their annual insurance bill.

Simon McCulloch, a director of the website, says: ‘We urge the Government to introduce a cap on insurance premium tax for drivers under 25 – or remove it altogether.

‘Our research shows that 61 per cent of young motorists do not think the Government is doing enough to make driving affordable for them.’

Further findings show more than two thirds of young drivers rely on their car as part of their commute to work, school or university.

More than a quarter fear that if they could no longer afford to drive then they would risk losing their job.

McCulloch adds: ‘Failing to introduce a limit on insurance premium tax will make it harder for many youngsters, a key segment of the workforce, to get to their place of employment.’

Earlier this year, the Government said it would look at introducing graduated driving licences in an attempt to curb the number of young drivers killed on the roads.

This would mean those who had recently passed their test would face limitations, such as restrictions on night driving and on the number of passengers they can carry.

Mike Bristow from road safety charity Brake, says: ‘We need to look at telematics, along with graduated licences, to improve driving standards among young motorists.’

But some are concerned that such a move could make driving more difficult for young people.

Simon McCulloch says: ‘It needs to be balanced against a restriction in freedom to drive at night. Imposing conditions on new motorists could reduce the number who learn to drive.’

Tips to cut the costs of your insurance