Spring will soon be upon us – and it is already time to start planting seeds if you want an early summer crop of free groceries.

Here, The Mail on Sunday helps you draw up that grow-your-own shopping list.

Get adventurous with tomatoes

You can start growing tomatoes on your windowsill or in a greenhouse right now. Spend £2 on a packet of a dozen or so seeds and you will recoup that initial investment each time you pick some for a meal. 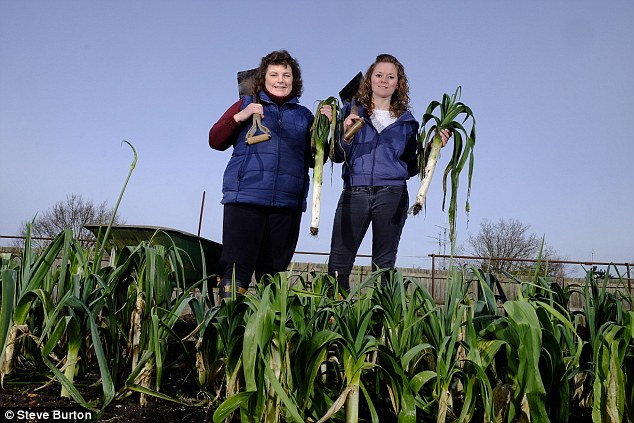 Plumb’s the word: Sherie Plumb, pictured with her daughter Emily, says it’s important to make the most of your seed trays and propagators – and any spare space on kitchen windowsills

With a single plant yielding up to 13 kilos of fruit in a season it can save you £30 – and the prospect of tastier treats than the watered-down excuses often found in the supermarket.

David Tostevin owns specialist seed shop Plants of Distinction in Framsden, Suffolk. He says: ‘You can sow now if you want to enjoy a decent crop in June.’

The 84-year-old grower adds: ‘In supermarkets it is all about presentation – making tomatoes look good. But when you bite into them you will often find they taste more of water than anything else. When you grow your own, it is all about flavour.’

The most popular varieties include the sweet-flavoured Sungold, the traditional Gardener’s Delight, the early maturing Shirley, plus Alicante and, appropriately, Moneymaker.

Although Tostevin appreciates the appeal of these, he says specialists sell more than a hundred varieties. He says: ‘People often go for a traditional red but you should take a chance with a variety you will not find in the shops. Black and deep reds are increasingly popular.’ 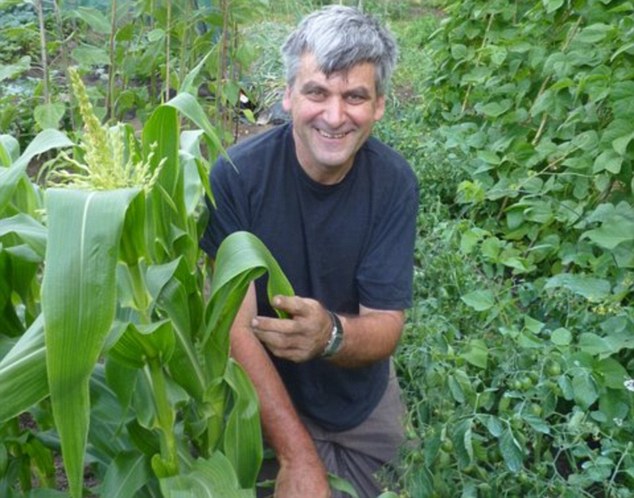 Guy Barter, chief horticulturalist at the Royal Horticultural Society, agrees now is a good time to plant seeds. He believes investing £20 in a heated propagator or heat mat will provide early help. He says: ‘A heated propagator ensures the soil temperature remains ideal for growing – and ensures seedlings within ten days rather than three weeks.’

It’s time to get out those seed trays and don’t forget the greens!

Easy vegetables to grow in early spring include carrots and parsnips.

Carrot seeds are often not planted in the garden until May but can now be started in containers if protected from the worst of the weather in a greenhouse, conservatory or sunny porch.

Gardener Sherie Plumb says: ‘Make the most of your seed trays and propagators – and any spare space on kitchen windowsills and in the greenhouse. You can also plant seeds for beetroot, cabbage, courgettes and marrows if indoors.’

Other favourites – such as peas, runner beans and herbs – will also thrive if now started in seed trays. These plants must be well watered and given sufficient root space for them to grow. If they are cramped they might wilt.

Growing advice – also available on a phone app – can be found at the Royal Horticultural Society website.

Another source of free guidance is the National Society of Allotment & Leisure Gardeners. The National Vegetable Society also provides some useful help.

He adds: ‘Shallow seed trays are ideal in a propagator and use feed compost. You might also wish to cover the seeds with a layer of vermiculite – a natural mineral that retains water and helps germination.’

When the leaves are sprouting – from perhaps three weeks – you can then transplant them to three-inch pots. When it looks like the plant is starting to develop flowers you can re-pot one final time into a 12-inch or wider pot or a tomato grow bag – in a greenhouse or outside in a sunny and sheltered location.

Add spice with peppers and chillies

Peppers are popular and versatile – fruity, sweet or hot. They can be eaten raw with salad or used to spice up a cooked meal. Just like the tomato, peppers can now be planted as seeds on a windowsill or in a greenhouse. A heated propagator will offer support, warming soil to 18ºC – and tricking seeds into thinking spring has arrived early.

Barter says: ‘Growing peppers uses the same skills and tools as tomatoes – and is almost as popular.’

Once leaves are showing, you can move the plant into a three-inch pot and then one final re-potting into a 12-inch container. Among popular varieties are Gypsy, Red Cayenne, Madame Jeanette, Bulgarian Carrot, Ohnivec and Fatalii. Others favoured for fried dishes include Padron, Lombardo and Jimmy Nardello.

At the end of the season anything not eaten can be used to make pickles and sauces. Chillies left to shrivel on the plant can then be picked, dried in an airing cupboard and used as flakes in cooking.

Save on shopping with lettuce

Perhaps the most cost effective grow-your-own plant is a lettuce. A packet of a hundred seeds can cost as little as £1, a penny a lettuce. This is a cost you should bear in mind the next time you are in the supermarket holding a bag of fancy salad leaves in your hand priced at £1.50. 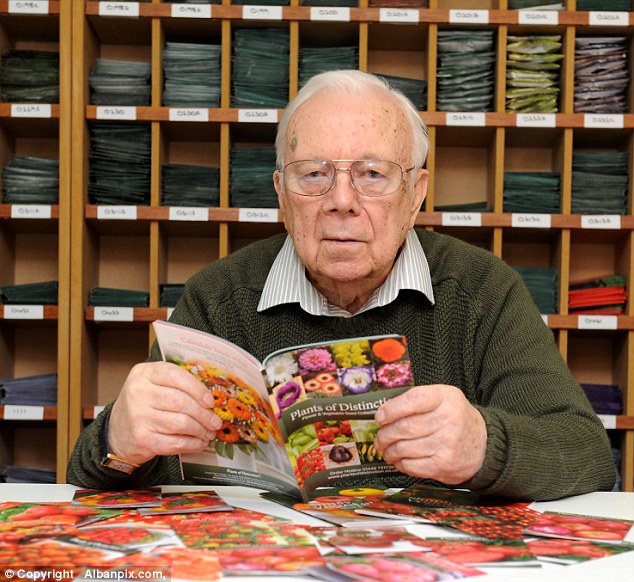 Lettuce seeds planted now will need protection against the cold – so any seed tray should be kept indoors or in a greenhouse. Later this month, if the weather is kind you can sow outdoors but only if using cloches (transparent plastic or glass covers), plastic tunnels or horticultural fleeces. These help protect against frost.

Those grown from seeds sown indoors now can be transplanted outside in about a month – but again some form of transparent cover is recommended to support growth.

Unfortunately, foes such as slugs and snails are not easy to combat. If you do not like the idea of slug pellets – which can harm slug predators such as slow worms, hedgehogs and carob beetles – you could use copper as slugs do not like to crawl over this metal. Pennies around a seedling might do the trick or stripped electric cable.

Lettuces come in many varieties. Suppliers such as Plants of Distinction will offer multi-leaf mixes of seeds that once grown can be cut to create an instant fancy ‘salad bag’ that is far tastier than anything found in the supermarket. There is also no need to settle for a boring salad with varieties available such as Xanadu, Mascara, Mottistone, Red Romaine and Little Gem Intred. 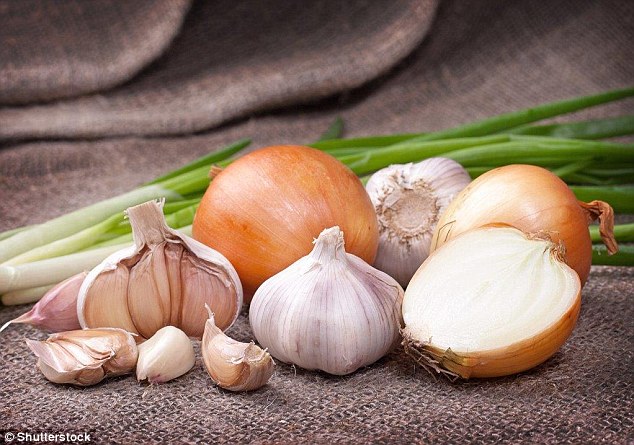 One of the most versatile early crops you can grow is the onion – along with its close relatives, the shallot and garlic. You can sow onion from seed now

Relish the aroma of garlic and onion

One of the most versatile early crops you can grow is the onion – along with its close relatives, the shallot and garlic. You can sow onion from seed now but most gardeners prefer ‘sets’ – small bulbs.

It is a relatively hardy plant and can be planted outside now. They like sunshine and well-drained soil and netting is a good idea as it is not just humans who like them – birds and insects do too. If you plant the seeds or sets now you should be able to enjoy the fruits of your labour from late June.

Sherie Plumb, 60, from Althorne, Essex, is one of the country’s most successful onion growers – having won numerous awards as a member of the National Vegetable Society. She says: ‘I have already started planting onions in trays – but I have protected them from the elements by keeping them in the greenhouse. I grow varieties Tough Ball and Santero.’

Other onion favourites include Setton, Sturon and Hercules. If you want to add some variety, try Doux des Cevennes, Red Baron, Lilia, Red Pearl, Elista and Apache. Prisma and Zebrune are excellent shallots for flavouring dishes. Tochliavri is one of the most versatile garlic plants while chives can provide a salad with an extra kick.

Savour the taste of potato varieties

Brought back to Britain from North America by Sir Walter Raleigh in 1586, the potato is now a food staple.

Planting ‘first earlies’ does not usually begin until the end of this month. But you can get a head start by getting them to shoot before they are even planted – through a process called ‘chitting’.

This involves putting your plant seed tubers in a suitable container – such as an old egg box – inside the home by a cool well-lit windowsill. After a while buds will appear and once about half an inch long you should consider planting. As an early season crop they will benefit from being put into a large tub or plant bag rather than straight into the garden.

Sherie Plumb, along with eldest daughter Emily, 26, have already started chitting tubers. She says: ‘They are currently upstairs on top of a cupboard – and later this month will get put into large grow bags and moved to the greenhouse. They will eventually go outside but it all depends on the weather. Perhaps April or May.’

Do not expect your early potatoes until late June when plants start to flower. Sherie adds: ‘Do not just blame yourself if you have a bad crop. It can often be a result of the quality of the seed.