HSBC has launched a new app that allows customers to see accounts from up to 21 different banks on one screen.

Connected Money has been launched after the banking giant trialled the app with 10,000 customers from September when the project was labelled HSBC Beta.

It will allow users to see – though not manage – current accounts as well as online savings accounts, mortgages, loans and cards held across several banks in one app, as long as they have an HSBC current account. 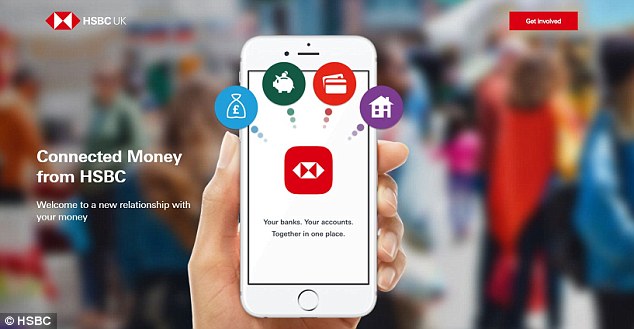 Connected Money: The new app will allow HSBC customers to put all their different accounts – even from rival banks – into one place

However, many will be worried about handing over account details and passwords to the app, even if it has been created by a trusted global brand such as HSBC.

After all, one of the key messages from banks is to never hand out account details or passwords.

On its website, it says ‘as always, your security is our top priority. With Connected Money you can expect the same high level of security you already experience with HSBC.’

This is Money has asked if HSBC would be liable if an account – or accounts – were compromised by the app.

HSBC told This is Money: ‘Entering your bank details, potentially for a number of accounts, may make you feel a bit uneasy at first, but it is safe and secure.

‘The app uses bank level encryption and security to protect you and your financial details.

‘The app links you to the other banks mobile banking where you will be prompted to enter your log in details.

‘Each bank has a unique log on flow – this will usually match the online banking log on flow.

‘Over the past few years HSBC has implemented many new measures to better protect our customers against financial crime and are continually investing to further enhance our controls and defence.

‘If accounts are compromised this is covered off in the terms and conditions. It is dependent on circumstances, but ultimately if it is our fault, we are liable.

‘It is very important that if a customer uses a Third Party Provider they must continue to tell us about any payments on their account that they think may be incorrect or unauthorised.

‘We will continue to assess all disputed payments on their own facts and in accordance with the Payment Services Regulations 2017.’

It claims the app will make it easier for users to get a complete overview of their money.

Security: On the Connected Money website, it says customers can expect ‘high level of security’

Tools in the app to help people manage their money include a spend analysis feature, helping people see their spending across categories and keeping track of spending habits.

There is also a bills calendar to help people see what payments are coming up next and a ‘balance after bills’ feature so users can see how much money they will have left until payday when their standing orders and direct debits have been taken out.

Additional features HSBC is working on include one which rounds up debit card purchases to the nearest pound and transfers the change from an HSBC current account into an HSBC savings account.

In future, the app will also nudge people with savings suggestions based on their spending habits.

The app is available to HSBC UK current account customers using iOS 10 and above via the App Store, with an android version launching later in the year.

Becky Moffat, head of personal banking and advance, said: ‘From testing this technology with customers we found that it gave them a sense of better control and financial confidence.

‘HSBC is committed to building financial capability as a central part of the customer experience. Connected Money, gives users the tools and information needed to manage their money with confidence.’

This is Money attended the launch event of HSBC Beta in London back in September – and it comes after new Open Banking rules were introduced.

We saw the app demonstrated first hand as the banking giant looks to shed its legacy systems and keep up with glossy new start-up challengers who do not have the same IT baggage.

This is not a new concept and rivals that do this already include OnTrees and MoneyDashboard, but this is the first of its kind from a major bank such as HSBC.