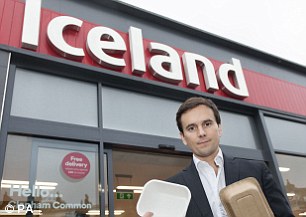 Iceland is to profit from retail rivals’ woes by snapping up stores for its Food Warehouse chain.

Richard Walker, managing director of the frozen food chain, said it had ‘active and aggressive’ plans for new stores.

It comes as competitors shut outlets and the prospective Sainsbury’s-Asda merger is expected to see both chains offload sites to appease the competition watchdog.

Iceland already has 66 Food Warehouse stores, which are cash-and-carry style and around three times the size of traditional Iceland outlets, and plans to add at least 30 a year.

‘Retailers are shedding space and we are looking at every one of those,’ Walker said.

He is also growing the Iceland chain, of around 870 UK stores, with a few extra a year, as well as expanding the 20-strong chain in Ireland to 50.

He said the group eked out a ‘bit of positive sales growth’ over its past financial year, with annual figures due in mid-June.