IN THE MONEY: DS Smith boss Miles Roberts trousers £4m despite having taken a pay cut 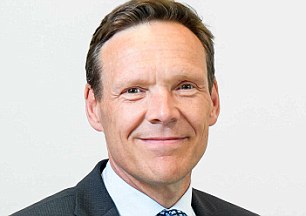 The chief executive of DS Smith saw his pay fall 16.8 per cent from £4.9million, according to the firm’s annual report.

Roberts has been in charge of the FTSE 100 company, which makes corrugated cardboard, since 2010.