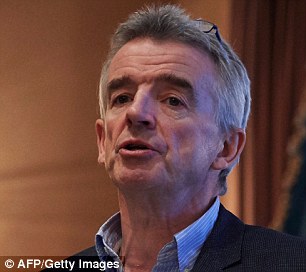 The budget carrier said Michael O’Leary had given up performance-related bonuses after half a million passengers were affected by cancellations in September.

The married father-of-four who lives in County Westmeath, Ireland was paid £2.9million a year earlier.

Travel chaos erupted last year after a ‘mess-up’ over annual leave left it short of pilots, meaning 400,000 passengers were stranded.