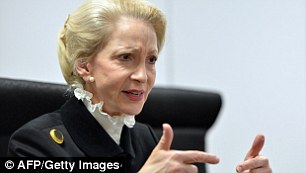 The institution was plunged into chaos last week after Lady Judge, 71, stepped down as chair to contest a host of allegations in the report including claims she made racist and sexist comments about staff – all strongly denied.

The Iod said: ‘Though the process has been painful, the IoD has followed necessary and proportionate procedure.’