Is my Gibraltar £1 Neanderthal skull coin rare and worth thousands?

I have found my old box full of interesting coins. I have been checking some online to find out if there is really any value of them.

However, it is so confusing since you find people listing those coins for really high prices on eBay, but I’m not sure if they really worth as much.

For instance, I have a £1 coin from Gibraltar which I found in my change a few years ago. It depicts the discovery of a Neanderthal skull on the island in 1848.

One recent article online says one sold for £5,000, another says £80,000, while there are plenty of listings for hundreds of pounds. Have a struck gold with this coin? N.A, via e-mail. 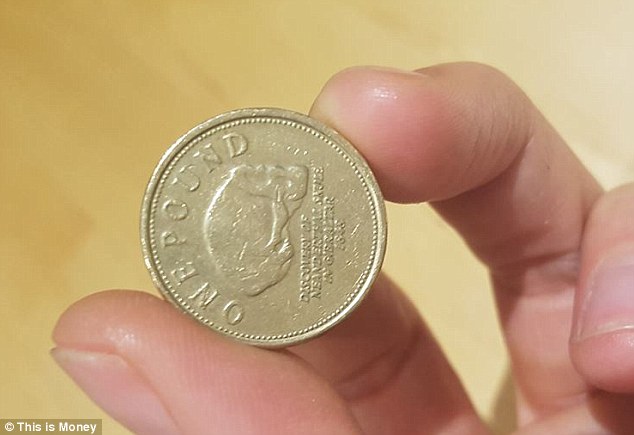 Skull coin: The round pound from Gibraltar has previously caused a stir online – but it is unlikely to be worth anywhere near the crazy amounts it is being listed for

Lee Boyce, consumer affairs editor at This is Money, replies: Like many of our readers, you sent me several pictures of coins that you believe could we worth far more than face value.

These include the WWF 50p coin, some of the Beatrix Potter 50p set and an old one penny coin from 1920.

The one that caught my eye was the £1 skull coin, which is legal tender in Gibraltar, but not in the UK. I hadn’t seen that coin before so it piqued my interest.

They previously could have turned up in your change as they are very similar to the old style round pounds that were replaced last year.

It has the skull on one side and the Queen on the other, with the words Elizabeth II – Queen of Gibraltar and the year 2012.

I had a quick search online and saw the articles you mention. Here at This is Money – and since I have been writing about the coin craze – we try to make sure we get an accurate as possible value on coins that can turn up in your change.

The first tell-tale sign that it is not worth much to collectors is the fact that I found quite a number of them online on eBay – including some listed for 99p, with no bids and the auction soon to expire.

This is unlike the Kew Gardens 50p for example.

As we pointed out last week, they are regularly being bid on and selling for around the £100 mark, thanks to their rarity.

On a Gibraltarian news website, it says that the skull coins are freely circulating on the island today, which indicates that are not particularly rare.

Some more research shows that the coins were minted between 2009-2013, but there are no official figures as to how many were made.

A spokesperson at Change Checker said of the coins being listed for huge sums: ‘This is a case of somebody chancing their arm, circulation quality coins of this design regularly sell for £2-£6 on eBay.’

Furthermore, having a look at the online marketplace, there are a number of coins listed for crazy prices. This is an attempt to trick people into buying it for an inflated price.

It goes to show once again that you have to have your wits about you when looking to buy or sell coins online – just because something is listed for a high price, doesn’t mean it will go for that or is worth what is being asked.

Got an unusual coin? Get in touch: editor@thisismoney.co.uk