Is my House of Fraser pension safe? Steve Webb replies 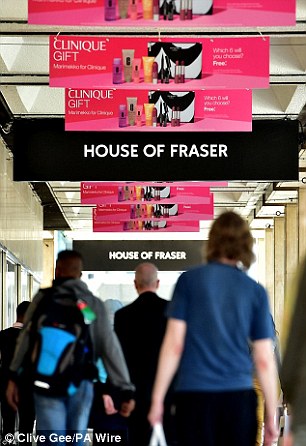 Going bust: House of Fraser was bought out of administration by Mike Ashley’s Sports Direct, but how will its pension scheme members be affected?

I am an ex-employee of House of Fraser and someone who took his final salary pension approximately 10 years ago.

It pays a modest monthly pension from the House of Fraser Pension Fund.

I am deeply troubled by the recent news concerning this once mighty department store group.

Can you advise me? What will happen to the pension fund? Will my pension be safe?

Steve Webb replies: When the news is full of stories about your former employer going into administration it is entirely understandable that you would be worried about what this means for your pension.

The good news is that there is a comprehensive ‘lifeboat’ scheme called the Pension Protection Fund which means that you should see very little change to your pension, though younger scheme members (those under scheme pension age) may see a bigger impact.

When a company goes bust and the pension fund is well short of the money needed to pay out all of the pension promises, it is usually transferred into the Pension Protection Fund (PPF).

This is basically a mandatory insurance arrangement where firms running salary-related company pensions pay in a levy each year and in return their scheme members are covered if the sponsoring employer goes out of business.

The level of compensation paid depends on your age when the firm went bust.

The main difference that you would see if the House of Fraser scheme ends up in the PPF is that future increases to protect against inflation may be lower.

Many pension schemes will pay you an annual increase to protect against inflation, and often this will cover your whole pension for all the time that you worked for the company.

PPF payments are also only linked to inflation as measured by the Consumer Price Index whereas many schemes still pay pensions linked to the generally higher Retail Prices Index.

Again, this may mean that any annual inflation increases you receive in future are lower than they would have been.

You can read more about the PPF and the protection it offers here.

In the specific case of the House of Fraser scheme there is however a slight twist which might mean that your pension is protected in a different way.

If you got either this benefit or Working Families Tax Credit at any time during those years, it counted towards your state pension and could give it a boost.

Steve Webb would like to hear from anyone who got these credits back then, whether you are already drawing a state pension or are yet to do so.

You can write to Steve at pensionquestions@thisismoney.co.uk and we will forward your messages.

According to the pensions press, the House of Fraser scheme was short of the money it would need to pay everyone’s pensions in full, but may have had more money than would be needed to match the benefits paid out by the PPF.

In that case, the scheme might not go into the PPF.

Instead, the money in the fund would be paid over to insurance companies who would provide guaranteed pensions at least as good – and in some cases better – than the PPF.

As a recipient of a pension you would not notice much difference, but your pension would be underwritten by an insurance company rather than the PPF.

Depending on how the balance in the House of Fraser pension scheme was allocated, it is possible that you would get a slightly better pension than from the PPF, but you will definitely not be any worse off than in the PPF.

At the moment, the House of Fraser scheme is going through something called an ‘assessment period’ where the PPF decides whether the scheme has enough money to pay benefits at least as good as PPF levels.

If it does not, then it will end up in the PPF. If it does have enough money then a deal will be done with an insurance company as described above.