Is the £59bn Brits have tied up in Europe safe? Political woes rock economies of Italy and Spain

The Italians may have finally got a government, but experts are warning investors to brace for fresh volatility in European stock markets.

The Italian stock market rose 1.5 per cent yesterday after the anti-establishment Five Star Movement and League parties agreed to form an administration.

Bonds also rallied, sending yields sharply lower, as investors breathed a sigh of relief that the country is not heading for a new election – at least not yet.

But with Mariano Rajoy becoming the first prime minister in Spain’s democratic history to be ousted by parliament after a vote of no confidence, Europe’s problems are far from over. 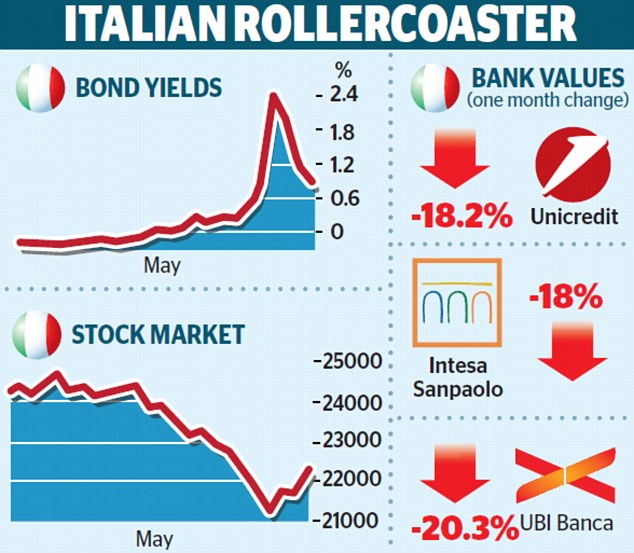 Jason Hollands, of fund supermarket Bestinvest, said: ‘I don’t think anyone can say Italy is out of the woods yet.

They have a populist government that has some radical spending plans and is keen to throw off the EU’s fiscal straitjacket.

Spain looks likely to form a new government and in Hungary you have a party that has a fundamentally different view on Europe to the establishment.

‘The markets are already skittish and I think we will see more volatility to come.’

Europe is popular with British investors, who have more than £59billion in funds backing continental firms. But investors, especially those who pick stocks for a living, are questioning whether it remains a good bet.

Mark Peden, manager of Kames Global Equity Income, said: ‘If you want an easy life, don’t invest in Italian assets for the next few months.’

Events such as the Italian crisis tend to weigh heavily on the share prices of all firms, good and bad.

But that can create opportunities for investors looking for bargains. However, it is essential that investors opt for quality firms that are insulated from politics and the economy, says Rory Powe, one of the UK’s top European stock pickers and manager of the Man GLG Continental European Growth fund.

He says: ‘It is more important than ever to stick to investing in companies of the highest quality where their fortunes rely little on economic growth and much more upon their own specific reasons for success.’

That means avoiding banks, which are heavily reliant on interest rates to make profits.

Other include real estate firms, whose success is largely tied to the health of the economy, and retailers, which perform well only when people feel flush.

Healthcare, consumer goods, industrial and technology firms are more insulated from economic pressures, Powe says. One of his favourites is SAP, the German software company which has more than 388,000 customers.

Many investors may feel avoiding Italy is the best idea in the current environment, but that may be overkill.

Powe, for example, holds the Italian luxury clothing brand Moncler and supercar maker Ferrari. These are international brands for whom Italy is a relatively small market, so they are not reliant on the strength of their home economy.

For savers who instead want to instead in Europe via a fund, Adrian Lowcock, of investor Architas, tips Jupiter European, which has turned £10,000 into £19,624 in five years.

German sportswear giant Adidas and budget airline Ryanair are among manager Alexander Darwall’s biggest picks, as well as some less familiar names to British investors, including Spanish IT group Amadeus.

Alister Hibbert, the fund’s manager, adapts his portfolio to the changing climate.

He likes firms that have higher earnings potential over the long-term, such as German tyre maker Continental, French plane builder Airbus and Denmark’s Danske Bank.