Is unloved gold a buy after price tumbles below $1,200? 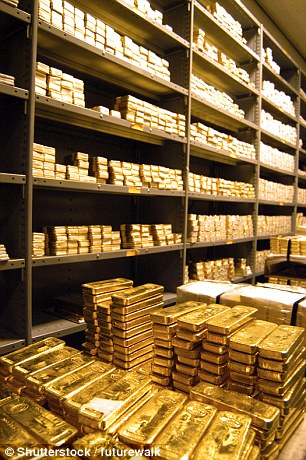 Buying opportunity? Investors are shunning gold, sending it to two-year lows below $1,200 an ounce

Investors are shunning gold, sending it to two-year lows below $1,200 an ounce despite a rocky period for world markets.

Financial pundits say the strong dollar is making it expensive, even for those who would normally favour it as a safe haven asset during upsets like the Turkey crisis.

Gold is off its recent low of $1,165 an ounce hit in mid-August. But it has only crept back up to around $1,200, in response to a slightly weaker dollar, over the past week.

So is gold currently unloved enough to represent a buying opportunity?

Some investing commentators believe it’s a good time to buy against market sentiment, which has seen heavy ‘shorting’, or bets against, the gold price of late.

A commodities expert suggests that it will stick at around $1,200 until the end of the year, before a bout of dollar weakness pushes it up to $1,350 by the end of 2019.

However, one asset manager – who dubs gold ‘a hedge against human stupidity’ – has dropped it from all but its most cautious portfolios.

This is Money rounds up the latest views on where the gold price might go next, and how future US interest rate and dollar moves could affect it. We also explain how to buy gold below.

Turkey crisis or anything that weakens dollar could trigger gold recovery

‘Normally, the best time to start researching – or even buying – an asset is when no-one else is, as that’s when the available price could be particularly attractive and therefore particularly rewarding. This might bring gold onto some investors’ radar,’ says Russ Mould, investment director at AJ Bell.

He notes recent gold price weakness might seem surprising, since it is seen by some as a haven in times of strife and could be a beneficiary of concerns over Turkey’s woes, but explains the strong dollar is a powerful force working against this outcome.

He adds: ‘Like most raw materials gold is priced in dollars, so if the greenback goes up then the precious metal becomes more expensive to buy in local-currency terms, potentially dampening demand.’ 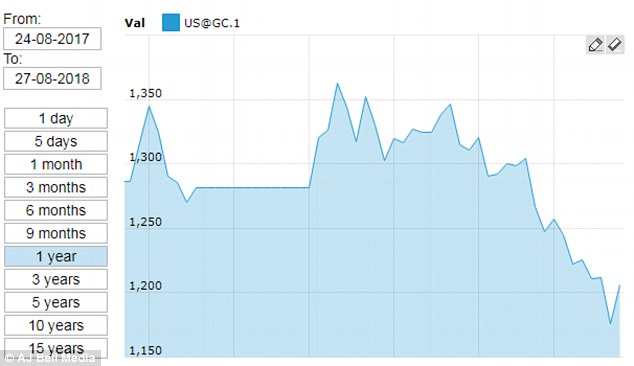 Market moves: How has gold price fared over the past year? (Source: AJ Bell Media)

In gold’s favour, he says ‘short’ futures contracts – bets against gold price gains – have doubled since a year ago and are at their highest going back at least 20 years.

‘Bears are clearly stomping on gold, with dollar strength as the most likely reason for doing so.

‘Fans of gold will therefore be arguing that all of the bears have piled in, given the huge number of short positions, leaving gold ripe for a snapback if the sceptics are put to flight. The question is what could be the trigger for that?’ 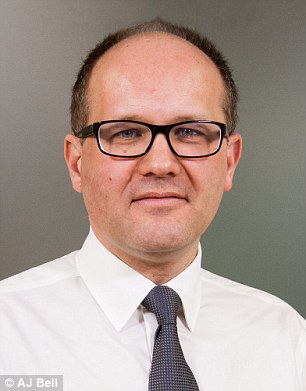 Mould says one trigger could be a worsening of the Turkey crisis.

This could still spread to emerging and financial markets more generally, and another would be any development that puts a lid on the dollar.

But he reckons if the Fed and other central banks find themselves obliged for any reason to halt the hiking cycle, or start cutting rates, or even crank up quantitative easing again, that would hit the dollar and gold may well thrive again.

The Fed is widely expected to raise rates in September and December, and if traders think the Fed is backing off for any reason, it’s worth watching that as a trigger point, says Mould.

‘I am not a gold “believer” or gold bug as they are called. I don’t believe it is a safe haven, money, an inflation hedge, a deflation hedge, or that it will magically bring about world peace,’ says Brian Dennehy, managing director of FundExpert.co.uk.

‘As a preamble on gold, we can say that gold and the US dollar have a tendency to move in opposite directions – not all of the time but most of the time.

‘Therefore, if the dollar appears to be at or near the end of an uptrend right now, with lots of optimism evident, we would not be surprised to find gold at the opposite end of the scale. And it is. Brian Dennehy: ‘I am not a gold ‘believer’ or gold bug as they are called’

‘There are no guarantees, but you aren’t often going to see a set-up as good as this to go against the prevailing trend and sentiment.’

Dennehy stresses that buying gold now would be a short-term, high risk punt, and you would need to stay close to event and price moves, and apply a stop-loss at the first sign of trouble.

He adds: ‘What might happen once gold has bounced and the dollar come off a bit? Let’s say that is a few months down the line.

‘My sense (I put it no more strongly, and it’s not a prediction) is that gold will roll over and continue in a long term bear market which began in 2011.

‘The US dollar will dust itself off and continue upwards.’

Dennehy says if you don’t already have stop losses in place or struggle with them, having a small holding in a fund that invests in gold mining companies, not gold itself, is an option – and might provide a better return.

Dennehy says they are all very heavily correlated over the last five years, with a touch of underperformance by the passive ETF.

Gold is perceived to be a safe haven asset but it hasn’t behaved much like one during the Turkey crisis, instead falling below $1,200 an ounce for the first time since January 2017, says Capital Economics commodities economist Simona Gambarini.

‘We don’t expect the price of gold to recover much during the rest of this year. However, we do think that it will rebound in 2019,’ she says.

‘A key explanation for the weakness of gold since the spring has been the broad-based strength of the dollar (albeit not against the yen). There tends to be an inverse relationship between commodities prices and the value of the US currency.

How do you buy gold?

Savers have a number of ways of buying gold as an investment, writes Simon Lambert.

Physical gold is the main way to tap direct into actual gold, by buying bullion or coins. This can either be done through a traditional dealer or through an online service such as GoldMadeSimple, or BullionVault. You can read more about how to do this on the World Gold Council’s website.

Exchange Traded Commodities are also a direct route into gold. ETCs, like Exchange Traded Funds, track a particular sector, or in this case commodity.

They are passive investments and should merely mirror gold’s moves, although some will offer leveraged returns or the opportunity to short the price. Make sure you understand the difference between ETCs that are physical (actually buying gold) and synthetic (set up to mimic its price). Read this guide to ETFs.

Funds enable investors to buy into a basket of shares of gold miners, producers and associated companies. However, the performance of individual firms does not always echo gold’s rises and falls, and in fact, gold mining shares can fare worse than the gold price – especially smaller companies.

Full guide: How to invest in gold.

‘But in the case of gold, this inverse relationship is even stronger as gold and the dollar can at times be considered substitutes.

‘This also helps to explain why gold has not tended to behave like a safe haven asset in the past during times of stress, when the dollar has appreciated at the same time.’

She points out that the price of gold fell by roughly 30 per cent during the global financial crisis when the dollar strengthened.

It only started rallying towards the end of 2008 after the Fed cut interest rates and embarked on quantitative easing, which caused the dollar to depreciate sharply.

Gambarini adds that in the Asian crisis of the late 1990s, investors fleeing developing countries did not seek safety in gold but in US Treasuries and the dollar, as the US economy was perceived to be safe.

She notes the gold price fell 22 per cent between the start of 1997 and the end of 1998, while the trade-weighted dollar – the greenback versus a bigger basket of currencies than the older dollar index – rose about seven per cent.

‘Typically, gold has only tended to be an effective safe-haven asset when the dollar has been weak.

‘So given our view that the dollar will remain strong into 2019, we don’t expect the price of gold to recover much ground before then,’ says Gambarini.

‘This is because we anticipate that the dollar will falter, as the Fed calls time on its rate hikes around the middle of the year in response to signs of a sharp slowdown in the US economy.

‘Gold just can’t get a break. Despite everything that’s happening – from trade wars to currency crises – the so-called “safe haven” yellow precious metal is finding no love whatsoever.

‘Market participants have favoured the likes of the Swiss franc and Japanese yen as their go-to safe haven plays rather than gold and silver.

‘This may be because of the fact the metals pay no interest and cost money to store, especially now at a time when some central banks are turning hawkish – inclined to raise interest rates – and bond yields are on the rise.’

Razaqzada says the dollar going up has made precious metals denominated in that currency even less appealing, but that euro, pound and Swiss franc-denominated gold prices have fallen too. 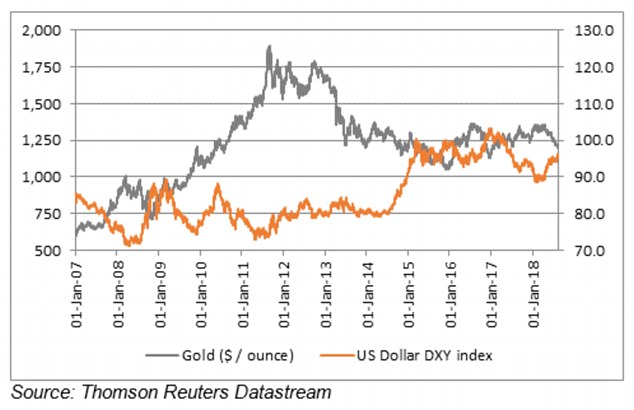 Dollar index and gold price: There tends to be an inverse relationship between the two (Source: Thomson Reuters Datastream/AJ Bell)

‘The only hope we see for gold in the near term is if these speculators now take profit on their short positions.

‘Also, should the stock market sell-off get too severe then surely at some point investors may have to ignore the impact of the dollar and re-consider gold for its traditional role as a safe haven asset.

‘But we think that the best chance for a comeback is if the dollar were to fall again.’

Gold is ‘a hedge against human stupidity’

Seven Investment Management says it has dropped gold from all but its most cautious multi-asset portfolios, and even there it has halved its exposure.

It has replaced gold with general commodities, such as those in the energy, agriculture and industrial sectors.

‘Gold can act in an unpredictable way often depending upon factors like the strength of sterling, the US dollar, Chinese interest rates or the Indian wedding season,’ says senior investment manager Peter Sleep.

‘Nevertheless, in very conservative portfolios, it can sit comfortably alongside an investor’s bond funds as a hedge against high inflation, should it come back again.