Mike Ashley has been accused of abusing the system after he bought bust department store House of Fraser in a controversial £90million deal that leaves 10,000 pension fund members in the lurch.

A row broke out last night over the fact that the Newcastle United owner’s bid was favoured over a higher ‘white knight’ offer from rival retail billionaire Philip Day that would have protected pensioners.

Administrators from accountancy firm EY could face a Government inquiry after selling the 169-year-old chain to Ashley in a deal that appears to put the interests of banks and bondholders ahead of workers’ retirement savings. 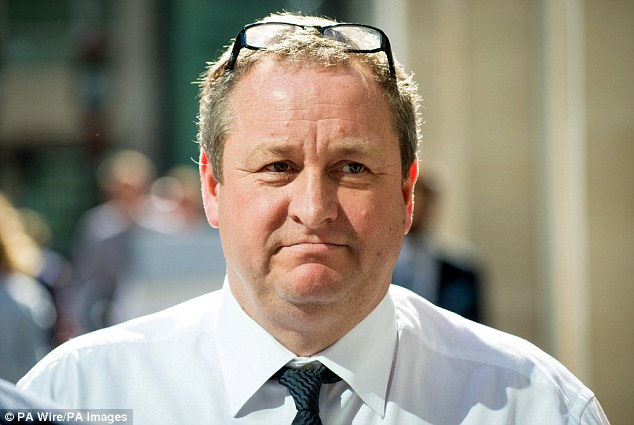 Day, who owns brands such as The Edinburgh Woollen Mill and Peacocks, made two bids for House of Fraser. The first was lodged on Thursday and the second, worth £100million, was tabled shortly after the retailer went into administration early on Friday.

Day also offered to shoulder House of Fraser’s pension obligations – but his proposals were rejected.

Ashley’s Sports Direct empire is taking on House of Fraser’s 59 UK stores, its stock and its brand name.

But the retirement savings of workers are heading for the Pension Protection Fund lifeboat scheme, where they face cuts of up to 10 per cent to their incomes. It is possible an insurance company could take on the scheme, but that may also involve reductions.

The scheme does not currently have a funding problem but without a parent company supporting it, experts say a black hole of around £160million would open up. 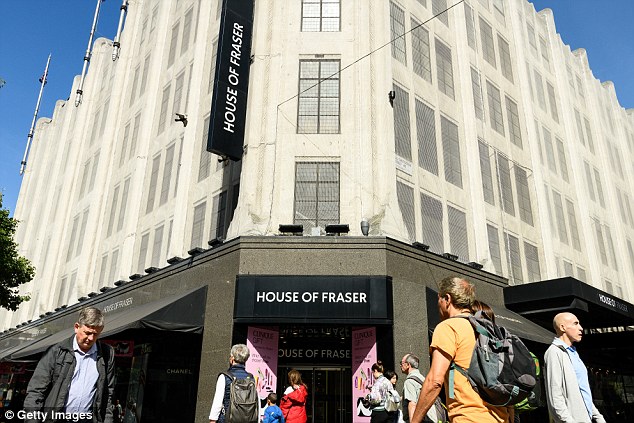 Ashley’s Sports Direct empire is taking on House of Fraser’s 59 UK stores, its stock and its brand name

Pensions expert John Ralfe said: ‘For those not yet retired pensions will be cut by up to 10 per cent, and everyone, including those already retired, will get less generous annual inflation increases each year.’

A spokesman for EY said Ashley’s offer was ‘the only deal on the table’ when it was appointed as administrator on Friday morning. But sources said Day’s offers had by that time been spurned at the behest of banks and bondholders who were owed money – probably because under his proposals, the pensioners would have come ahead of them in the queue for payment.

EY confirmed the Ashley deal was a ‘pre-pack insolvency’ – a controversial process where a buyer is lined up in advance, and purchasers can shed a company’s pensions liabilities. 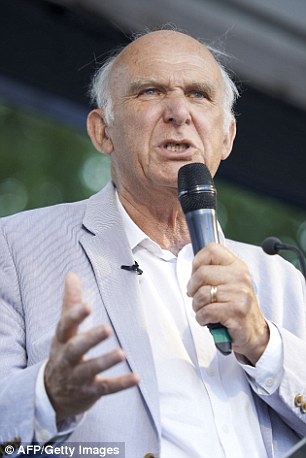 Sir Vince Cable, the Liberal Democrat leader, ordered an investigation into pre-packs while he was Business Secretary. He said Ashley’s deal ‘looks like an abuse of the pre-pack system’, and called for an inquiry.

He said: ‘There needs to be an investigation by the Department for Business leading to a change in the law. Until the pre-pack process is reformed, there are open goals for people to exploit.’

Ashley has promised to turn House of Fraser into the ‘Harrods of the High Street’. He is set for lengthy talks tomorrow as part of the handover.

Sports Direct would not comment on store closures or how many of House of Fraser’s 16,000 jobs will be lost. It is likely Ashley will want to turn some stores into Sports Direct and Flannels, a fashion chain he owns.

Sports Direct is also expected to renegotiate leases on stores, some of which are longer than 40 years. That job could fall to Michael Murray, the 28-year-old boyfriend of Ashley’s daughter.

Shoppers at the House of Fraser in the Gateshead Metro Centre, the nearest shop to St James’s Park, where Ashley’s Newcastle United team were playing yesterday afternoon, expressed mixed feelings.

Jill Brown, 45, said: ‘If I was one of his employees I would be very concerned, knowing what we do of Sports Direct and their zero hours contract and poor conditions. Equally, you wouldn’t want him to fail either.’