Savers will be delighted by last week’s summer ‘present’ – an increase in the Bank of England base rate to 0.75 per cent, only the second rate hike since the horrible financial crisis of 2008.

Although the impact of the increase will not be life changing, it will provide a mini-boost to many households – especially those where deposit income acts as a top-up to State and private pensions.

Of course the banks and building societies are not compelled to apply a 25 percentage point increase in interest rates to their entire range of variable rate savings accounts. But it will be extremely disappointing if they do not. 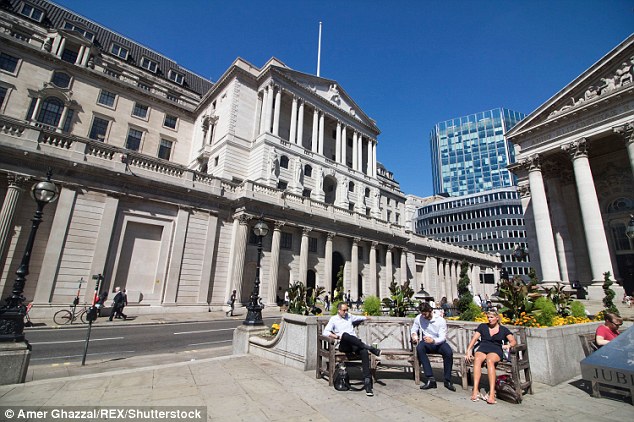 Jeff Prestridge says savers will be delighted by last week’s summer ‘present’ – an increase in the Bank of England base rate to 0.75 per cent

As Lloyds Banking Group’s results indicated last week – profits up 23 per cent in the first six months of this year – the banks are in better financial health than they have been for a long time despite lingering payment protection insurance compensation bills to still meet. Even Royal Bank of Scotland is talking about paying its first dividend for ten years

So there are no excuses for them not to pass on the full increase. Certainly, the derisory 0.05 per cent and 0.1 per cent rates that some banks have been paying savers are no longer acceptable – indeed, they never were.

As for building societies, their prime purpose in life is to act in the best interests of their customers. So anything other than passing on the full Bank base rate increase to savers will not be good enough.

With inflation still bobbing along at above two per cent, savers will still find it extremely difficult to keep their cash growing in real terms.

Their only option is to take out a fixed rate savings bond, although this will not suit many savers given that interest is usually paid annually, not monthly – and they will have to keep their money tied up for the full term unless they are prepared to pay a penalty. Rates for long term bonds – three or five years – are the most attractive.

Yet the fact remains that the lot of savers is a little rosier this weekend than it has been for a long while. Someone with a £5,000 savings balance benefiting from a 0.25 per cent rate increase will see their monthly interest income rise by a tad over £1. In these difficult times, I suppose we should be grateful for all small mercies that come our way.

Good customer service is not something this country excels at. It has not been helped by the use of offshoring, or enhanced by the widespread use of telephone systems that make it nigh impossible to speak to someone unless you are prepared to wait an eternity. As Debbie Harry of Blondie once said: ‘Don’t leave me hanging on the telephone.’ Sadly, Debbie, they do.

Even some of this country’s strongest brands are failing to deliver the customer service experience expected of them – as I have recently found out.

Last December I ordered some furniture from John Lewis – a very nice bookcase. It cost a tidy sum. All fine so far.

But then, everything went quiet. The bookcase never arrived. I suppose I should have chased it earlier but in June – six months after payment had been taken – I contacted them. Within days, the furniture appeared at my front door. But not a whisper of an apology. Not a mention of any compensation for the fact my money (£699) had been sitting in John Lewis’s vast bank account quietly earning them interest while my order remained unfulfilled. A few days ago, I decided enough was enough and rang again demanding an explanation.

Having successfully pressed all the correct keys on my phone, I was put through to a customer service operative who offered me £10 by way of compensation. A fob-off – and a rude one at that. I dug in my heels and asked for my complaint to be escalated up the John Lewis customer service food chain – a process I dubbed ‘waitrosing’.

Last weekend, a kindly gentleman phoned (he got through straightaway) to offer his ‘sincere apologies for the inconvenience caused’ and a £100 refund in the hope it would ‘restore your faith in us as a retailer’. I accepted.

Right result in the end but I do hope my experience with John Lewis is the exception, not the norm.

If this high class retailer cannot get service standards right, I fear for the very future of customer service in this country. Yet more dumbing down.