John Lewis is rated by employees as the best retailer to work for in the UK, a jobs website suggests.

The department store giant, a partnership model in which staff are offered a share of the company’s profits, came top of the list, followed by cosmetics firm Lush, Ikea and Marks & Spencer.

Posh supermarket Waitrose, which is part of the John Lewis Partnership, also made it in the list of the best retailers to work for, ranking in ninth position. 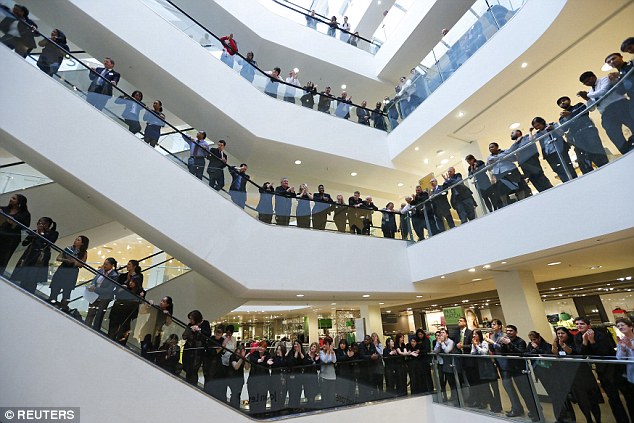 Top employer: John Lewis, whose staff are offered a share of the company’s profits

The ranking is based on thousands of employee reviews left on the individual company pages of jobs website Indeed in the twelve months to January this year.

Employees are asked to score companies on five categories which include work/life balance, pay, job security, management and culture.

Poole-based Lush, famous for its bath bombs, natural ingredients and its brightly coloured stores, has been named the second best retailer to work for.

The company scored highly for its ethical stance – it campaigns against animal testing and uses only vegetarian ingredients, among other things – flexible working hours and 50 per cent staff discount.

Dutch-based company Ikea, which was the first large retailer to commit to paying the Living Wage to all its UK staff, came in third, followed by Marks & Spencer at fourth place and shoe firm Clarks in fifth place.

Best retailers to work for in the UK

Good rates of pay were a common theme in the most favoured companies, although staff at Harrods, which came in at seventh place, seemed to be happy about the luxury store’s workplace environment and company culture, according to Indeed.

British-based companies dominate the list, accounting for 11 of the 15 most popular retail employers.

Aside from Waitrose, Sainsbury’s was the only other supermarket to make it in the list, albeit in the last place.

Kevin Walker, of Indeed, said: ‘Our research shows great brands are the ones whose staff feel valued, well managed – and part of a positive company culture.

‘Having fun, feeling like you’re having an impact and seeing that impact extend beyond the company to the world – those are the things that make a workplace really special.’

John Lewis director of personnel Libby Jones said: ‘Attracting top talent to join us is integral to our success.’