Savers have been warned they will be left bitterly disappointed if they hold out hope for an uplift in interest in the coming weeks.

Only one in ten banks have upped their interest on variable rate deals following the Bank of England’s decision to increase the base rate to 0.75 per cent a week ago.

In contrast, many have quickly taken the opportunity to hike costs for borrowers in a blow for homeowners that could cost them an extra £190 per year, on the average mortgage.

Putting the banks to shame, however, are two tiny building societies, Beverley and Monmouthshire who have both raised all their savings rates by the full 0.25 per cent. 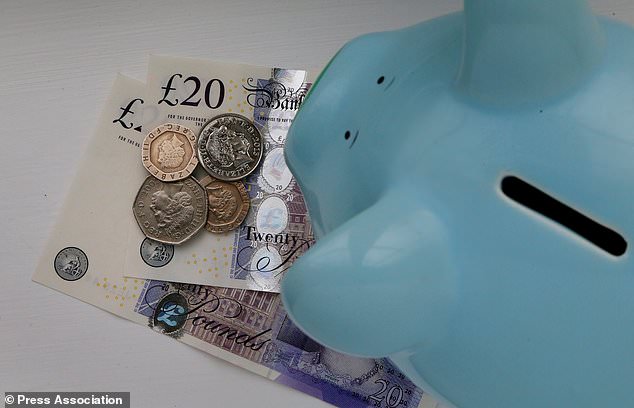 Already, 28 per cent of lenders have hiked costs for mortgage customers just a week after the base rate decision, according to information website Moneyfacts.

HSBC and Barclays have already slapped mortgage customers with an increase, but have no plans to do on savings accounts.

Santander has announced its customers will see variable and tracker mortgage rates jump from the start of next month.

Lloyds Bank has also set 1 September as the date its 0.25 per cent increase will take effect on its variable mortgages. RBS is yet to make a move.

Of those that have responded to BoE descicion, only a fraction of savings providers have passed on the full quarter of a percent rise to their variable rate savers, according to Moneyfacts.

Savers patience will be tested even further with some delaying the increases until the end of August.

Others that have nudged up their rates, have either partially applied the rise or only boosted interest on some accounts.

The smaller building societies have put the banks to shame, quick to hand savers the boost.

Beverley and Monmouthshire Building Societies have both bumped up their variable rate savings interest following the move to 0.75 per cent.

The changes will come into effect on 2 August and 1 September respectively.

Skipton BS has upped the rate on accounts opened by new customers, but existing savers will have to wait as it has said it is ‘be looking at passing on increases to those too’.

TSB has also announced an increase.

Its customers will benefit from a 0.1 per cent increase at the start of next month.

Child accounts are the only deals to benefit from an 0.25 per cent bump.

Co-operative Bank has made a similar move, adding between 0.1 per cent and 0.28 per cent to accounts.

Rachel Springall, a finance expert from Moneyfacts says: ‘It will be disappointing news for many savers to know that they may not benefit from the full 0.25 per cent base rate rise.’

‘It is a real shame, and just demonstrates why savers should think about switching and not hold their breath for a rate rise on their account.’

The delay in benefits reaching savers, compared with the swift hikes in costs to borrowers, was criticised by the head of the influential Treasury Select Committee of MPs.

Chairwoman Nicky Morgan told the Times: ‘It’s no wonder that our banks have such a lot of work to do to rebuild trust among customers when they ignore the first opportunity to give a little something back to savers, while moving speedily to increase costs for borrowers.’

There is still time for more to follow however as banks typically drag their feet following an interest rate rise.

It took around a month for most banks to review their accounts and announce any increases following the BoE announcement last November when rates rose to 0.5 per cent.

But this is yet another prompt for savers ditch the big banks that do little to reward them for their loyalty.

According to Moneyfacts data, even if the high street giants do boost savers rates by the full 0.25 per cent, most accounts still wouldn’t offer competitive deals, or even match the 0.75 per cent base rate.

Over recent years the Funding for Lending scheme has provided banks with cheap credit, meaning they no longer needed to pursue deposits from savers to fund their lending.

The only competition in the market during this lull has come from challenger banks including the likes of Atom Bank, Paragon Bank, French-owned RCI and Ford Money, offering higher rates to attract in more customers and grow their businesses.

Where to find the best savings rates

Currently the top rate on offer for easy-access savers is 1.4 per cent from Coventry BS. The account only allows three withdrawals a year, and the rate includes a one-year 0.4 per cent bonus.

One a three-year fixed rate bond the best rate available is Charter Savings Bank at 2.36 per cent followed by BM Savings and Hampshire Trust Bank just 0.01 per cent below.

The top five-year rate currently on offer is also Charter Savings Bank at 2.68 per cent.

If you want a tax-free account the best deal savers can get if they want instant access is 1.35 per cent from Virgin Money and Al Rayan Bank.

Al Rayan also takes the lead over two and three years at 1.6 per cent and 1.8 per cent respectively.

Shawbrook Bank sits top over three years at 1.85 per cent and United Trust Bank has the highest five-year rate paying 2.25 per cent.